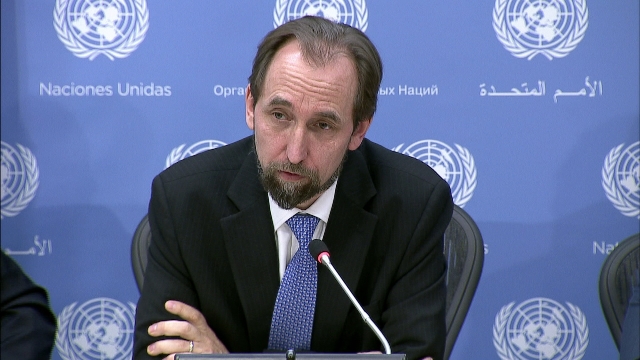 [New High Commissioner Zeid Ra’ad Zeid al-Hussein]
The on going 27th session of the UNHRC will take up number of important resolutions to be adopted at the end of this week. Although Russia, China, India and Pakistan opposes importance resolution related to democratic governance and equal rights, it is expected that following resolution will be adopted with majority vote.

As reported by the ISHR

Among the critical resolutions negotiated at this session is that on the protection of civil society space, led by a core group of Ireland, Tunisia, Japan, Sierra Leone and Chile.

The resolution has a particular focus on the role of artistic expression and creativity within civil society space, and requests the High Commissioner to compile good practices for the creation and maintenance of a safe and enabling environment for civil society.

The negotiations have been fairly protracted, with two rounds barely finished before the core group tabled the text. While the current draft makes significant concessions, it retains some of the elements that were most controversial during negotiations. This includes clear references to existing legal obligations under international law to uphold freedom of expression, assembly and association including by guaranteeing access to funding, as well as a reaffirmation of the right of civil society actors to access and communicate with international bodies.

Not surprisingly given their existing restrictions imposed on civil society, among the most vocal opponents of the resolution were the Russian Federation, China and Egypt. However they were strongly supported by India and South Africa, both of which have a rich history of active civil society and could thus be expected to be supportive of creating a safe space for them. Several Gulf States, including Saudi Arabia and Qatar, joined this group, specifically in its opposition to reaffirming the right of civil society to receive funding.

The Safety of Journalists

The tabled resolution condemns the prevailing impunity for attacks and violence against journalists and calls upon States to develop and implement strategies for combating such cases, including by using good practices identified during the Human Rights Council panel discussion held this year and in the OHCHR report published last year on the subject.

The inclusion of concrete suggestions for combatting impunity represents a positive and practical step taken by the core group of Austria, Brazil, France, Greece, Morocco, Qatar and Tunisia.

The draft insists on accountability for those who command attacks, as well as material perpetrators, and recommends the establishment of early warning and rapid response mechanisms to give threatened journalists immediate access to protective measures. Furthermore, the draft recognises that protective mechanisms designed for the protection of human rights defenders can be relevant to the protection of journalists.

Nevertheless, due to the strong opposition from Egypt, China, Russia, South Africa and Cuba, it falls short of demanding accountability for the abusive use of the legal framework against communicators and failed to explicitly condemn the widespread criminalisation seen globally, which could have strengthened the resolution’s impact.

The draft resolution on human rights, sexual orientation and gender identity initiated by Brazil, Chile, Colombia and Uruguay is a timely response to mounting concerns over increased discrimination and violence against LGBTI people in all regions of the world.

A look back at the Communications reports of the Special Procedures has shown that the violations are grave, widespread and ongoing. ISHR supports an institutional response by the UN to address violence and discrimination faced by the LGBTI population.

The resolution calls for an update to the High Commissioner’s report on sexual orientation and gender identity, with a report presented to the Council every two years. Regular reports to the Council will allow for discussion to build consensus around the issue. The timeframe of every two years would also enable national debates to have the space they need.

Australia has tabled a resolution encouraging States to establish National Human Rights Institutions (NHRIs) and recognising the crucial role of such bodies in promoting and protecting human rights and in preventing abuses and violations, including through advocacy and education. The resolution stresses the need for such bodies to be financially and administratively independent of government. It also encourages NHRIs to play an active role in holding governments to account for their international human rights obligations and to promote and contribute to the implementation of recommendations made by the UN human rights mechanisms.

Regrettably, the resolution does not incorporate language – suggested by Norway, Ireland and others – which would have encouraged NHRIs to establish focal points for the protection of human rights defenders. For the first time, however, it does include language condemning and calling for the investigation of reprisals against those who engage with NHRIs, together with language recognising the role of NHRIs in addressing cases of reprisals against those who cooperate with the UN. This important language was included in the tabled draft despite objections from States such as South Africa, Egypt, Pakistan and India