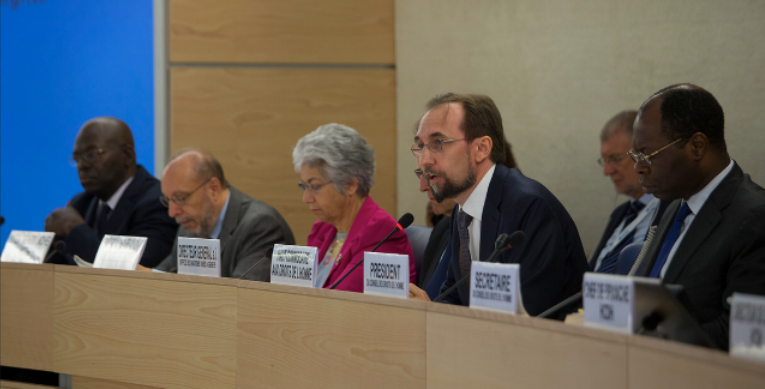 The European Union and several other countries have urged Sri Lanka to cooperate with the OHCHR Investigation into Sri Lanka, after the oral update by the UN human rights chief.

In their statement, the EU said it regrets the position of Sri Lanka not to cooperate with the investigation by OHCHR into alleged violations and abuses, urging the government to reconsider its position. The bloc also expressed concern at efforts to restrict activities of civil society in Sri Lanka, calling on the government to respect the right to freedom of expression, association and assembly, including by ensuring that individuals can engage with the UN mechanism, and ensure accountability for harassment and intimidation.

The EU added it “deplored” serious episodes of violence against religious groups, including Muslims, Christians and Hindus.

The United Kingdom aligned itself with the EU statement, welcoming the update by the high commissioner and expressing its strong support for the OISL. The UK expressed concern at reports of reprisals against those who cooperated with the OISL, and noted that no prosecutions had been brought against those responsible for the anti-Mulsim violence in June, despite President Rajapaksa’s promise to bring perpetrators to justice.

India calls for withdrawal of military from North

India in its statement to the council noted with concern that the High Commissioner did not say how the OHCHR will take the OISL forward, given that Sri Lanka is not cooperating.

India called on Sri Lanka for timely implementation of the LLRC and to continue to use the recommendations of the commission as a basis for reconciliation, including the return of private land and the withdrawal of the military from the Northern Province.

Pakistan expressed its view that for a fruitful outcome of country specific resolutions at the Human Rights Council, it will need the full support of the concerned country. The resolution on Sri Lanka was an exception that must not be quoted as a precedent for the future work of council. Pakistan commended Sri Lanka’s efforts, adding that the international community needs to appreciate Sri Lanka rather than punish it for rooting out terrorism. It further called upon countries sheltering and facilitating “former elements of the LTTE”, to ensure that this is not allowed to impede Sri Lanka.

China said in its address that the primary responsibility of human rights lies with the government in question and it was the duty of the international community to only provide assistance when a government requests this. Since end of conflict SL has devoted itself to national reconciliation and development, China said. Welcoming these developments, China expressed regret that these were not fully represented in the High Commissioner’s oral report. China pointed out that Sri Lanka received the Special Rapporteur on migrant workers and called on the international community to support national reconciliation efforts.

The Canadian mission thanked the OHCHR and OISL for its important work and said it shares many of the concerns expressed in the High Commissioner’s report. Canada expressed great concern at the continuing reports of stifling of civil society efforts and said it deeply regrets Sri Lanka’s continuing unwillingness to cooperate with the investigation. Although Canada is dismayed by the refusal to allow the investigation team access, it said it was encouraged that the OISL will continue despite that and that those wishing to submit evidence should be able to do so without fear of reprisals.

Montenegro, one of the sponsors of the resolution establishing the investigation, said it fully supports efforts for justice and reconciliation. Echoing the EU statement, Montenegro said it was imperative that the international community acts towards those goals. While taking note of the “important steps” made by Sri Lanka, it expressed concern at the vote by the parliament against the OISL.

Ireland said the investigation team has to be allowed to collect witness testimonies and that no one should be subject to reprisals, while the Philippines stressed the importance of timely accountability for reconciliation. Switzerland called on the Sri Lankan government to allow the Northern Provincial Council to fully function, noting that it was still not able to do so.