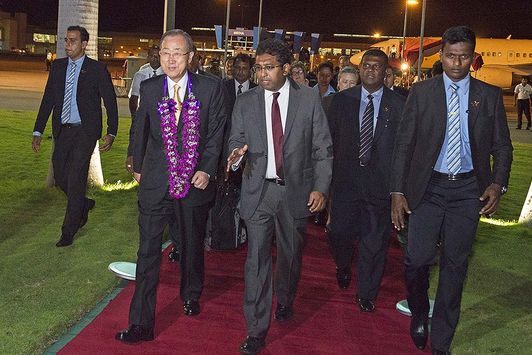 The United Nations has a rare opportunity to help secure a sustainable peace, writes Alan Keenan

When UN secretary-general Ban Ki-moon touched down in Sri Lanka yesterday, he arrived in a very different country from the one he last saw, immediately following the end of the civil war. Back then, in May 2009, he was shocked by the physical devastation and human toll of the final months of war, when as many as 40,000 civilians are believed to have been killed in the north and east. The internal review he ordered faulted the United Nations for its “systemic failure” to protect human rights and civilian lives at the war’s end.

Today, much of the physical damage has been repaired. Since 2015, a new government led by president Maithripala Sirisena has championed a reform agenda that includes important commitments to end impunity, promote the rule of law, and encourage reconciliation. Yet political, social and psychological wounds run deep throughout the country, threatening the fragile progress made so far.

The UN has a mixed history in Sri Lanka. On Ban’s last visit, the country was ruled by president Mahinda Rajapaksa and his powerful family, riding high on the wave of triumphalism and Sinhala nationalism that followed the military’s defeat of the Tamil Tigers. A panel of experts Ban appointed in 2010 found credible allegations of war crimes and crimes against humanity by both sides. Although it was denounced by the government and its nationalist supporters, the panel’s report contributed to the series of increasingly strong resolutions by the UN Human Rights Council calling for accountability and reconciliation.

The defeat of Rajapaksa and election of Sirisena as president in January 2015 opened unexpected space in Sri Lanka for the Human Rights Council’s resolutions to be acted on. It also marked a growing acceptance that reconciliation required accountability for war crimes and for corruption and the abuse of power.

Sirisena’s new government co-sponsored a landmark resolution adopted by the Human Rights Council in October 2015, which committed his administration to establishing offices on missing persons and reparations, a truth commission, and a special court to hear cases of alleged crimes during the war – including extrajudicial killings, torture, rape and sexual violence. The government also promised to investigate other human rights cases, restore the independence of the judiciary and police, reduce the role of the military and agree on constitutional reforms to address the political marginalisation of Sri Lankan Tamils, which gave birth to the years of war and terror.

UN agencies are actively supporting the Sirisena government’s reform agenda, but government efforts have been under-resourcedand weakened by mixed messages and confused lines of authority. Clear direction from the president and from prime minister Ranil Wickremesinghe has been lacking. While there is much greater space for dissent, some improvement in rights protections, and progress towards a new constitution, there has been no decisive break with the culture of impunity. Meanwhile, key sectors within the government are actively undermining reforms.

Take, for example, the government’s pledge to the Human Rights Council that it would replace the Prevention of Terrorism Act with new laws consistent with human rights standards. Despite that undertaking, police continue to make arrests under this repressive legislation, and some 200 Tamils are still detained under its provisions, many held for years without charge.

Security officials have reportedly interfered with police investigations that implicate military intelligence units in murders and abductions during the Rajapaksa years. Defence budgets have grown and the military remains a powerful presence in Tamil majority regions, running hotels and other businesses and occupying large amounts of private land. Tamils are increasingly angry at the government’s failure to live up to its promises on all these issues.

Ban should urge that the military cooperate with the police and judiciary. He should also offer UN assistance for the Sri Lankan military’s transition to peacetime duties in two ways: by helping to assess its landholdings and assisting families returning to previously occupied land, and by assisting with job training for retiring soldiers and psycho-social support to veterans and families.

While parliament’s approval earlier this month of a bill to establish the Office on Missing Persons is a welcome first step, Ban must press the president and prime minister to implement all of its promises to the Human Rights Council. A key element of these commitments is a special court for war-related crimes, with the “participation… of Commonwealth and other foreign judges, defence lawyers and authorised prosecutors and investigators.” With nationalists arguing this is an infringement on Sri Lanka’s sovereignty, the president and prime minister have reversed position and rejected foreign judges.

Although the Sirisena government co-sponsored the Human Rights Council resolution last year, it now seems to be dragging its feet. It appears increasingly that the government does not intend to pass the legislation needed to establish the special court before the Council meets in March 2017, a move that could help to evade further international scrutiny.

Ban must make clear his support for continued oversight by the UN Human Rights Council until the government has passed the legislation needed to establish a strong court with the legal basis and the expertise – including international participation – to prosecute war crimes and crimes against humanity. Even if the government succeeds in winning approval for a constitution that reflects Sri Lanka’s ethnic, linguistic and religious diversity, that will not be enough to ensure reconciliation in the absence of accountability.

Ban should encourage Sirisena and Wickremesinghe to make a much stronger public case – especially to Sinhalese communities – in support of their transitional justice and constitutional initiatives. While resistance from Sinhala nationalists and the Rajapaksa-led opposition is real, strong public outreach and the government’s two-thirds parliamentary majority provide a once-in-a-generation opportunity to address both the causes and consequences of Sri Lanka’s thirty years of war. As part of this, Ban should also urge that the design of the court and the truth commission take into account the recommendations of public consultations now under way across the island.

Finally, Ban should acknowledge the UN’s failure to protect Sri Lankans during the final months of the war and its immediate aftermath, and commit the UN to an active role defending rights through its ongoing work in Sri Lanka. This should include an expanded presence of the Office of the High Commissioner for Human Rights and improved vetting of the human rights record of military personnel who serve in UN missions – particularly with respect to allegations of sexual abuse.

Above all, UN member states must back up Ban’s words with the right combination of encouragement and pressure needed to deepen and sustain the potentially historic transformation now under way in Sri Lanka. With the UN’s help, Sri Lanka could yet build a state that respects the rule of law and protects the rights of all its citizens. •