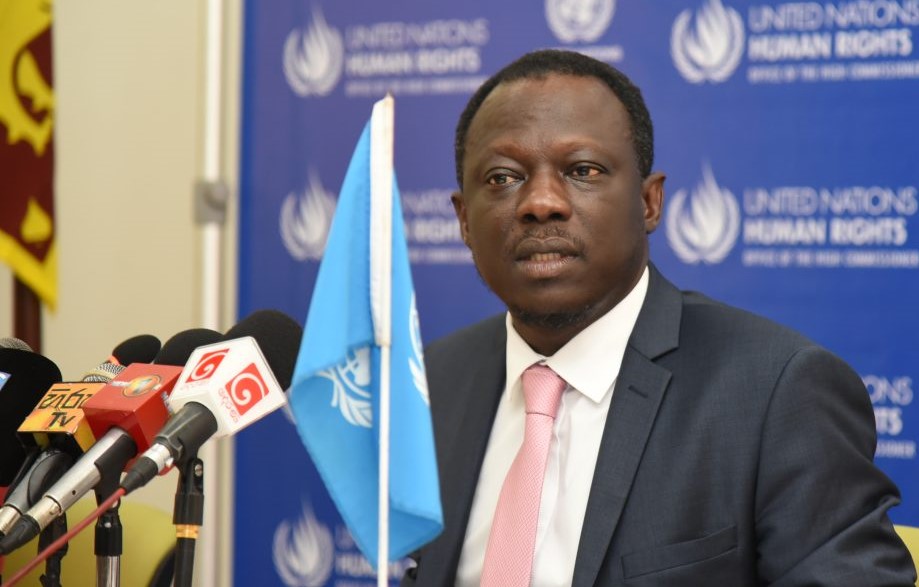 90. While Sri Lanka has made valuable democratic strides in the last five years, a prevailing apprehension exists among civil society, who fear there could be rollbacks on these gains in the future. Sri Lankans fear the dismantling or undermining of fragile yet important institutions that safeguard their democratic rights, and a shift back to media restrictions, governmental opacity and a climate that requires selfcensorship. This must not be allowed to happen.

91. While national legislation adequately protects the rights to freedom of peaceful assembly and of association for the most part, the unequal application of the laws, including informal refusal to enact laws at an administrative level, seriously affects the enjoyment of these rights. Ethnic and religious discrimination, mistrust in State authorities and the heavy militarization of certain areas must be immediately tackled in order to fully realize the enjoyment of human rights in the country. Furthermore, if perpetrators of gross human rights violations are permitted to enjoy and profit from a climate of impunity, it will serve to undermine people’s confidence in State institutions and jeopardize the country’s progress towards sustainable democracy and development.

92. The vital role that civil society plays in the promotion of democracy, providing checks and guidance on governmental actions in the promotion of universal human rights standards, must be nurtured. Civil society is a necessary and essential conduit for the voice of the people, and civil society actors must strive to work together in a coherent fashion in order to ensure that they adequately fulfil their role. Their actions have been instrumental in the widening of democratic space that the country has experienced since 2015, and they will continue to be instrumental in the fight to maintain and increase those gains.

93. More must also be done on social cohesion to unite people and communities, embracing their differences and rebuilding trust in order to work towards the full enjoyment of human rights for all in Sri Lanka. First steps towards this must necessarily include the even application and rule of law, an end to impunity, and meaningful transitional justice and reconciliation processes, in line with the commitments of the Government of Sri Lanka as contained in Human Rights Council resolution 30/1.

94. The Special Rapporteur recommends that the Government:

(a) Ratify and implement the Second Optional Protocol to the International Covenant on Civil and Political Rights, aiming at the abolition of the death penalty;

(b) Undertake a review of the Constitution with a view to extending the fundamental rights contained therein to all those under the Government’s jurisdiction, including migrants, refugees, asylum seekers and other non-citizens, as per the requirements of the International Covenant on Civil and Political Rights;

(c) Consider repealing article 16 of the Constitution, which forbids judicial review of existing legislation that violates the rights to freedom of peaceful assembly and of association, and other fundamental rights;

(e) Complete its review and repeal of the Prevention of Terrorism Act, replacing it instead with legislation that is fully compliant with international human rights norms and standards, in continued consultation with civil society; implement the recommendations made by the Special Rapporteur on the promotion and protection of human rights and fundamental freedoms while countering terrorism with regard to the draft Counter-terrorism Act, and immediately establish a moratorium on the use of the Prevention of Terrorism Act for new arrests until it is repealed;

(f) Implement comprehensive security sector reform and demilitarization, in line with the country’s transitional justice commitments under Human Rights Council resolution 30/1, and order all security forces to immediately end all forms of surveillance and harassment of and reprisals against human rights defenders, other actors, and victims of human rights violations;

(g) Maintain engagement with the United Nations peacebuilding architecture, in particular the Peacebuilding Commission, through regular updates on progress made in implementing the country’s Peacebuilding Priority Plan and the sharing of and benefiting from good practices and experiences related to transitional justice and reconciliation processes;

(h) Provide support to important institutions such as the Constitutional Council, the Office on Missing Persons, the Office for Reparations and the Human Rights Commission of Sri Lanka, ensuring that they are able to continue to work independently and with sufficient resources to discharge their mandates;

(i) Safeguard the democratic gains made by the country in the last five years, including through the preservation of the Nineteenth Amendment to the Constitution;

(j) Guarantee a vibrant civic space, where all civil society actors are able to carry out their work in a safe and enabling environment, free from threats or acts of violence, intimidation, surveillance, or any other form of harassment, including judicial harassment and reprisals;

(k) Ensure that the rights to freedom of peaceful assembly and of association can be effectively exercised, in law and in practice, fulfilling the indispensable role that they play in the promotion of a fair, free, pluralistic and democratic society where minority and dissenting views are respected;

(l) Take steps to address the perceived climate of impunity by improving access to justice, promoting and mainstreaming human rights through its legislation, procedures and other actions, and taking resolute steps towards bringing the perpetrators of human rights violations to justice.

95. With regard to peaceful assembly, he recommends that the Government:

(a) Consider revising the laws and regulations relating to freedom of peaceful assembly in order to ensure their compliance with international human rights norms and standards;

(b) Consider developing clear and accessible guidance based on the laws and regulations regarding the right to freedom of peaceful assembly in order to facilitate the organization of assemblies according to law, both by organizers and law enforcement authorities;

(c) Consider amending the law regarding notification procedures in order to allow for the occurrence of spontaneous or urgent assemblies without risk of criminality;

(d) Refrain from using national security legislation, including the Prevention of Terrorism Act, to criminalize protesters legitimately exercising their right to freedom of peaceful assembly;

(e) Refrain from shutting down the Internet, in whole or in part, which always contravenes international human rights standards, and work collaboratively with civil society, the media, Internet service providers, and social media companies in order to find effective and evidence-based solutions to counter violent content and disinformation online, in a manner consistent with international human rights law;

(g) Ensure that any court orders sought in order to prevent or stop an assembly allow organizers adequate time and opportunity to challenge them, and also ensure that organizers of protests are not held personally accountable for illegal acts committed by others in the context of the protests that they have organized;

(h) Ensure the safe exercise of the right by groups such as national and religious minorities, LGBTQI+ groups, children and women, including by protecting them from attacks, harassment and intimidation by third parties;

(i) Ensure that all incidents in which the actions of security forces have resulted in human rights violations, in particular death and injury, are promptly, independently and transparently investigated and prosecuted, including the Rathupaswala, Welikada prison and Roshan Chanaka cases.

96. With regard to the right to freedom of association, the Special Rapporteur recommends that the Government:

(b) Engage in meaningful consultation with civil society and the National Human Rights Commission on all relevant legislation, including at the drafting, review and implementation stages, especially when such legislation pertains to an alteration in the status, rights or obligations of associations, such as NGOs and trade unions;

(c) Ensure that all administrative authorities at the national, divisional and district levels dealing with the right to associate are duly trained on international human rights norms and standards in order to create a favourable and enabling environment for civil society to operate;

(d) Provide an avenue of appeal in cases where the Ministry of Defence denies the registration of an association on the basis of national security, and ensure that reasons for refusal are provided in writing at the earliest possible opportunity;

(e) Ensure the rights to form and join trade unions, both inside and outside of free trade zones, and guarantee their rights to strike and collectively bargain,including through the removal of the 40 per cent threshold in this regard; also ensure that no restrictions are placed on the right to strike, other than those listed as permissible under articles 21 and 22 of the International Covenant on Civil and Political Rights;

(f) Accurately measure and record the membership and representative status of trade unions and engage in efforts to promote fruitful interactions between them, with the aim of improving labour standards, guaranteeing labour rights and assisting in the realization of common goals;

(g) Ensure the full implementation of the recommendations contained in the reports of the Committee of Experts on the Application of Conventions and Recommendations.

97. The Special Rapporteur calls on civil society organizations, including trade unions, to:

(a) Continue to work together, speaking with a united and coherent voice towards the realization of common goals, such as the promotion and protection of human rights, democracy, rule of law, sustaining peace and justice;

(b) Work collaboratively with the Government at every opportunity in order to advocate for the mainstreaming of human rights through legislative instruments and policy implementation;

(c) Advocate to maintain the democratic progress that the country has made in the last five years and continue in the pursuit of an expansive and vibrant civic space that is respectful of minority and dissenting views;

(d) Continue its advocacy and monitoring work in relation to the rights to freedom of peaceful assembly and of association and enhance engagement with United Nations human rights mechanisms, including the special procedures and treaty bodies;

(e) Continue fighting against impunity for past and present violations of human rights, with a view to seeking justice, accountability and redress for victims;

(f) Follow up and monitor the implementation of the recommendations contained in the present report.

98. The Special Rapporteur calls upon the United Nations, other international organizations and other stakeholders to:

(a) Continue working with Sri Lanka towards the fulfilment of all of its international obligations, including those pertaining to human rights and transitional justice;

(c) Support Sri Lanka in its efforts towards achieving the Sustainable Development Goals;

(e) Monitor the implementation of the recommendations contained in the present report.

Read the full report as a PDF: Report of the Special Rapporteur on the rights to freedom of peaceful assembly and of association_HRC_44_50_Add.1_E