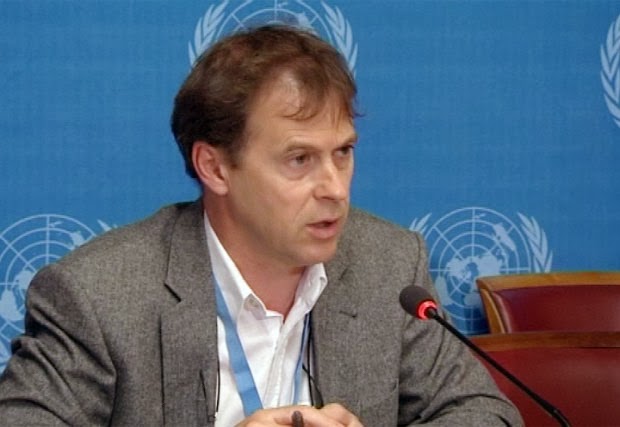 The United Nations’ rights Chief Navi Pillay, who is investigating allegations of war crimes by Sri Lanka, is the target of a smear campaign by Colombo, her office said Friday.
Pillay’s spokesman Rupert Colville said there had been no letup in the “extraordinary array of distortion and abuse” the UN high commissioner for human rights faced from Sri Lankan officials during a fact-finding mission there last month.

“We consider it deeply regrettable that government officials and other commentators continue what appears to be a coordinated campaign of disinformation in an attempt to discredit the high commissioner or to distract from the core messages of her visit,” Colville told reporters.

Pillay is probing allegations of war crimes by Sri Lanka, four years after the end of a Tamil separatist war that according to UN estimates claimed up to 100,000 lives between 1972 and 2009.

A military offensive in 2009 crushed Tamil Tiger rebels who at the height of their power controlled one-third of Sri Lanka’s territory, but rights campaigners say Sri Lankan forces killed thousands of civilians in the process.

Pillay is a South Africa of Indian Tamil heritage, and during her visit she slammed “deeply offensive” Sri Lankan claims that she was a tool of the rebels.

She called the Tamil Tigers a “murderous organisation” which should not be glorified by the world’s Tamil diaspora.

At the end of her mission on August 31, Pillay accused President Mahinda Rajapakse’s regime of rising authoritarianism.

Sri Lanka charged Pillay was meddling and overstepping her mandate.

Colville said Pillay’s office had on September 12 sent a formal complaint to the government over widely reported remarks by Defence Minister Gotabaya Rajapakse, who is also the president’s brother.

Rajapaksa has claimed that Pillay demanded Sri Lanka remove the statue of its first prime minister from Independence Square in Colombo.

“This claim is without a shred of truth,” said Colville.

The United Nations’ top human rights official lashed back Friday at the Sri Lankan government, accusing some of its most senior officials of waging a disinformation campaign aimed at discrediting her and her office.

U.N. High Commissioner for Human Rights Navi Pillay, in a statement that’s unusual for a top U.N. official to direct at a U.N.-member country, took aim at Sri Lanka’s powerful Defense Secretary Gotabhaya Rajapaksa, the brother of President Mahinda Rajapaksa, and other government officials, on the heels of her visit to the South Asian island nation last month.

During the visit at least three government ministers “joined in an extraordinary array of distortion and abuse” which is continuing now, Pillay’s spokesman, Rupert Colville, told reporters in Geneva. “We consider it deeply regrettable that government officials and other commentators continue what appears to be a coordinated campaign of disinformation in an attempt to discredit the high commissioner or to distract from the core messages of her visit.”

At the end of her visit, Pillay issued a hard-hitting statement that democracy was being undermined and the rule of law eroded in Sri Lanka, with the country increasingly becoming an authoritarian state, despite the end of its civil war four years ago.

The government responded that she had violated her mandate by making political statements. The defense secretary said her visit was influenced by propaganda from remnants of the Tamil Tiger rebels who lost the war.

The Tigers were fighting to create an independent state for ethnic minority Tamils, saying they faced discrimination from the Sinhalese majority.

A U.N. report says that as many as 40,000 people may have been killed in the final phase of the civil war, and Pillay’s visit followed a resolution in the U.N.’s 47-nation Human Rights Council in March that urged Sri Lanka to investigate more alleged war crimes committed by government forces and Tamil rebels. She is due to report her findings on Sri Lanka before the Geneva-based Council next week.

On Sept. 12, Pillay’s office sent a formal complaint to the Sri Lankan government demanding that it immediately retract and publicly correct “misinformation which has — not surprisingly — aroused much disquiet in Sri Lanka,” Colville said.

Pillay complained that the defense secretary made widely reported but false claims that she had asked President Rajapaksa during their private meeting to remove a statue of Sri Lanka’s first prime minister from Colombo’s Independence Square.

“Firstly, we categorically deny that the high commissioner ever uttered a single word about the statue of Prime Minister D.S. Senanayake at any point during her visit to Sri Lanka, let alone asked the president to remove it. This claim is without a shred of truth,” Colville said. “Secondly, there has been a further distortion concerning comments the high commissioner made to the president concerning a flag in Independence Square.”

Pillay told the president she was concerned about “rising inter-communal tensions and incitement to violence on the basis of religion in Sri Lanka,” and asked the president why the flag of one religious community — the Sinhalese — was flying next to the national flag in such a symbolic location, Colville said.

She suggested “it might be more inclusive to fly only the national flag,” he added. “At no time did she request any flag to be removed.
AP