UN panel on Sri Lanka and witnesses will be monitored – GoSL 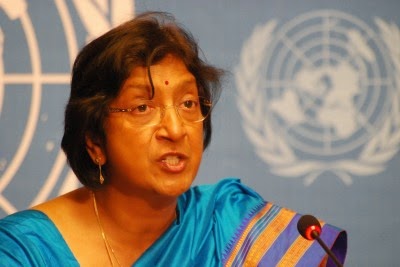 Sri Lanka will closely monitor the United Nations Panel of Experts (PoE) and those they are going to talk to in Sri Lanka, if the government decides to give the panel permission to visit Sri Lanka.
Government Spokesman, Keheliya Rambukwella, in an exclusive interview with Ceylon Today warned that if the PoE works contrary to the government’s plans and activities, then serious questions would be raised on their presence in the island.
“We reject the resolution, we reject the PoE if they work contrary to the government’s position, we reject the final report they would deliver to the UN with or without visiting Sri Lanka,” he said. “We will raise questions about their visit and all depends on what they are going to say to all those questions we raise.
It depends on the PoE’s terms of reference. If the term of references is contrary to the Constitution, contrary to the activities we carry out here, or contrary to the programme we have set out, we will raise questions.”He even warned the witnesses the PoE would talk to. “If the witnesses’ claims infringe the Constitution, we will take legal action against them,” he said.
“We have listed persons and organizations, who are questionable and who went all over the world to discredit the country. We will not allow the PoE to make reports based on their records.”
He pointed out that from the beginning, the government’s position to date has been that the material, the information gathered and the final report that was produced at the UNHRC was biased and unwarranted with no transparency.
“It’s not only us, even other member countries have completely disagreed to the setting up the PoE and made representations against it,” the spokesman added.
When asked if Sri Lanka isn’t compelled to work according to the US resolution, he claimed that “there is no compulsion and no one can force anything on us”. “We are a sovereign nation and if they raise compulsion on us, then we will raise the question of US invasion of Iraq and the mass killing of Iraqis. The same ‘champions’ are now talking about human rights in Sri Lanka.”
Not denying the fact that UN resolution is a serious issue, he also made it clear that Sri Lanka is not ‘gullible’.
“We feel they are working on an agenda suitable to them,” he stressed.
When asked isn’t the government creating ‘curiosity’ in the minds of the United Nations by not allowing the PoE visit Sri Lanka, he said, “Principally, we are not agreeable. It must be a policy based investigation. So, why should we let any Tom, Dick and Harry come here and make claims?”
He also lambasted the UNHRC sponsored resolution.”We are not concerned about Roman Statute and resolutions. What we are concerned about is that, there is an ‘injustice’ committed to us. And the fact is, it is ‘forced’ on a sovereign nation and the amount of focus and enthusiasm by the UNHRC on us, leads to a serious doubt.
We will not accept that the US is the ‘international police.
“Each one can come up with their speculations, like sanctions and the leader can be tried in Court. We are confident that they will not be able to do that. Even if they bring sanctions against us, we will take it up case by case and obtain justice,” he added.