The UK announced that it will be leading on resolutions for Sri Lanka, South Sudan and Syria, at HRC 40 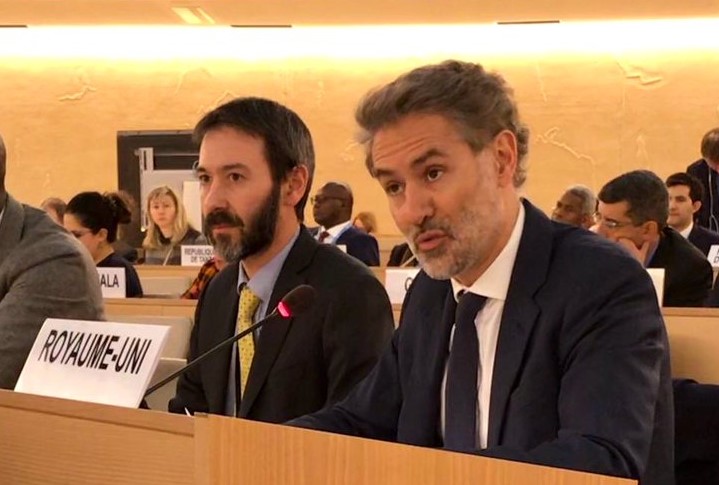 I would like to refer to 4 initiatives which the UK will present as part of core groups. These are three resolutions and one joint statement.

Firstly, the Core Group on Sri Lanka, comprising Canada, Germany, Macedonia, Montenegro and the UK will present a resolution on promoting reconciliation, accountability and human rights in Sri Lanka. The Core Group will again be working in partnership with Sri Lanka and look to continue the cooperation which began in 2015 and maintain engagement with the Council as Sri Lanka works towards the implementation of the commitments in HRC resolution 30/1.

The draft text will be procedural in nature and seek to extend further the process established by the HRC in 2015. We will hold open informal negotiations in line with standard Council practice and hope to have the full support of the Council for the resolution once again.

Secondly, a core group of countries intends to again table a resolution to renew the mandate of the Commission of Human Rights on South Sudan. We look forward to continuing to work with the Government of South Sudan and all interested partners.

Thirdly, the core group on Syria, comprising France, Germany, Italy, Jordan, Kuwait, Morocco, the Netherlands, Qatar, Turkey and the United Kingdom will present a further resolution on the human rights situation in Syria. The resolution will address the extremely serious human rights situation in Syria and renew the mandate of the Council’s Commission of Inquiry. We hope to have the support of many Council members.

Finally, on initiatives we would like to mention one joint statement. Following our successful side event last week on access to justice for children and young people, the rule of law core group comprising Ethiopia, Italy, Japan, Mexico, Morocco and the UK, we will be running a joint statement under item 8 on the same topic. We will circulate a draft well in advance and hope to have the support of many delegations.
https://www.gov.uk/government/news/uk-statement-human-rights-council-organisational-meeting

We would also like to announce one side event which we are co-organising with a number of NGOs. On 7 March at 1pm we will hold the Geneva launch of a new film entitled ‘The Long Haul’ – a film inspired by the late Professor Sir Nigel Rodley.