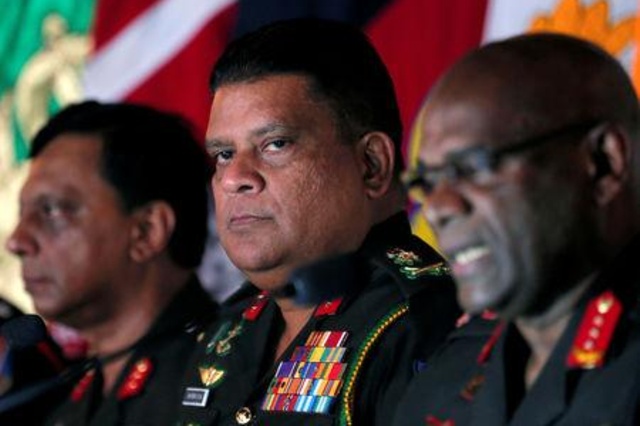 Sri Lanka’s president appointed Shavendra Silva as its army chief in August, drawing sharp criticism from the United States and the United Nations.

A U.N. panel has accused the division Silva commanded of extrajudicial executions of unarmed rebels in the final week of Sri Lanka’s civil war in 2009 and systematic torture of people in custody.

Robert Destro, the official in charge of human rights issues at the U.S. State Department, told a congressional hearing Silva’s appointment undermined Sri Lanka’s commitment to promoting accountability at a time when the need for reconciliation was paramount.

“We have made it clear to the Sri Lankan president and other senior officials that Silva’s promotion to army commander will significantly curtail bilateral cooperation with the Sri Lankan Army under U.S. law, while accountability for Silva and other perpetrators could lead to easing restrictions and greater military engagement,” Destro said in prepared testimony.

The top U.S. diplomat for South Asia, Acting Assistant Secretary Alice Wells, told the same House Foreign Affairs Committee hearing that Washington was encouraged by Sri Lanka’s progress in establishing offices for missing persons and reparations and the continued return of land in the north and east to its original owners.

However, she said progress in other areas had been slow or had stalled, including on constitutional reform, replacing the Prevention of Terrorism Act, establishing a truth and reconciliation commission, and creating a credible accountability mechanism.

She called the allegations against Silva documented by the United Nations and other organizations “serious and credible” and said the United States would actively press its human rights agenda with whichever candidate emerged victorious from next month’s election in Sri Lanka.

His victory was highly controversial. Thousands of civilians were killed, including in areas the government declared to be a “no-fire zone” that came under sustained army shelling.