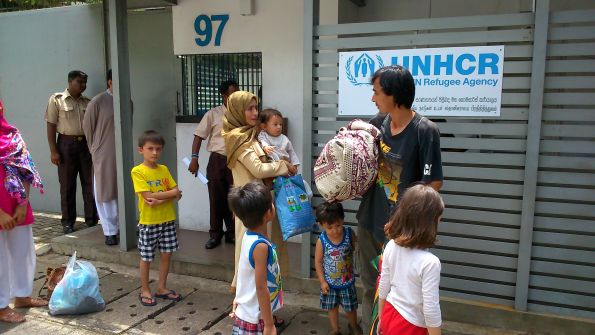 Authorities in Colombo said the influx of illegal immigrants in the past year had become a burden on state resources and potentially compromised state and regional security.

In the past two days, Sri Lanka had deported 18 people, with another 10 deportations expected on Sunday, UNHCR said in a statement, adding that the repatriations breached a “no forced return” principle.

“This principle is binding on all states and precludes them from sending asylum seekers and refugees to a country where their life or freedom would be threatened,” it said.

The Convention on Torture also forbids sending people back to places where they might be tortured, it added.

Sri Lanka’s Ministry of External Affairs said the number of refugees or asylum seekers had risen by 700 percent in the 2013-2014 period. By June 30 there were 1,562 asylum seekers and 308 refugees, it said.

“These asylum seekers are being encouraged to return, in the vital security interests of Sri Lanka and the region,” it said.

The increase in numbers was due to “people falling victim to commercially-driven human trafficking networks which abuse the liberal visa policy,” as well as a slowdown in the number of refugees resettled in other countries since 2012, it said.

The influx had resulted in serious problems for law and order, security and health, the Ministry said.

“In April 2014, 10 cases of malaria were detected among these asylum seekers. This detection was made at a time when Sri Lanka, having achieved zero indigenous cases of malaria for the past several years, was under consideration for obtaining WHO certification,” it said in a statement.

The Ministry also said the UNHCR had not helped Sri Lanka to speed up the process of dealing with refugees and asylum seekers, and had not provided financial help or housing.

Some applications for resettlement of refugees in third countries had been pending for five years, it said.

(Reporting by Tom Miles in Geneva and Shihar Aneez in Colombo; Editing by Lynne O’Donnell)