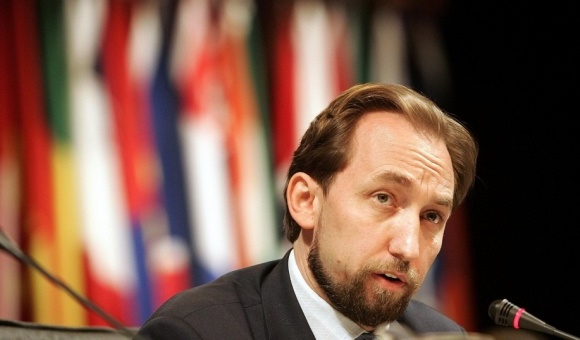 GENEVA — A top United Nations official joined the criticism of Donald J. Trump on Wednesday, warning that his election would threaten international stability.

While much of the recent furor against Mr. Trump has focused on a 2005 recording in which he made exceptionally vulgar remarks about women, the United Nations high commissioner for human rights, Zeid Ra’ad al-Hussein, focused attention back on Mr. Trump’s comments about deporting undocumented immigrants, barring Muslims from entering the country and employing torture tactics.

“If Donald Trump is elected, on the basis of what he has said already, and unless that changes, I think it’s without any doubt that he would be dangerous from an international point of view,” Mr. al-Hussein told reporters in Geneva.

Mr. al-Hussein emphasized that his office tried to stay out of politics, but he added that if an election could lead to an increased use of torture or to the persecution of “vulnerable communities in a way that suggests that they may well be deprived of their human rights, then I think it is incumbent to say so.”

Mr. al-Hussein’s comments echoed a statement he delivered in The Hague last month in which he condemned “populists, demagogues and political fantasists” who exploited economic hardship and social tensions to fan racial and religious prejudice.

Mr. al-Hussein focused those remarks on the right-wing Dutch politician Geert Wilders, but he also mentioned others whom he called “nationalist demagogues,” including Mr. Trump; Nigel Farage, a leading advocate of Britain’s departure from the European Union; Marine Le Pen of the National Front party in France; President Milos Zeman of the Czech Republic; Prime Minister Robert Fico of Slovakia; and Norbert Hofer, a candidate for the presidency of Austria.

Those politicians, he said, share with the Islamic State a fondness for “half-truths and oversimplification.”

The comments prompted Russia’s ambassador to the United Nations, Vitaly I. Churkin, to complain that by naming political leaders, Mr. al-Hussein had overstepped his authority.

Speaking to journalists in Geneva on Wednesday, Mr. al-Hussein said that he had no intention of toning down his remarks, given what he described as the prevailing permissive environment in which political leaders felt able to deliver speeches that moved beyond freedom of expression to incitement.

“When you fan resentment and seek as a political leader to pin blame on a specific community for deeper problems, real problems, this is highly regrettable,” Mr. al-Hussein said. “There are very real fears that are being stoked and exploited, and this is the point that I was trying to make.”

The high commissioner set those concerns in the context of a growing “mean spiritedness” of international political discourse, and he voiced alarm at the escalating attacks on international law particularly visible in the ferocious bombing of the eastern parts of Aleppo, Syria, in recent weeks and in the failure of the United Nations Security Council to end it.

“We look at historical experiences, and we find that we fast arrive at a point where we are unable to deal with the crises that we have in place,” Mr. al-Hussein said. “It’s as if we have now begun to forget the very real lessons drawn at the end of the Second World War about what it is we need to keep this world safe.”

United Nations officials have been fairly circumspect and have generally avoided discussing the American election cycle. Ban Ki-moon, the secretary general, said in May that he was “outraged by racism and hatred, especially when voiced by politicians and would-be leaders,” but he did not single out Mr. Trump.
NYT