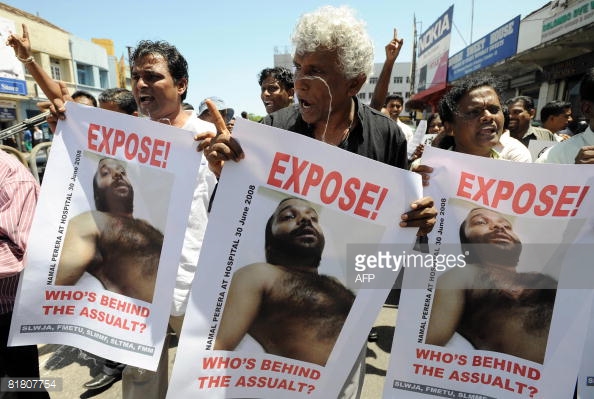 Image: Press freedom organisations was quick to organise a protest against the assault on Namal Perere.

Namal Perera had identified  three people and two out of them are militaty offciers who are in custody over number of assaults and abductions of journalists during the Rajapaksa regime.

The other four military intelligence officers were released on 200,000 rupee bail each.‍

ECONOMYNEXT – Sri Lankan journalist Namal Perera has identified two men who caused him grievous injury and tried to abduct him as he travelled with a friend at Kirulapone nearly nine years ago.

Perera, who was then a course coordinator at the Sri Lanka College of Journalism, was attacked weeks after deputy editor of the Nation newspaper, Keith Noyahr, was severely assaulted.

Perera was summoned to the Colombo Magistrate’s Court on Wednesday by the police Colombo Crime Division (CCD) to identify six suspects in custody in connection with the June 2008 assault against him.

Police reopened the case as it emerged that the same killer squad responsible for assassinating Sunday Leader editor Lasantha Wickrematunga was behind a spate of attacks against journalists and dissidents at the time.

Court officials said Perera correctly identified two of the suspects as those who took part in the daring evening attack against him and his friend’s car at Baseline Road.

The two were identified were Duminda Weeraratne who is said to have driven the white van used in the attack and Hemachandra Perera  who smashed the windscreen of Namal Perera’s car.

The two suspects were remanded till April 26 by acting magistrate Liyanarachchi who released the other four suspects on surety bail of 200,000 rupees each. However, all six went back to the remand prison as they are already in remand custody in connection with several other cases.

The attempt of the gang to take away Perera in June 2008 was foiled by residents and heavy traffic in the area at the time. The attackers travelled in a white van with false number plates.