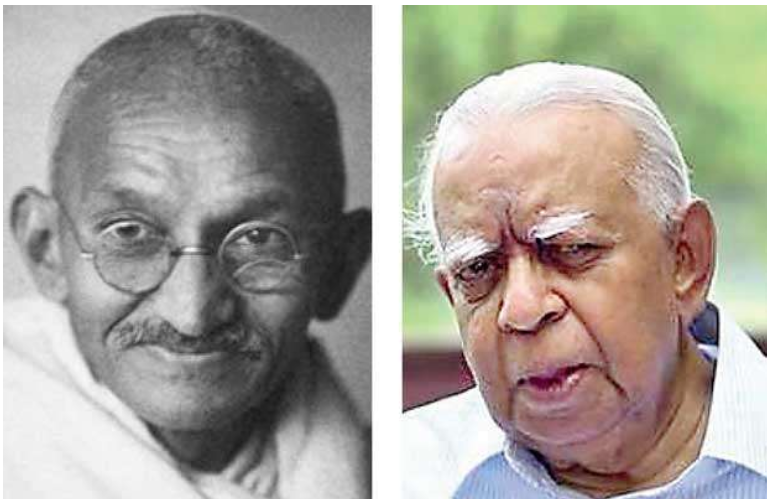 SAMPANTHAN’S PREFERENCE OF GANDHI OVER PRABHAKARAN.

SAMPANTHAN’S BLOWING HOT AND COLD INDICATES THE PREDICAMENT THE TAMIL LEADERS ARE GOING THROUGH.

THE FREEING OF PTA DETAINEES, THE RELEASE OF OCCUPIED LANDS AND THE ISSUE OF MISSING PROGRESSING IN SNAIL PACE.

THE CONFESSION ON THE ARMED STRUGGLE LAST WEEK WAS HIS UNDERSTANDING OF THE REAL GROUND SITUATION.

It is natural for one to recall the leaders of the constituent parties of the Tamil National Alliance (TNA) crowning of the Liberation Tigers of Tamil Eelam (LTTE) some time ago as the sole representatives of the Tamil people, when the TNA leader Rajavarothyam Sampanthan said last week that Tamils could have won their rights through a nonviolent struggle, rather than resorting to an armed struggle.

Yet, he seems to be sincere when he confessed on behalf of his community about the armed struggle that went on for over thirty years.

Opposition Leader Sampanthan made this remark while speaking in Parliament during the adjournment debate on the motion of tribute to Mahatma Gandhi, on the latter’s 150th birth anniversary.

“Tamils would have achieved self-rule in their areas had they followed values of Ahimsa (nonviolence) in line elucidated by Mahatma Gandhi, instead of resorting to an armed struggle.”

“There was a considerable number of Tamils elected to Parliament in 1977. We won all seats in the North and the East at this election. If we had resorted to ahimsa or a nonviolent civil disobedience campaign rather than going in for an armed struggle, we would have achieved a sufficient amount of self-rule in our areas.”

Mr Sampanthan seems to have forgotten that he had expressed a diametrically opposite view some four months ago – exactly one week before former State Minister Vijayakala Maheswaran made her controversial statement that the dream of the Tamils is to see the revival of the LTTE.

One cannot help recall the leaders of TNA crowning of the LTTE as sole representatives of the Tamil people, when TNA leader Sampanthan said last week that Tamils could have won their rights through a non-violent struggle, rather than resorting to an armed struggle

Speaking at Veerasingham Hall in Jaffna – the same venue Ms Maheshwaran made her statement- on June 24, when a book penned by Northern Chief Minister under the title “Neethiarasar Pesukirar” (The Justice Speaks) was launched, the Opposition Leader said that what the LTTE had launched was a just struggle and accused the international community of destroying the organisation.

Sampanthan and some other TNA leaders have in the past as well expressed their commitment towards the nonviolent form of struggle to win the rights of Tamils.
But here he is for the first time confessing that the armed struggle, which was launched first by so many Tamil armed groups and later became the monopoly of the LTTE, was wrong.

It was in a way rejection of the armed struggle by the Tamil armed groups as a waste.

The LTTE still draws a considerable amount of sympathy and support from the people in the North, which is well demonstrated by the ovation former State Minister Vijayakala Maheswaran received when she made her controversial statement.

Hence, it is astonishing to note that nobody had come forward so far to condemn the TNA leader over his restrained rejection of the armed struggle waged by the LTTE in the name of the Tamils.

Northern Province Chief Minister and TNA’s other adversaries who are always awaiting even a slip of the tongue on the part of the TNA leaders to take political mileage did not seem to attempt to rouse the Tamil sentiments over the statement made by Sampanthan.

In a way, it is difficult for the TNA’s northern rivals to condemn this statement under the present circumstances.

If one is to contest Sampanthan’s contention that Tamils would have achieved their rights by following Ahimsa instead of resorting to an armed struggle, he or she would have to endorse the LTTE’s war against the Sri Lankan State and glorify the organisation’s activities.

It was only days ago that Ms Vijayakala Maheshwaran was enlarged on bail after being arrested over her statement made on June 2.

The incident might have prevented others from defending the LTTE’s war, at least for the moment.

A statement similar to that of Sampanthan was once made by none other than the Advisor of the LTTE Anton Balasingham. During a function to declare open a courts complex of the LTTE in Kilinochchi in 2003, Balasingham said that the LTTE could have accepted the set of proposals presented by the Chandrika Kumaratunga Government in 1995.

The proposals generally called then “Package”, provided for the devolution of powers to the provinces, with the nature of the country being described as a ‘Union of Regions’ instead of Unitary State.

The difference between the statements by Sampanthan and Balasingham is that Sampanthan says the whole armed struggle by the Tamil groups was unnecessary whereas Balasingham said that the LTTE shouldn’t have continued the war after June 1995.

The package was drafted by the then Constitutional Affairs Minister Professor G.L. Peiris in collaboration with Dr Neelan Thiruchchelvam, a legal luminary and a respected leader of the Tamil United Liberation Front (TULF).

Dr Thiruchchelvam was killed by an LTTE suicide bomber at Kynsey Road in Colombo in 1999 for this offence which Balasingham later valued.

Sampanthan’s statement was so important because the war between the armed forces and the LTTE had claimed thousands of lives- most of them were Tamils.
When one rejects that armed struggle, he is in some way holding those waging the war responsible for those lives. But the moderate Tamil leaders cannot absolve themselves from that responsibility as it was they who developed the theoretical background for the armed struggle for a separate Tamil State.

Despite the fact that Velupillai Prabhakaran killed former Jaffna Mayor Alfred Duraiappah in 1975 for being a supporter of the then United Front Government, it was the famous Vaddukkoddai Resolution in 1976 that laid the ideological foundation for the Tamil Eelam demand.

At the 14th Convention of the Ilankai Thamil Arasu Katchi held in Batticaloa in 2012, Sampanthan said:

“The Tamil United Liberation Front, of which our party was a member, took the historic decision to establish the Separate Government of Tamil Eelam in 1976. Based on this decision of our party, and the need to place ourselves in a position of strength, Tamil youth decided to oppose violence with violence and began to rise up as armed rebel groups.”

Countries have been divided through nonviolent political processes. Norway’s secession from Sweden in 1905 and the division of Czechoslovakia into republics of Czech and Slovakia after the dismantling of the Soviet system in the East European countries in 1991 were cases in point.

However, there was no such a political atmosphere in Sri Lanka when the said resolution was passed at the special convention of the TULF in Vaddukkoddai on May 14, 1976.

However, in 2,000 some unidentified force reunited them and the moderate Tamil leaders except those of the Eelam People’s Democratic Party (EPDP) accepted the LTTE as the sole representatives of Tamils and started to justify all actions by the latter.

Sampanthan’s blowing hot and cold on the activities of the LTTE indicates the predicament the Tamil leaders are going through now.

The justification of the LTTE’s war four months ago was the manifestation of the frustration in them over the snail pace progress in releasing the PTA detainees,

releasing of the lands occupied by the security forces in the North and the issue of persons gone missing during the war.

On the other hand, the confession on the armed struggle last week was his understanding of the real ground situation.