CPA Condemns Censorship of ‘Unframed’ at the University of Peradeniya 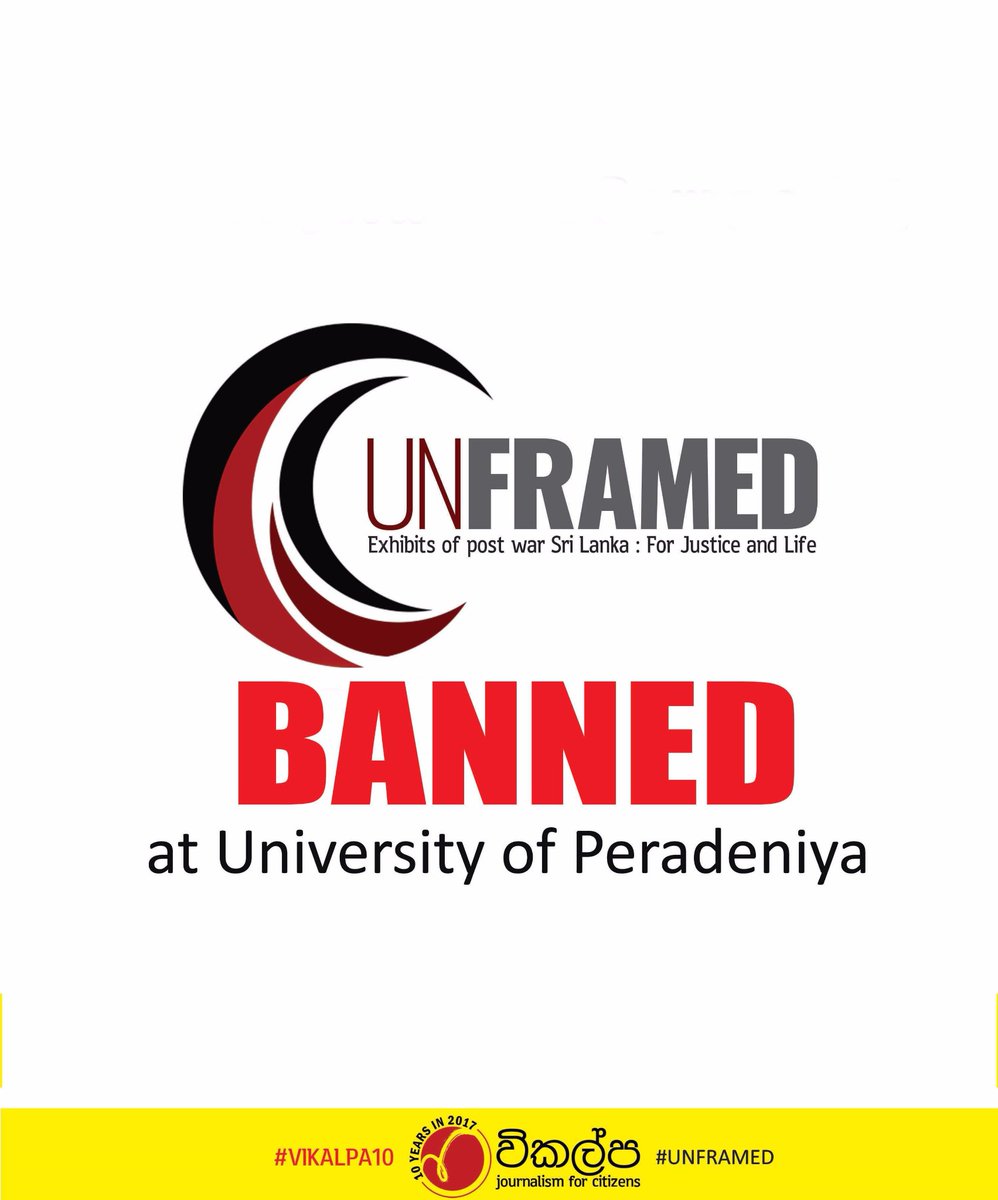 18 October 2018, Colombo, Sri Lanka: ‘Unframed’ is a compelling collection of photography, curated by Vikalpa, the Sinhala civic media platform anchored to the Centre for Policy Alternatives (CPA). The exhibition highlights and places in context critically acclaimed photography featured on the site or taken by editorial staff over ten years.

This week, the exhibition was blocked from showcasing content at University of Peradeniya in Kandy.

Starting around October 15th, however, a slew of comments and content online inciting hate, including death threats, were levelled against the exhibition, Vikalpa and in particular its Editor, Sampath Samarakoon. The organisers at the University of Peradeniya decided to suspend the exhibition on October 16th, the day it was to open to the public. On the same day, at 5pm, a discussion which was attended by a large number of students took place at the Management Faculty of the University. The University of Peradeniya Student Union as the organisers and the Literary Subcommittee led the discussion.

A group of students who attended the meeting said that the exhibition should not be showcased on the grounds that it was linked to a non-governmental organisation, that the material displayed was about and supportive of the LTTE and that Vikalpa itself was supportive of the LTTE, since the exhibition showed many photographs of Tamil people. Distressingly, another reason this group averred the exhibition would never be allowed to be shown on University grounds was that it featured photographs of Prageeth Eknaligoda, an individual they said deserved to be disappeared.

The students also rejected the idea that land-grabs had taken place and the occupation of private land by the State. Noting that photographs framing political prisoners were actually members of the LTTE, they went on to say that Sinhalese who remained the majority population in Sri Lanka, were a majority on campus too. Adding that they co-existed harmoniously with Tamils and Muslims, they said there was no space or room for any further debate around this.

The organisers stated that banning this show was censorship, noting that showing the photographs would lead to a more informed debate on these issues. However, the group of students opposed to ‘Unframed’, growing visibly more agitated and intolerant, responded insisted they would not allow it to be shown.

CPA believes the action of this group of students at University of Peradeniya to block and ban ‘Unframed’, particularly in the manner they did, is an attack on the freedom of expression. It is both risible and tragic that this behaviour, invective and mindset continues to flourish  within a tertiary education system intended to produce scholars and academics who can think critically. CPA also notes with concern that what Vikalpa staff and ‘Unframed’ faced in Peradeniya occurs at a time when the freedom of expression and the critical appreciation of media, including inconvenient narratives, particularly within the University system, is under threat and at risk in the North as well as the South.

CPA believes the measures taken to block ‘Unframed’ pose a serious threat, larger than the exhibition itself, around the future of meaningful reconciliation and transitional justice processes, post-war. The raison d’etre of ‘Unframed’ is to showcase the lives of fellow citizens for whom justice, equality and equity remain elusive. The exhibition captures ground realities that are hidden, marginal or forgotten. The action by some students at the University of Peradeniya sets a precedent and creates a context of anxiety and fear for those who champion critical reflection of contemporary politics and post-war realities.

Unreservedly condemning what led to ‘Unframed’ being blocked by those who represent a deeply debilitating, disturbing illiberalism and intolerance, CPA calls for a full investigation of this incident by relevant authorities, as well as a broader, deeper discussion amongst faculty, staff and students at the University of Peradeniya, and beyond.