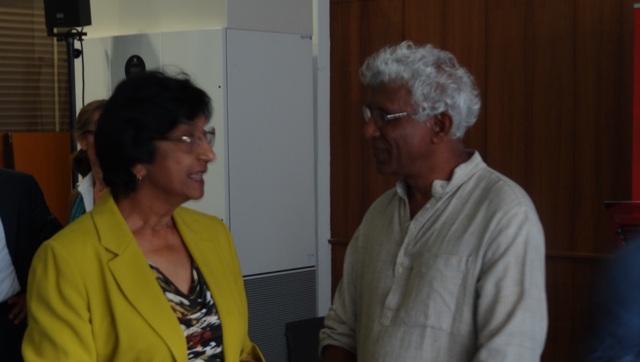 Navi Pillay, the UN High Commssioner for Human Rights will conplete her term end of this month, after being the person who held this post the longest after the inception of the UN Human Rights Council.

She is one of us.

That is because she has been a human rights defender in the past and even today.

When she was appointed as the UN High Comsmsioner for Human Rights in September 2008 a key word used to intriduce her was that she is a human rights defender. She will go back to being one.

Recently, human rights organizations based in Geneva held a farewell evening  for her. “I will rejoin you as a human rights defender as I leave this position” were her concluding words during that occasion.

A strong and broadbased network is needed to promote and protect human rights. Today, President Rajapakse’s political project is aware of the challenge that could be posed by such a network, and that’s why media, legal and civil activists in Sri Lanka have become targets. Navi Pillay has helped us, all human rights defenders in Sri Lanka by keeping our rights on the agenda of the UN’s Human Rights Council. As the Human Rights High Commissioner she has been consistent defender of human rights defenders in Sri Lanka.

As the High Commissioner a key role she had to play was to work towards the better protection of human rights defenders across the world. Her contribution in this area is widely acknowledged among many other far reaching  achievements.
.
During her farewell gethering last 21st of July, she went on to say that “I have been invited to deliver the Steve Biko commerative lecture on 12th September, as soon as I go back to my country. I’m going to say that we must be concerned about human rights defenders across the world who are subjected to repression, and not just ones in South Africa. Please share with me information about human rights defenders subjected to repression that I can share on that occasion”. (Steve Biko was a leading young actvist in the anti apartheid movement in South Africa. He was tortured and killed by white apartheid regime)

Navi Pillay is a hero of our times.

She was born to an ordinary family, was educated by her own efforts and spent her knowledge and time to end the apartheid regime. She belongs to the Mandela’s legacy, which fought fearlessly for human rights. At 26 years, she became a challenge to the apartheid regime, by becoming the first black lawyer from the Natal province. She later went on to serve as a Chairperson of the International Tribunal on the genocide in Rwanda which killed nearly a million people.

Although the position of the UN High Commissioner for Human Rights appeared to be an ornament for her, in reality she became a ornament to the UN Human Rights Council.

“This is a happy occasion, as this is a recorgnition for Africa. I accept this position knowing well what human rights violations are. I accept this position having long years of experience of human rights violations, without having any sight of justice. The anti-apartheid struggle has taught me me this” was what she had to say after her appointment in 2008.

That is part of the legacy she has left behind in the last five years. That no human rights violations should be tolerated, irrespective of the place and person(s) responsble.

During her term, the Human Rights Council paid uninterrupted attention to the human rights and civil rights situation of Sri Lanka.

The year that Navi Pillay was appointed as the UN High Commssioner for Human Rights was a year the repressive Sri Lankan government suffered an defeat at UN. It’s attempts to gain membership to the UN Human Rights Council failed, being defeated at a vote in New York by the UN General Assembly. This trend continued till 2014.

It’s unlikely that any government  has hurled abuses and blame at Navi Pillay on the scale Rajapakse regime had done. One other exception could be  the  organization called UN Watch, which  has constantly accused her of being biased in favor of Palestine and for her condemnation  Israel on many occasions.

Rajapakse regime has called Navi Pillay as a supporter of the LTTE and a cat’s paw of the West. It is clear that this is done with the intention of justifying the repressive controlof society by  the Rajapakse regime. The Sri Lanka regime has constantly hidden the fact that she has consistently held that the LTTE is also responsible for human rights absues from the begining.

This is what she had to say during the Special Session of the UN Human Rights Council in far back as May 2009: “There must be a proper investigation into the allegation that the LTTE had prevented civilians leaving the war zone. There are also reports that the LTTE has forcibly recruited persons, placed it’s weapons amongst civilians and thereby used people as human sheild. There are also allegations that that the LTTE had shot at persons fleeing the war zone and that there was a suicide bombing at a checkpoint where displaced persons were”.

“The government has annouced that amnesty will be granted to LTTE members except senior leaders. But I would like to emphasize that international law does not permit amnesty for those charged with war crimes, genocide, crimes against humanity and serious human rights violations”

Her consistent position about human rights in Sri Lanka has been that there has to be a proper investigation into allegations against both parties to the conflict.

She said in May 2009 that there is credible evidence that both sides are responsible for serious human rights violations and that an international investigation is the only solution. An important dimension of Navi Pillay’s approach was to bring to the attention of the UN the overall repression unleashed by the Rajapakses, in addition to abuses during the war. She left this mark in her one of her early interventions on the human rights situation in Sri Lanka as the UN High Commssioner for Human Rights, in May 2009.

History shows us today that her positions about post-war developments are correct.

Even Rajapaksa himself had to appoint international experts to his own commission probing last phase of the war.

Today, human rights is the the ghost that haunts the Rajapakses in Sri Lanka and abroad. Today, those who are turning to the UN Human Rights Council are not limited to trade unions, student movements, civil movements and political forces. Even prisoners who fear that they maybe shot dead are urging their families to tell the Geneva Human Rights Council.

For last five years, Navi Pillay was a tower of strengh in the democratic struggle for justice and accountability in  post-war killings and against on going repressive politics in Sri Lanka.

Let us wish her well in all her future endavors.

History will  be on the side of  justice and human rights, not repression and authoritarianism. .

(This is a slightly edited version of author’s column published in Sinhala language weekly, Ravaya  )