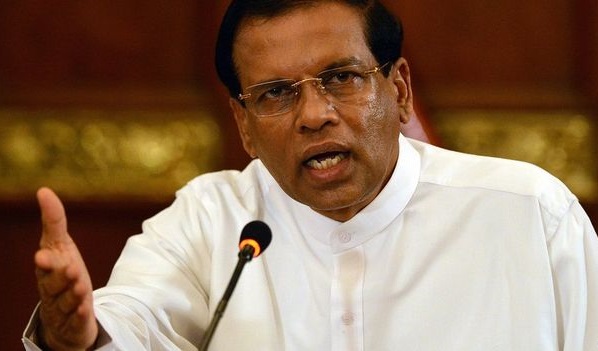 President Maithripala Sirisena addressing the Armed Forces, ‘Gallantry Awards 2016,’ last week said that certain media organisations, journalists, nongovernmental organizations (NGOs) and traitorous forces act without realizing the importance of ensuring national security. The President, who is constitutionally vested with the authority of Commander-in-Chief of the Sri Lankan security forces said he was not ready to compromise national security in order to please NGOs. A sore point for the security forces with regard to NGOs would be the demand for war-time accountability and for post-war demilitarization of the former war zones of the North and East. Some NGOs have been in the forefront of the UN-sponsored resolution that calls for an investigation into the past and for post-war demilitarization among others.

Earlier in the month the President came in for severe criticism from civil society groups including the one founded by the late Ven Maduluwave Sobitha who led the civil society campaign against the abuses of power of the previous government. This followed the President’s public criticism of state institutions investigating bribery and corruption. The Director General of the Commission to investigate bribery and corruption Dilrukshi Dias Wickramasinghe resigned following President Sirisena’s public criticism of three state investigative bodies for launching politically motivated probes. The President’s main complaint seemed to be that these investigations, in particular those involving the security forces, were taking place without his knowledge.

The President’s hard hitting and emotional criticisms of institutions that perform a check and balance function in the polity are a matter for concern.

They constitute a setback to the government’s commitment to their avowed policy of good governance, articulated especially at the elections that brought them to power. However, in both instances the President also engaged in more reassuring actions. He has met with the civil society groups that criticized him and promised reform. In the meantime Speaker Karu Jayasuriya was able to inform members of independent commissions that neither the President nor Prime Minister Ranil Wickremesinghe had negative attitudes towards any of the commissions. The Speaker also informed the commissions that the attitude of the President and the Prime Minister did not differ.

At the present time there is growing disenchantment among those who voted for change at the last presidential and general elections. However, it is important to keep the larger picture in perspective. During the period of the previous government basic freedoms were curbed. There was no freedom from fear and therefore no freedom of speech. There was impunity, symbolized by the white van that took away dissenters. There was a total breakdown of checks and balances epitomized in the ruthless sacking of the former Chief Justice by means of a kangaroo court of Parliamentarians.

It is important to note how much has changed for the better in the two years that have followed. Freedom from fear is absolutely necessary if the government is to be challenged as it ought to be by civil society and by institutions vested with the power to check and balance.

A major deficiency of the government is its lack of transparency. A part of the reason for this is that it is trying to resolve long lasting and deep seated problems such as the ethnic conflict. It is conducting negotiations with the Tamil and Muslim parties, who have confidence in it, but in secret as they fear that if the present positions they take are known to the general public they will create nationalist upheavals. Unfortunately what this means is that in today’s climate of freedom, all that is bad that the government is doing gets publicized, whilst the good it is doing gets hidden. The vain effort of the government to suppress the Central Bank bond scam has become known to the general public, much to its disappointment and anger.

The country is presently in a process of transition from a situation where war, authoritarian rule and corruption were uppermost to a situation where peace, reconciliation and good governance prevail. This process will not be a smooth or painless one. There are many vested interests at play. The government of national unity formed through an alliance of the UNP and SLFP bring together the new and old. Most of the government leaders today were leading members of governments of the past when war, authoritarian rule and corruption prevailed. Therefore, as in the case of the war-related accountability, there is reluctance to press ahead with investigating the past acts of corruption and bribery. It is notable that some prominent members of the opposition are keeping quiet on the controversies regarding bribery and corruption investigations.

The continuation of old practices with the new is to be seen most starkly today in the manner in which the investigation into the Central Bank bond scam is being conducted. The Committee on Public Enterprises (COPE) which is a parliamentary committee drawn from all parties found itself bitterly divided on the outcome on party lines. The Committee chairman Sunil Handunnetti of the JVP was even prevented from making a statement in Parliament on the way he was treated by other members of the committee whose views he did not share. The final report recommended penalties and other directives against Central Bank officials, including the former Governor, and Institutions responsible for the transactions and, to recover the losses incurred by the public and government. In addition, it emphasized that legal action be initiated against the persons and institutions responsible for the transactions.

So far the four pillars, or principles, of transitional justice that are being deployed in Sri Lanka are to ascertain what happened on the military battlefield. Transitional justice refers to the process that a country needs to go through if it is to make the transition from massive human rights violations to good governance and reconciliation. In the case of Sri Lanka, there has been a need for international pressure, as neither sections of the government, opposition, the armed forces or most of the people are keen to go into the past to investigate what happened in the war. They do not want to deal with the issues of truth, accountability, reparation or institutional reforms. The manner in which the investigations into matters of massive bribery and corruption are taking place, and the opposition to the truth coming out, and punishment being meted out, suggests the need for a similar emphasis on transitional justice to tackle this problem.

Chairman of the National Police Commission, Prof Siri Hettige, a most respected academic and public intellectual, has proposed the idea that the transitional justice process needs to be applied to issues outside of the narrow confines of war, and to governance issues in general. His view is but a reflection of the concern in the larger polity amongst who want a real change in the country, and are hoping against hope that the National Unity government headed by President Sirisena and Prime Wickremesinghe will deliver on its promise of good governance. But hope alone will not suffice. It is important that civil society and international pressure is brought to bear on the government to engage in a more broad based transitional justice process.