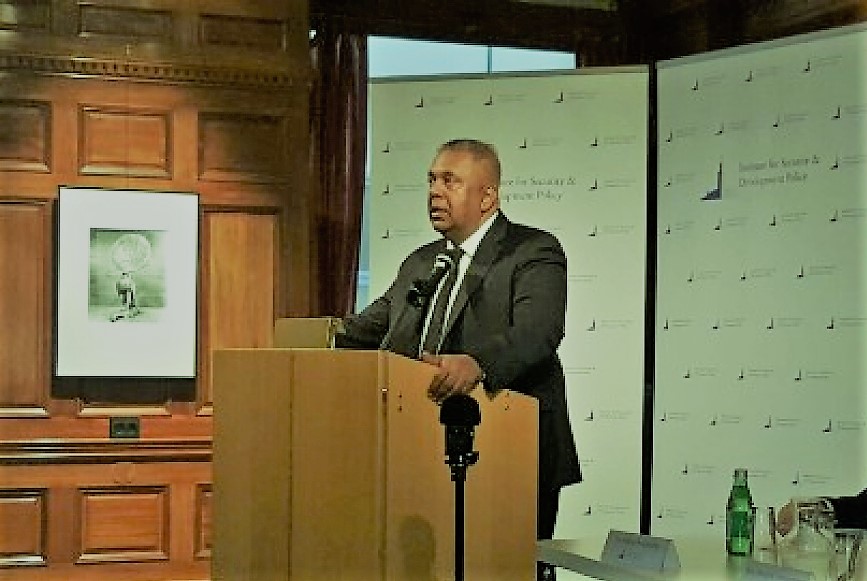 Minister of Foreign Affairs Mangala Samaraweera says that ” Today Sri Lanka has  a choice between impunity, conflict, corruption, extremism and poverty, or the rule of law, accountability, equality, multiculturalism, openness and trade. We have a choice between conflict and poverty, versus peace and prosperity.”

He has said that speaking at a  round table discussion at the Institute for Security and Development Policy, Stockholm on  on ‘Sri Lanka’s Peace and Reconciliation Process’  recently.

Excerpts from his address follows:

The Presidential elections in January 2015 followed by Parliamentary elections in August heralded a new beginning for Sri Lanka under the leadership of President Maithripala Sirisena and Prime Minister Ranil Wickremesinghe. The people of Sri Lanka came out in droves twice in one year to end authoritarianism, corruption and the politics of hate. In short, they voted for a new democratic Sri Lanka where democracy, reconciliation, the rule of law and sustainable development would flourish.

Having achieved a significant number of promises set out in the 100 Day Work Programme of the Government, the most significant being the repeal of the 18th Amendment to the Constitution, and the adoption of the 19th Amendment, fresh Parliamentary elections were called in August 2015.

The 19th Amendment, as most of you I am sure are aware,

–    Re-introduced the two-term limit of the Presidency,

–    Recognised the Right to Information as a fundamental right, and

–    Recognised the Promotion of National Reconciliation and Integration as duties of the President.

The Government also had in its hands, the task of restoring Sri Lanka’s relations with the outside world, and restoring lost credibility.

The power of Parliament has been strengthened. Oversight Committees have been set up with Opposition members chairing several key Committees.

The Right to Information Act, which was enacted by Parliament last year and is now in the process of being operationalised.

In two years, Sri Lanka has made considerable strides from soft-authoritarianism towards consolidating a rights-based democracy with deeply entrenched institutions and values.

We are convinced and we recognize clearly, that societies that avoid looking at the past, fail to build sustainable peace. Sri Lanka has suffered conflict several times, both in the South and in the North.

It is these realisations that cry out to us that our nation will never be able to achieve the full socio-economic development potential that our nation can reach, and our citizens are so deserving of, if we fail to address grievances, that risk plunging our nation into conflict once again, that led us to co-sponsor the Resolution that we worked on with members of the Human Rights Council in October 2015.

As the President said in his Independence Day speech in February last year, Sri Lanka is committed to the implementation of that resolution so that we as a country can deal with the past honestly and truthfully, accept that past, put it behind us, and then move forward to build our Sri Lankan nation anew.

The set of actions that the Government has identified to deal with the past in a comprehensive manner, addressing the grievances of all victims, include truth seeking, justice, reparation and measures for guaranteeing non-recurrence. As a first step, we have enacted legislation to set up an Office on Missing Persons. Now that the Consultation Task Force set up to seek the views of the public has just handed over its Report to the Government on the 3rd of January, the relevant experts of Government, in an exercise coordinated by the Secretariat that has been set up to Coordinate the Reconciliation Mechanisms will be studying the Report and finalizing the designing of a Truth-Seeking Commission and a Reparations Office.

As you are aware, one of the first steps taken by the National Unity Government in January 2015 itself was to restore civilian administration in the North and the East of the country. We have also taken a series of symbolic steps to establish equality of all citizens, such as singing the National Anthem in both Sinhala and Tamil; promising the people to ensure that we don’t allow our country to plunge into conflict and the shedding of blood of our citizens by adopting a Declaration of Peace on Independence Day in February 2015.

As an important measure to prevent non-recurrence of conflict, the Parliament, last year, unanimously adopted a Resolution for the Parliament to sit as a Constitutional Assembly to draft a new Constitution that would, among other provisions.

Much of the preparatory work for the new constitution has now been completed. Wide-ranging public consultations were conducted for the first time in Sri Lanka’s constitutional history; much study, reflection and negotiation was undertaken to arrive at consensus at the six sub-committees  set up and final negotiations on a draft are currently underway.

Above all, Sri Lanka’s need of the hour is breaking through the greatest obstacle that has held Sri Lanka back since Independence – our failure to accept and celebrate our diversity as a multi ethnic, multi-cultural and multi lingual society.

But for Sri Lanka’s democratic and reconciliation journey to succeed, its economy must flourish and its people must prosper. The peace dividend must reach all segments of our society in the form of economic benefits, better standards of living and more job opportunities for our youth. It is in this respect, our government is committed to make Sri Lanka one of the most advanced trade and economic hubs in the Indian Ocean.

We are tremendously encouraged that the EU Commission, in recognition of our commitment to sustainable development, good governance and human rights and the progress being made, has recommended Sri Lanka’s GSP Plus application to the European Union Parliament and the Council just a few days ago.

The government’s plan of making Sri Lanka an Indian Ocean hub are beginning to bear fruit; The Colombo international financial city; The Hambanthota, Colombo East and Trincomalee ports; and the Katunayake and Palali airports are all hives of activity. Then by 2020, Sri Lanka will have the necessary infrastructure, regulations, and companies in place to achieve its hub ambitions.

Our history tells us that Sri Lanka was the marvel of the ancient world when she embraced multiculturalism, openness and trade. Anuradhapura and Polonnaruwa, at their heights, were home to people of all races and creeds. A spirit of celebrating diversity prevailed, and our civilization was enriched with ideas and practices from Rome, Persia, Egypt, Greece, India, South East Asia and China. We were a connected civilization proud of our position at the centre of Indian Ocean trade.

As Sri Lanka stands at the crossroads of change, now more than ever, it needs the support and friendship of the international community. In fact, I would like to specially mention that Foreign Minister Margo Wallström has remained a steadfast friend. Even though our two countries may be in two different corners of the world, our shared values of social democracy bind us together, and Sweden remains an inspiration for Sri Lanka in our journey forward.