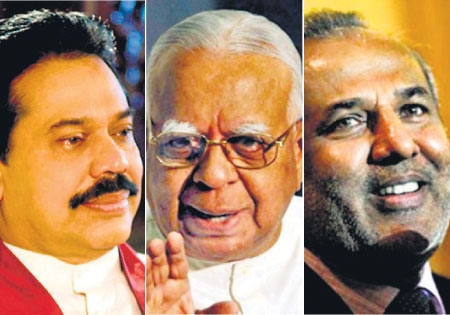 The Tamil National Alliance (TNA) yesterday expressed confidence that SLMC leader Rauff Hakeem would abide by the wishes of the Muslim people, who supported the party without opting to vote for the government.

“As a politician, I will be very patient until the SLMC leader makes up his mind and inform me of his decision”, TNA Parliamentary Group leader, R. Sampanthan said.

“We have agreed to offer the Chief Ministership to the SLMC and all other matters could be resolved through discussions”, he told a news conference in Colombo.

From the views of the Muslim community, it can be gathered that they are eager to see the SLMC join hands with the TNA to form the council, he said. “This is a unique opportunity for the Tamil speaking at this crucial point of time. We hope the SLMC leader abides by the wishes of his people”.

Asked by journalists whether he would be willing to join a Provincial National Government in the Eastern Province, the TNA leader replied, “How can Ministers Susil Premajayath, Keheliya Rambukwella and Dulles Alahapperuma to ask the TNA to come forward to accept any such proposal. Who are they to tell us”.”I would consider such a proposal if President Mahinda Rajapaksa asks me to come forward in the national interest as it is my wish that whilst the interests of the Tamil, Muslim people are protected, we should ensure the rights of the Sinhalese in the Eastern province are not affected”, he noted.

Asked whether the TNA would be willing to accept an offer of the Chief Ministership if it was offered by the government, Sampanthan shot back “Neither the TNA nor any of its members could be swayed to change our stand by offers of positions or privileges from any quarter”.

He asserted that the five elected TNA members have had visits from persons claiming to be from the military intelligence offering them houses in Colombo, luxury motor vehicles worth not millions but multi millions of rupees, government contracts or anything they wanted to cross over to the government.

These members have been given the mobile telephone numbers of their visitors to respond to their offer. If they wanted, they could have got anything under the sun, but they refused to support the government against their conscience, the TNA chief said.

When referred to Minister Nimal Siripala de Silva telling visiting US Assistant Secretary for South and Central Asia Robert O’ Blake that the TNA was the obstacle as it refused to participate in the PSC, Sampanthan showed an official copy of the statement made by Blake where he had called upon the government without delay to hold elections to the Northern Provincial Council and resume talks between the Government and the TNA which were stalled in January this year.

“We want the President to first implement what was agreed between us. Then we will be willing to sit in the PSC and discuss the other matter towards resolving the national question”, he noted.

“We feel the 17th amendment to the Constitution and the consequent annulment of the provisions pertaining to an independent Elections, Police and Public Service Commissions ensured that the ruling party is able to have its own way at elections”.