The ongoing strike by university staff and the Government’s continuing lack of initiative to resolve the crisis has left students confused, frustrated and angry.

Science student Yomal Jayasinghe’s dream of qualifying and getting a decent job becomes less achievable by the day as universities remain shut and academics continue to agitate for salary and other reforms.

The 24-year-old student from Hambantota said he did not even have a place to stay, as the hostels were also closed.

“I am staying in a temple because I haven’t a place to go to,” Mr. Jayasinghe told the Sunday Times. “We were in the hostel having lunch when campus officials burst in and ordered us to leave immediately.
My parents are not rich. They are depending on my getting a good job after I graduate, but how can I get a good job if I am cannot complete my degree?”
Ruvini Senaratne, a student of the Faculty of Arts at the Colombo University, said the past three months have been an “utter waste of time”, with campuses shut down. “I am in my second year and we were to complete the year’s curriculum last month. We have not been able to take any exams.
We worked so hard to get a place in university.
“They say the universities have reopened, but we can’t even enter the library to do any reference work. This is pathetic. And no one seems to be doing anything to resolve the issues. The authorities simply have no idea what the students are going through and what’s going on with the lecturers. I have started following a private study course, so as not to waste time. This situation is so unfair to students who can’t afford to spend on private study courses.”

Law student Awantha Nagahamutha comes from Galle and was a hostel student at the Colombo University. “The universities closed in the middle of our exams. I have done two subjects, with one more to go. Because the hostels are closed, outstation students like me have to do part-time jobs and follow part-time study courses,” he said.
Third-year law student Lakmali Hemachandra complained that all the other universities have opened except the Colombo campus.
“The authorities are politicising the lecturers’ demands. The Government should be responding to our problems. Arrogance and ignorance will not settle issues. I am completely confused. “I was in the middle of my exams when the campus closed.
And now I can’t even enter the library to study. To let this situation drag on for so long is utterly unfair,” Ms. Hemachandra said, adding that all state universities should be “depoliticized, and the vice-chancellors should be more considerate of the students.”
Arts student Susantha Rohana said the students were closely watching the situation. “The universities and hostels have been closed to prevent action by student unions and to stop students from organising protests. I come from a rural area in Moneragala. I have no place to go. It is hard to find decent accommodation. I have paid all my hostels fees.”
The Sunday Times learns that some university students are applying for places in foreign universities.
Arbitration is for labourers – not university academics, says union group
Professors and lecturers will continue their strike until the Government comes up with an acceptable strategy to resolve the deadlock at universities around the country, Federation of University Teachers’ Association (FUTA) General Secretary Dr. Terrance Madujith told the Sunday Times.

FUTA representatives had discussions with the Commissioner General of Labour early this week. The Government has called for arbitration to resolve the issues, but the FUTA insists on direct engagement with the authorities.
Last month FUTA members had three meetings with labour officials and also met the Minister of Labour, Gamini Lokuge.
The Commissioner General of Labour views the ongoing university strike as an industrial dispute between FUTA and the University Grants Commission (UGC), and therefore should be resolved in a process of arbitration. The FUTA was asked to nominate an arbitrator on their behalf. 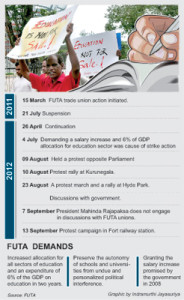 “We do not see this as an industrial dispute,” Dr. Madujith told the Sunday Times. “We are academics, not labourers. Only labourers submit to arbitration. FUTA vehemently opposes the idea of arbitration. We have very broad demands of national importance.”
Following the discussions with the Labour Commission, FUTA’s executive committee held a meeting at the Open University.

“At the executive committee meeting, the FUTA unanimously decided not to engage with any arbitration committee. We see our demands as being of the utmost importance, and we insist on negotiating with the government,” Dr. Madujith added.
The FUTA has set up a fund to help academics who need financial aid while the university deadlock continues.
“The fund was launched for members who need financial assistance. We plan to give loans to the most needy lecturers. But the fund has to be formalised first. The Government is already making false allegations about FUTA going around collecting dollars. We have to formalise everything and make everything transparent.”
The FUTA plans to hold a rally in Colombo on Sunday 28 to demonstrate solidarity with the other trade unions. There will also be a protest march from Kandy and Galle on Monday the 24th. The FUTA is collecting signatures for a petition to support its main demands. The target is one million signatures.