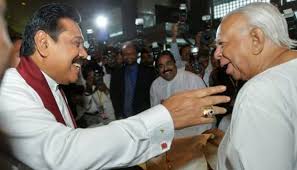 In his tribute to Prime Minister, Mahinda Rajapaksa on completion of fifty years in politics, the leader of the Tamil National Alliance R. Smnpanthan has wished him an ever more successful political future.

TRIBUTE TO HON. MAHINDA RAJAPAKSA ON COMPLETION OF

I am extremely glad to pay tribute and extend my warm greetings to Hon. Mahinda Rajapaksa on the completion of the fiftieth (50) year of his political career – During this period he has served Sri Lanka in every possible capacity as a politician, as a Member of Parliament, as a Minister, as the Leader of the Opposition, as the Prime Minister and as the President of the Country. He distinguished himself in every one these positions that he held and has earned for himself the affection and confidence of the people of the country. He was essentially a Leader of the ordinary people who trusted him and who were willing to be guided by him.

He was essentially a Man of the People in whatever position he held. The People respected him and he in turn respected the People. He was a great source of strength to the people and the people in turn were the source of his immense strength. This is perhaps the strongest quality of any Political Leader and Hon. Mahinda Rajapaksa enjoyed this quality in abundant measure. This was the key to his political success, and this must be acknowledged.

On behalf of the people of Sri Lanka, particularly the Tamil people whom I represented in Parliament I extend to him our warmest greetings and best wishes for an ever more successful political future.

Sri Lanka as a Country faces serious unresolved problems. The country direly needs a new Constitution the supreme Law of the country. The people in Sri Lanka have in their national democratic verdicts over the past several decades, mandated the formulation of a new constitution incorporating changes that has been in contemplation for a long period of time, and around which there is substantial consensus.

A strong Leader with the support of the people is required to fulfil this urgent and compulsory need. Hon. Mahinda Rajapaksa is undoubtedly in that position. Hon. Mahinda Rajapaksa should rise to greater heights by undertaking and accomplishing that task. This should raise him to the level of a Statesman and give him not merely national but international recognition and stature. He can be assured of our fullest support in this matter.

He would earn for himself a niche in Sri Lankan history as the Leader who brought about genuine and permanent peace in Sri Lanka on the basis of justice, equality and dignity.

With my warmest best wishes to Hon. Mahinda Rajapaksa and family.