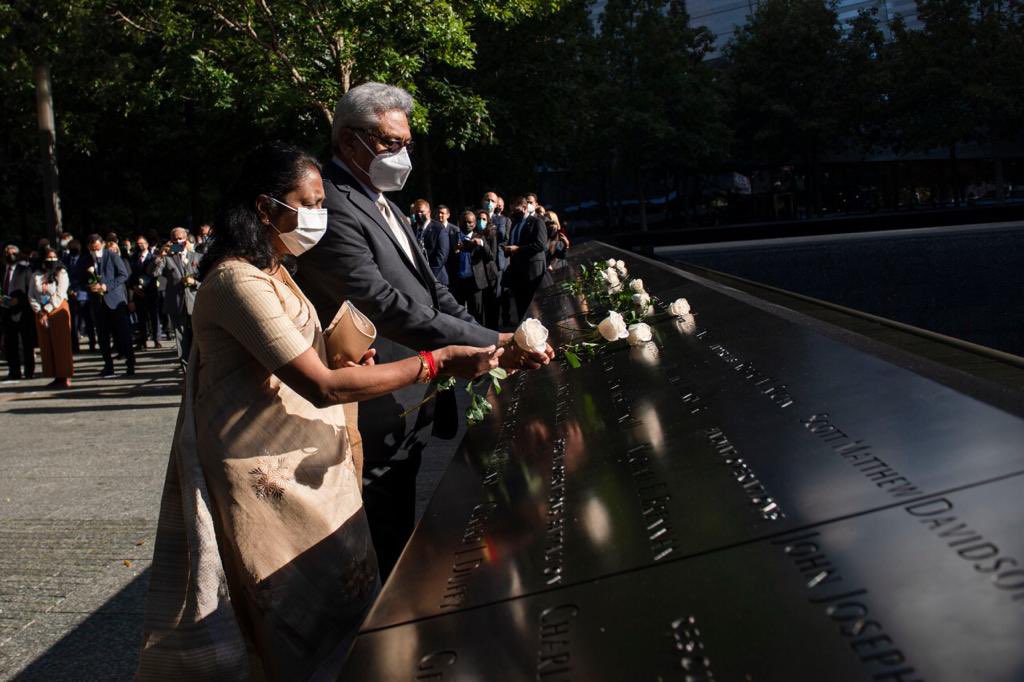 Image: President Rajapaksa and his wife paying tribute to the lives lost in the 9/11 terrorist attacks in Washington and New York.

Recently on the occasion of the 72nd Anniversary of the Sri Lanka Army, the President presented several important points that affect the survival and future of the country. We, who call for a just society and a democratic country have considered and analyzed these ideas carefully since. We studied his speech in depth. If the things mentioned in it are fulfilled, we believe that he will be able to take the country forward and earn the respect of our society by fulfilling the wishes of the people even if delayed.

The vast majority of the country’s population today does not accept the current Constitution based on the executive presidency.

On a previous occasion, our organisation presented the President with 15 important proposals prepared by our think tank. We urge the authorities to reconsider their position on these proposals.

It is commendable that the President has admitted that there have been shortcomings in the last two years. During his recent meeting with the UN Secretary-General, the President has assured he would not only establish democracy but would also protect human rights in our country. Now it is his job to fulfil those promises.

The President has also stated that a new Constitution and a new electoral system will be introduced to the country within the next year. It is a very important and crucial announcement that will have a profound effect on this country. It is also commendable that he finally understands how democracy in the country has been destroyed by the adoption of the 20th Amendment to the Constitution, which further strengthened the executive presidency.

The vast majority of the country’s population today does not accept the current Constitution based on the executive presidency. Therefore, it is for the benefit of the country that the President also now understands the need for a new Constitution. The nature of this country, that is, its sovereignty, the nature of the sovereignty of the people, social freedoms and rights as well as the independence of the judiciary, is determined by the Constitution.

Legislature should be strengthened

The National Movement for Social Justice has continuously advocated the need for a new Constitution. Our primary position is that the country’s legislature should be strengthened. Therefore, we too stand for the need to draft a new Constitution in line with our basic tenets. There are also a few key points that we as an organisation would like to emphasize here.

Our country does not have a satisfactory history when it comes to the subject of Constitutional Reform. The Constitution is the supreme law of the land as well as the fundamental law. It is also the agreement reached with the citizens with regard to public administration. Therefore, any Constitutional reform and drafting should take place for the common good of the citizen ensuring the country’s stability. It must be done with honest intentions and with due respect, without any ulterior motives.

Also, the President has once again stated that the “One Country, One Law” policy will be implemented in Sri Lanka. However, at present, there appears to be no such policy in the country.

At the same time, those who lead these reforms and drafting of the new Constitution must have a high level of knowledge on legislation and constitutional traditions. Certainly, the policies and traditions that should be safeguarded in the process of Constitutional Reforms must be protected. It should also be drafted with the active participation of the country’s citizens. At the same time, care must be taken not to repeat any of the wrongs done in this country’s past.

The new Constitution drafted must be passed, subject to the approval of the Supreme Court, as to whether it conforms to the principles established. We believe in a new Constitution and it will only be good for this country if it is implemented in accordance with such a process.

Also, the President has once again stated that the “One Country, One Law” policy will be implemented in Sri Lanka. However, at present, there appears to be no such policy in the country.

Those who destroyed King Buwanekabahu’s royal court are now at large while still holding responsible positions in this country. Even those who have been sentenced to death by the Courts for serious crimes have been pardoned by the President. Ministers are even able to forcefully enter prisons and issue death threats to inmates. These are serious incidents.

The first thing to be done is to set an example to the country by enforcing the law in relation to such incidents and we request the authorities to do so. In a situation where death row inmates are being pardoned, we are of the opinion that it would be most unjust to allow the entire future of a popular artist like Ranjan Ramanayake to be ruined. Justice should be delivered to Ranjan Ramanayake at least now. As a result of these incidents, we can observe that the government is following two policies instead of one.

At the same time, there are serious doubts as to how the law is being enforced in relation to the Easter Sunday attack. It is a very dangerous situation. That suspicion will remain until all those who directed and supported the attack are punished.

Even the Catholic Church in this country has raised its doubts about the processes in relation to the Easter attack. Therefore, we also request the government to fully disclose the report of the Presidential Commission appointed to look into the Easter Sunday attack which we believe will help to dispel any doubts. Do not let this issue continue further.

We also feel that holding on to the Upali Abeyratne Commission report, which gave malicious decisions that ridicules the judiciary and the country, is a disgrace.

These days, there is also talk in political circles of holding provincial council and local government elections. But prior to that, the election commission and other commissions must be freed from the rampant politicisation. It is also alleged that a plan is being discussed to distribute state resources to the advantage of the ruling party during the election period.

According to the reports we have received so far, it seems that there has been a major collapse in the country’s agriculture sector. If immediate action is not taken in this regard, a famine could occur in the country in the future.

Allegations are levelled regarding an attempt to hand over the national wealth of the country in the name of rural development to political activists who are not representatives of the people. This should not be allowed. The whole country must stand up against it. Also, the higher authorities should intervene in this matter and prevent it.

According to the reports we have received so far, it seems that there has been a major collapse in the country’s agriculture sector. If immediate action is not taken in this regard, a famine could occur in the country in the future. Although the use of organic fertiliser is a very valuable decision, no country in the world has done it immediately and successfully. Experts in the field are of the opinion that it should be done according to a five-year plan.

The government should keep in mind that the prices of essential commodities such as flour, sugar, gas and cement severely affects the masses. If immediate steps are not taken to strengthen the country’s economy, improve the living standards of the people and reduce the cost of living, mass protests may take place in the country.

The innocent people of our country often hand over power and appoint rulers with the hope they will work for their welfare. Instead, whenever the government tries to oppress the people by plundering the national wealth of the country, the people who put them in power will eventually rise up against it. This is a universal reality. The fate of the rulers who do not understand this is often unfortunate. Therefore, the rulers of this country need to understand this at least now.

We are pleased that Sri Lanka has made great strides with regard to controlling the Covid-19 pandemic as well as its inoculation drive. We would like to express our gratitude and pay our respect to all those who have dedicated themselves to this cause.

We hope that the views and suggestions that we have put forward with good intentions will be brought to the attention of the President and the government.