The Swiss Federal Court rules that LTTE is not a criminal organisation & acquits 12 Tamils. 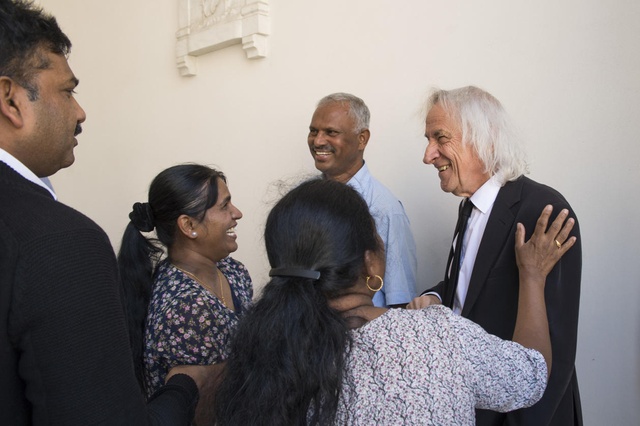 Image:Lawyer Marcel Bosonet (in tie) surrounded by supporters of the accused at the Federal Criminal Court in June 2018. (© Ti-press)

The Swiss Federal Court has ruled that the Tamil Tigers are not a criminal organisation and has acquitted 12 people of charges filed by the Office of the Attorney General (OAG).

In its indictment, the OAG had accused the people of violating the Swiss Penal Code by raising funds for the Liberation Tigers of Tamil Elam (LTTE) between 1999 and 2009. After its nine-year investigation, the OAG suspected the accused of financially supporting the World Tamil Coordinating Committee (WTCC).

But in June 2018 the Federal Criminal Court found that the hierarchical link between the LTTE and WTCC could not be sufficiently established. The judges also felt there was not enough proof to consider the LTTE a criminal group.

In April the OAG appealed against the verdict, insisting that the accused had supported a criminal group.

In a decision published on Tuesday the Federal Court upheld the previous ruling, noting that Article 260 in the Swiss Penal Code was designed to combat organised crime of a mafia nature. Since then it has also been applied to terrorist groups such as al-Qaeda or the Islamic State (IS) terrorist militia. The LTTE was not regarded as a criminal organisation at the time of the fundraising, stated the Federal Court.

According to the court, those who procured money for the LTTE in Switzerland at that time could not assume that they would later violate the law. Even if it had carried out terrorist attacks, the LTTE’s primary objective was to be recognised as an independent ethnic community.

Around 50,000 people from Sri Lanka live in Switzerland, mostly ethnic Tamils who fled the island’s 30-year civil war that ended in 2009.