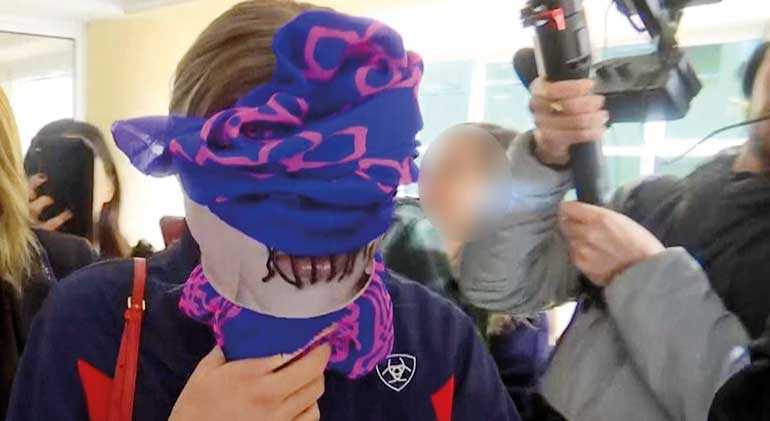 On 25 November 2019, Gania Banister Francis, a Tamil employee of the Swiss Embassy (aged 38) alleged that she was kidnapped by the Sri Lankan Police. She has said she was treated brutally and subjected to coercion and sexual harassment. She added that the Police asked her for sensitive information on political asylum cases, before releasing her.

Subsequently, according to news reports, she was taken in for questioning despite medical conditions, questioned for 30 hours once and overall over five days, disregarding protests from the Swiss Embassy.

Francis’ counsel, Upul Kumarapperuma, complained to Court that he himself has been targeted by individuals and media for appearing in this case, adding that certain false information about Francis has been released, discrediting her.

He told Court that her employer, the Swiss Embassy, has also been targeted and misinformation about the Embassy and its other employees is being spread to change the narrative of the story and to discredit Francis. The Police seemed in a hurry to nail her and diminish her credibility so much so that they had her warded in a psychiatric hospital.

Many news reports connect this harassment to a Sri Lankan Police investigator, Nishantha Silva, who fled to Switzerland following the 16 November election in which President Gotabaya Rajapaksa had been partly the focus by Silva.

Francis awaits trial, she is forbidden by Court from leaving Sri Lanka. Reports suggest that her aged mother has fled Sri Lanka in fear to Switzerland via Singapore.

In striking parallel, in Cyprus, an as yet unnamed 19-year old British tourist reported to Police that on 17 July 2019 she was assaulted in her hotel room by Israeli youths aged 15 to 12. There is medical evidence of bruises and scratches on her. The youths were remanded the next day.

On finding no DNA evidence (as the Police claimed), the five were released to run away immediately to Israel, and the girl was called into the Police station on 27 July 2019, and accused of lying and, as she claims, forced to give another statement for over eight hours without access to a lawyer. She signed a retraction and is formally charged at the odd hour of 2:30 a.m. with “giving a false statement over an imaginary offence”.

The woman was remanded in custody for eight days, after being escorted into Court in handcuffs. She faced charges of “public mischief” for alleging she had been sexually assaulted by the tourists. She rejects her retraction statement saying she was forced to sign it by the Police. Her trial began on 15 October, as human rights and feminist activists pressed the Cypriot Attorney General to dismiss the case.

The final judgement delivered on 30 December is that she is guilty as charged, and in the meantime, she is awaiting sentencing, out on bail and forbidden from leaving Cyprus. The legal aid group Justice Abroad said the trial had been far from fair because the judge had refused to consider whether the defendant had actually been assaulted as revealed by the marks on her body.

One cannot be amazed by the parallels as I was in the war years when victims of torture here had testimonies very similar to what others reported from the Shah’s Iran and under dictatorships in Latin America – toe and finger nails being pulled out, needles pushed under nails, beatings, special injection of drugs making men ejaculate, being hung upside down with a bag over the eyes putting out petrol fumes or chili fumes. There seemed a good trade in torture technology between friendly autocrats.

The prosecuting teams also bear striking similarities in getting female victims of the sexist police to withdraw their statements, long interrogation over the night without legal representation, etc.

How do we judge? Where does the truth lie?

The Judiciary? No, going by our former Chief Justice’s boasts on how he had rendered a judgement favouring a party in the Hambantota pilfering case while the other two judges meekly signed “I agree”. A Supreme Court justice haranguing a murdered 12-year-old LTTE conscript undergoing rehabilitation at Bindunuwewa, points to our judges also being cut from the same cloth as all of us. I desist saying more because of the actions against Francis.

The legal fraternity? No, when all lawyers attending the relevant Bar Association meeting including Tamils elders like Nilakandan unanimously condemned the UN report on the massacre of 40,000 on the beaches of Mullaitivu, even before the report was issued. We live in fear and will easily say things we do not believe in.

In newspapers? No, going by the absence of any objective reporting while Tamils were at the receiving end. The change in editorial tenor in the last few weeks will also give us the answer. Even in this Francis case, reporters who seem to know what happened, are reluctant to say anything except that they think that the incident as alleged by Francis did really happen.

Eye witnesses will say anything in Sri Lanka driven by communal passion or to suck up to authority.

For example, on 27 December 2019 at 10:30 p.m. or so I was driving from Jaffna to Colombo with my wife. Branching off A9 at Rambewa and entering Anuradhapura by A20, I came to a T-junction at the end of A20. I turned left when an immature driver overtook me on my left while turning left herself. Being off the single lane she moved right to my lane and bumped into me on my left and her right. I stopped.

The husband on the passenger side came around, was angry, opened the passenger door by which my wife was seated and became abusive in the Sinhalese language. He accused me of overtaking him and hitting him from behind. I was very fearful. It was Anuradhapura. We are experienced with mobs. A crowd was gathering.

I took off but the husband and another car gave chase. I drove to the Police station. There a crowd came in and became so abusive in Sinhalese that the Policeman there shouted at them to go out and do their shouting. I told the officer what had happened (translated into Sinhalese by my wife), and the other driver wearing a necklace with a gold cross stuck to their version. There were eight people backing their story. There was talk by them of my van being impounded (which would have left me stuck at midnight in Anuradhapura with my wife and dog which a hired car to get to Colombo may not accommodate).

As these fearful thoughts raced through my mind, the Policeman, one Wickramasinghe who perhaps was the OIC, turned out to be decent. He called for the CCTV camera footage at the junction. After viewing it, he privately told the other party something and they quietly vanished. She was not charged, just like the monk assaulting a Christian priest described below was not charged.

He asked us to tarry awhile as he said that the other party was very angry and that we should leave straight for Colombo. It was a rare Sunday I missed the Eucharist but made up for it only in part with a wedding service at the Cinnamon Gardens Baptist Church where my daughter was a bridesmaid.

Who respects our Police to expect justice through them? I do not, even though the Anuradhapura Policeman was in his own way not out to get us as the mob was.

Many times have I seen my drivers getting away with Rs. 300 after being stopped for speeding, especially North of Vavuniya on the A9. Writer Lakmal Harischandra has documented with video evidence, Ampitiye Sumana, a Buddhist monk, slapping a Christian minister in front of a Policeman. The monk is free to go about creating his mischief. No criminal charge for that in this country.

Look at the CID. They declared Dr. Siyabdeen Mohamed Shafi, who was attached to the Kurunegala Hospital, not guilty of anything after high-ranking persons accused him of tying up the tubes of Sinhalese women without their knowledge. Some of the women who accused him of tying up their tubes, said the CID, subsequently became pregnant. The poor Dr. Shafi suffered badly. The witnesses had behaved like my Anuradhapura mob.

Now suddenly, after the change of Government, he is guilty and they are reopening investigations. I guess it is no problem for the CID to deal with their previous testimony sworn to in Court. They do not seem to care even if it is obvious to all that they are on a vindictive streak, having lost their humanity and lost sight of justice. Such a legal system can only be called a joke.

Look at the case of Champika Ranawaka. The CID cleared him some years back and now they are going after the man again. Perhaps the CID was politically actuated then or perhaps they are so actuated now. We do not know. But either way, it shows that our CID cannot be trusted.

The murdered ruggerite Wasim Thajudeen’s case and the indicted Judicial Medical Officer Ananda Samarasekara’s behaviour are other instances that will have lessons for us as time flows. They can play with murder charges because they have not been framed yet. But if the Attorney General decides there is no case against Samarasekara after indicting him, it would open questions about the Attorney General’s credibility and constancy of opinions when the Government changes.

A team of respectable investigators have investigated the last days of the war for the UN and solemnly declared in their report that upwards of 40,000 persons were massacred by the LTTE and the Government.

Our Government – we have only one Government, not a Gotabaya Rajapaksa Government or a Maithripala Sirisena Government – agreed to many things including trials under resolution 30/1 at the Human Rights Council.

There is talk now of renegotiating the agreement which we ourselves cosponsored. That attempt at withdrawing from our solemn agreement – indeed that attempt to cheat the world – is telling on our truthfulness and integrity.

Trying to renegotiate the agreement would be a disaster for our reputation as a truthful nation. So doing would make anyone wonder why we do not push ahead with war crimes trials and leave it all behind us if no one is guilty.

Surely, the move to renegotiate is pushed by those who do not want to face a trial. If there is no guilt, there is no need to fear a fair trial watched by us and the international community to ensure fairness. The international presence is essential if war crimes trials are not to go the route of the cases cited above where the Police clear the guilty.

(Note: This article has been written carefully and thoughtfully in an attempt to preserve the endangered Sri Lanka that I know and love so much. I hope that for doing that, I will not be charged with ‘Fabricating False Evidence and Inciting Disaffection against the State,’ like Francis has been, or with causing “public mischief” as in Cyprus.)