The resolution, its follow up actions interim update in September and a comprehensive report in March 2014, is a strong signal that the international community intends to remain seized with the situation in Sri Lanka 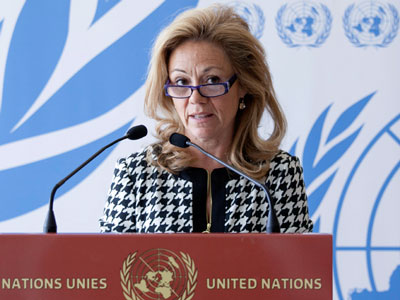 I’d like to open with a few general remarks about the current session and then turn to the important resolution on Sri Lanka that just passed.

This session, which draws to a close tomorrow, has been one of the most significant in the Council’s short history.   The packed agenda and vast portfolio of country situations and human rights issues that we have dealt with in this session serve as clear evidence of the dramatic improvement in the Council’s functioning and in its ability to serve as the lead entity in the UN for promoting and protecting human rights.

In addition to the formal work of Council members in the chamber behind us, I will note that more than 150 different parallel events sponsored by NGOs, civil society and governments have taken place.  These activities signal that human rights defenders and civil society do consider now the Human Rights Council as an essential platform and venue for their work and for ensuring that international attention and focus remains on important human rights issues.
……………..
………………

Let me come now to the resolution that was just adopted by the Council overwhelmingly on the subject of the human rights situation, reconciliation and accountability in Sri Lanka.

Today, in effect, the international community came together to call upon the government of Sri Lanka to fulfill its stated obligation to its own people to take concrete steps to move forward to address outstanding issues related to truth and reconciliation, and by meeting its obligation on accountability.

The resolution relied upon the detailed report of the High Commissioner Navi Pillay, which made clear that Sri Lanka must take meaningful action on reconciliation and accountability, including the establishment of a truth-seeking mechanism as an integral part of transitional justice.  The resolution passed today also addresses the growing concerns over the deteriorating human rights situation in Sri Lanka, including reports of forced disappearances, extrajudicial killings, as well as intimidations and reprisals against human rights defenders.
Over the past year the United States and many others have expressed strong concern over the lack of process on these vital issues as well as backsliding on respect for human rights and the rule of law.

The United States, along with 40 co-sponsors, put forward this resolution in a spirit of friendship toward the people of Sri Lanka, but also out of genuine concern about the lack of follow-through on the promises by the government of Sri Lanka to carry out a credible form of domestic accountability.  We are concerned about some worrying signs of back sliding with respect to the rule of law and protection of human rights in the current situation as well.

The United States stands ready to assist Sri Lanka as it makes necessary progress on these longstanding issues of reconciliation and accountability.  The Office of the High Commissioner, as well as the Special Procedures, are also standing by ready to assist the government of Sri Lanka with technical assistance and capacity building so that they can move forward toward a sustainable peace and reconciliation, based on truth and accountability.

The resolution, which includes specific follow up actions including an interim update by the High Commissioner in September and a comprehensive report in March 2014 by the Office of the High Commissioner, is a strong signal that the international community intends to remain seized with the situation in Sri Lanka.