The pardoning sergeant Sunil Ratnayake is a step towards consolidating an elected military dictatorship in Sri Lanka. – ACPR 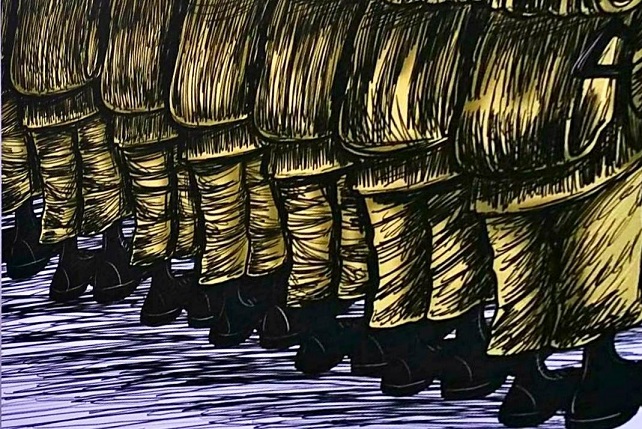 Condemning the pardoning former army Sergeant Sunil Rathnayake by president Rajapaksa, the Adayaalam Centre for Policy Research says that   “the pardon of Ratnayake in the context of  highly militarised environment combined with the unconditional respect and admiration that the military enjoys from the majority Sinhala Buddhist community in Sri Lanka is simply President Rajapaksa consolidating an elected military dictatorship in Sri Lanka.”

The Adayaalam Centre for Policy Research condemns the decision of Sri Lankan President Gotabaya Rajapaksa to grant a presidential pardon to Staff Sergeant Sunil Ratnayake. Ratnayake was convicted for killing eight unarmed Tamil civilians including three children on the 19th of December 2000 in Mirusuvil, Jaffna. As described by the Supreme Court when they confirmed his conviction in 2019, he and others killed these individuals by slitting their throats. The conviction of Ratnayake was a rare exception to the rule of impunity for crimes committed by State forces in Sri Lanka and his pardon is a reminder that even those rare exceptions are not permitted by the ethnocratic state. The route to justice must be an international process.

At the time of the massacre, Ratnayake was a member of the reconnaissance unit attached to the Gajaba regiment of the Sri Lankan Armed Forces. Both President Gotabaya Rajapaksa and the Defence Secretary Kamal Gunaratne were initial members of the Gajaba regiment. Reconnaissance units of the Sri Lankan Army were well known for their atrocities and the Mirusuvil massacre was a textbook example.

The prosecution of Sunil Ratnayake managed to miraculously wade through the many pitfalls of the system of administration of justice in Sri Lanka including: a) the political unwillingness of successive Governments of Sri Lanka to prosecute soldiers for crimes committed against the Tamil people; b) the lack of independence of the Attorney General’s Department; and c) the lack of willingness to investigate crimes against Tamil civilians by the police. Many other cases failed because of the combination of these factors including the Kumarapuram massacre, the Visvamadu gang rape case, the Trinco Five massacre and many others where there was no prosecution even. Mirusuvil was a rare exception to this series of acquittals and even then Ratnayake’s trial took 13 years to conclude. Ratnayake’s conviction was due in large part to the clear and credible testimony of an eyewitness to the massacre who spontaneously identified the guilty soldiers shortly after the crime. The conviction was unanimously upheld by the Supreme Court in April 2019 and was a long overdue moment of justice for the four families of those killed in the massacre. It is this rare exception that President Gotabaya Rajapaksa has chosen to erase through this pardon.

The power to pardon as used in Sri Lanka is just another way the State arbitrarily discriminates against Tamils. President Rajapaksa reportedly has relied on Article 34(1) of the Constitution to issue the pardon but has failed to produce the necessary reports and advice from relevant ministries required by the provision. Instead, Rajapaksa continues a long line of arbitrary and politicized presidential pardons that reinforce the selective application of the rule of law depending on one’s ethnic identity in Sri Lanka. Sri Lankan Presidents have time and again refused pleas for clemency from families of Tamil convicts under the Prevention of Terrorism Act including most recently President Sirisena’s refusal to consider Satchithanandan Anathasuthakaran’s plea for clemency after his wife passed away and his daughter pleaded for her father, who had been paroled to attend the funeral, to be released.

Ratnayake’s pardon comes at a time when the world is overwhelmed by the COVID-19 pandemic. This is no coincidence. The Sri Lankan Government has disproportionately militarised its response to the crisis and it is no wonder they would engage in other actions to be seen to be protecting the military in parallel. The COVID-19 Task Force, which should be lead by public health experts, is instead headed by the country’s Army Commander Shavendara Silva, a credibly accused war criminal who is named in UN reports and is banned from entry to the United States. Almost all other countries have entrusted leadership of their response to public health professionals, who as the situation escalates may deploy military as necessary, but not be lead by them. But in Sri Lanka, there are new reports every day as this pandemic continues of ex-military personnel being appointed to important positions in the response against the virus. The pardon of Ratnayake in the context of this highly militarised environment combined with the unconditional respect and admiration that the military enjoys from the majority Sinhala Buddhist community in Sri Lanka is simply President Rajapaksa consolidating an elected military dictatorship in Sri Lanka.

For over a decade, Tamil victims of the Sri Lankan state’s crimes during and after the armed conflict have had their calls for justice fall on deaf ears, and endured the pain of seeing the perpetrators of atrocities valorised and promoted by the Sri Lankan government. Throughout this time, the Tamil community has repeatedly pointed to the deep and structural unwillingness within the Sri Lankan state to fairly and credibly prosecute atrocity crimes committed by the military. Over the last year alone, an accused war criminal has been made commander of the Army, the government has withdrawn from the co-sponsorship of the UN Human Rights Council Resolution 30/1 process, and now the President has pardoned one of the only soldiers ever convicted for crimes against Tamils. We urge the international community to at least now set in motion the process for international criminal justice – victims have waited long enough.