The Killing Squads: Inside the Philippines’ ‘War on Drugs’ 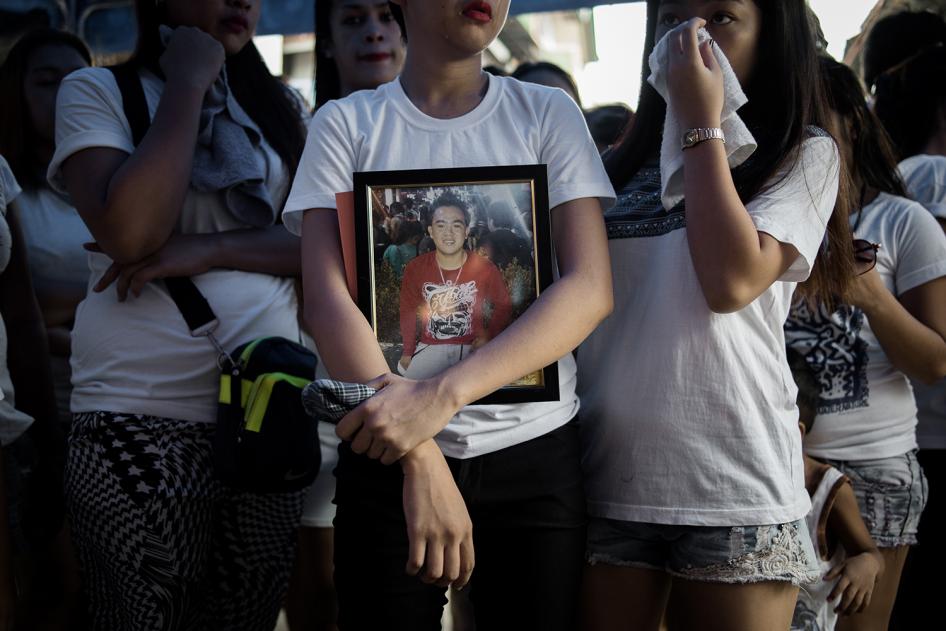 Image: The sister of Jefferson Bunuan carrying his photo as they prepare to take his body to Manilla South Cemetery. August 1, 2016.© 2016 Carlo Gabuco for Human Rights Watch.

More than 7,000 people have been killed in the Philippines’ bloody “war on drugs.” New Human Rights Watch research finds that the killing campaign against suspected drug users and dealers, openly encouraged and applauded by President Rodrigo Duterte, is effectively a war on the urban poor that could amount to crimes against humanity. Human Rights Watch’s emergencies director, Peter Bouckaert, has made two trips to the capital, Manila, to document this unprecedented mass wave of killings. Stephanie Hancock asked him how Human Rights Watch was able to track the police killing squads.

More than 7,000 people have been killed in Duterte’s anti-drug campaign. What is it like in Manila?

During the daytime things appear relatively normal, and in the middle class areas you’d barely notice this killing campaign. It’s very much focused on the poorest areas. There, the terror is very real. As soon as night falls, the killings begin. At one point as many as 35 people were being gunned down in Manila every night.

How did you and your team work?

We worked from 10 p.m. to 4 a.m. investigating the latest killings. There are always two distinct versions of reality: the police version, which invariably claims that the suspect fired on the police, who then killed him in self-defense, and the relatives’ version, claiming their family member was killed in cold blood and that evidence of drugs and guns was planted. Our job was to try to figure out which version was the reality. We had to be very careful because with 7,000 already dead, everyone feels like they could be next.

How quickly did you get to crime scenes?

A vast network of people throughout Manila report these killings as soon as they happen, for example using secure WhatsApp groups. We had to move fast. We had a brilliant driver who’d served as a bodyguard driver for VIPs, so he knew what he was doing.

The killings start just as people are going to bed. They normally involve a squad of around eight to 10 armed, masked men in civilian clothes on motorcycles looking for the person targeted, and then pulling them out of their homes and executing them. These are very heavily policed neighborhoods, and it’s simply impossible for a group of masked armed men to go around, night after night, without being picked up by the police. So that really was our strongest clue that all of these killings are being carried out by, or in cooperation with, the police.