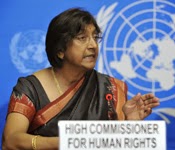 A 20-20 Human Rights Vision
Statement by the UN High Commissioner for Human Rights Navi Pillay for Human Rights Day, 10 December 2013
Twenty years ago, a historic document was adopted in Vienna. It crystallized the principle that human rights are universal, and committed States to the promotion and protection of all human rights for all people, regardless of their political, economic and cultural systems.
Among many other significant and ground-breaking achievements, the Vienna Declaration led to the creation of my Office – the Office of the High Commissioner for Human Rights.
Since then, there have been many advances – indeed more than people perhaps realize.
The fundamentals for protecting and promoting human rights are largely in place: these include a strong and growing body of international human rights law and standards, as well as institutions to interpret the laws, monitor compliance and apply them to new and emerging human rights issues.
The key now is to implement those laws and standards to make enjoyment of human rights a reality on the ground. The political will, and the human and financial resources, to achieve this are too often lacking.
The 20 years since Vienna have also, unfortunately, seen many setbacks and a number of tragic failures to prevent atrocities and safeguard human rights.
In several instances where deplorable, large-scale violations of international human rights law were occurring, the international community was too slow, too divided, too short-sighted – or just plain inadequate in its response to the warnings of human rights defenders and the cries of victims.
The Vienna Declaration should be viewed as a blueprint for a magnificent construction that is still only half built.
The conduct of States is more scrutinised than ever, and the expansion of civil society organizations and individual human rights activists over the past 20 years has been truly remarkable. Along with independent national human rights institutions, these are the bedrock of human rights development at the national level. But, it is a matter of deep concern that they are also facing increasing harassment and intimidation in many countries.
Women continue to suffer discrimination, violence and persecution. So do ethnic, racial and religious minorities, and migrants, as well as individuals because of their sexual orientation. This shows how far we still have to go.
Internal conflicts continue to produce horrendous and widespread human rights abuses. Peaceful protests by people exercising, and calling for, their legitimate rights are being ruthlessly crushed by authorities virtually on a daily basis.
Changing and shifting populations, fuelled by rising poverty, refugee movements and volatile global economics, make countering ‘fear of the other’ a priority.
And complex new challenges continue to emerge, such as climate change and global terrorist movements.
The way we operate in this world is also changing at breakneck speed.
Modern technologies are transforming the way we do human rights work. In 1993, the World Wide Web was just four years old, and its future use and reach could barely have been imagined, nor how fundamentally the Internet would affect our lives. Together with social media and IT innovations, these technologies are dramatically improving real-time communications and information-sharing. They are also magnifying the voice of human rights defenders, shining a light on abuses, and mobilizing support for various causes in many parts of the world.
But we have also seen how new technologies are facilitating the violation of human rights, with chilling 21st Century efficiency. In breach of international law, mass electronic surveillance and data collection are threatening both individual rights, and the free functioning of a vibrant civil society.
A Tweet or Facebook post by a human rights defender can be enough to land him or her in jail. Drones can be, and are being, used for positive purposes. But armed drones are also being deployed, without due legal process, for the remote targeting of individuals. So-called “Killer robots” – autonomous weapons systems that can select and hit a target without human intervention – are no longer science fiction, but a reality.
Their likely future deployment poses deeply troubling ethical and legal questions.
Continued vigilance is needed to ensure that new technologies advance rather than destroy human rights. No matter the scale of these changes, existing international human rights law and international humanitarian law governing the conduct of armed conflict remain applicable.
States must ensure that they are applied.
At the international level, a huge amount of work remains to be done to transform human rights from abstract promises to genuine improvement in the daily lives of all people, especially those who are currently marginalized or excluded.
The UN Human Rights Office will continue to work with all our partners to try to prevent human rights breaches from occurring. We will continue to be vocal about human rights violations. We will continue to ask States to do their part – the biggest part by far – to ensure that the tragic mistakes of the past are not repeatedand that the human rights of all are protected and promoted.
We can – and we must – do better.
The vision and goals formulated 20 years ago in Vienna are still valid. They are still worth fighting for now – over the next 20 years – and beyond
Share
Facebook
Twitter
WhatsApp
Pinterest
Email