The healing touch: on Muslim Ministers resigning in Sri Lanka 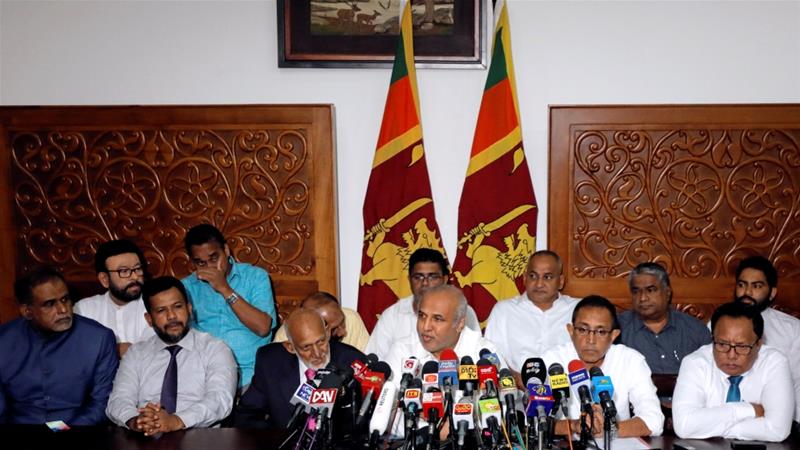 Sri Lankan leaders must move to end the demonising of Muslims.

The mass resignation of two Muslim governors and nine Ministers in Sri Lanka deepens a new fault line that has emerged in the island nation after the Easter Sunday blasts perpetrated by a fanatical Islamist group. Sinhala Buddhist hardliners had demanded that the Governors, Azath Salley and M.L.A.M. Hizbullah, and Cabinet Minister Rishad Bathiudeen, be removed for allegedly backing the terrorist group and interfering with the investigation. Stung by the aggressive demand at a time when investigators had not found any evidence implicating the three, all Muslim Ministers resigned in an act of solidarity. The campaign intensified mainly because of an indefinite fast by Athureliye Rathana Thero, a Buddhist monk, in Kandy. Thousands marched in his support. It is clear that the upheaval caused by the blasts, in which more than 250 people were killed in churches and luxury hotels, has caused widespread fear and mistrust across ethnicities. In a development that seemed too organised to be a spontaneous, emotional backlash, a campaign of violence and intimidation was launched against the Muslim community. This despite the fact that the National Thowheed Jamaat, the group behind the blasts, which included suicide bombers and was led by the radical preacher Zahran Hashim, has been dismantled. Hundreds have been arrested and the plot possibly inspired by Islamic State propaganda has been unravelled. It is intriguing that the government is not made accountable for the failure to act on advance intelligence on the attacks, but the community is being targeted.

Ever in need of new enemies and a blameworthy ‘outsider’, the majoritarian impulse in any society is likely to be awakened by an event as catastrophic as a religiously motivated attack. However, it is Sri Lanka’s misfortune that anger against the perpetrators has been turned by some influential sections into fear and hatred towards Muslims. The President and the Prime Minister, who belong to the two main national parties, have not taken a firm stand against the disproportionate influence some Buddhist monks have on the political situation. Not many have called out the campaign of hatred. Finance Minister Mangala Samaraweera has decried the allegation that one of his ministerial colleagues is in league with terrorists, and has boldly challenged “politicians, religious leaders and media moguls trying to incite racial and religious hatred”. Last month, a wave of violence swept through some Muslim habitations. A concerted campaign is now on to demonise the community, and one extreme example is the allegation that Muslim doctors were surreptitiously rendering Sinhala women infertile. Having emerged from a destructive civil war, Sri Lanka needs to focus on rebuilding inter-ethnic trust and ushering in a new egalitarian order. It will be ill-served by a conflict between communities.