The government cannot violate the rights acting through the MOD 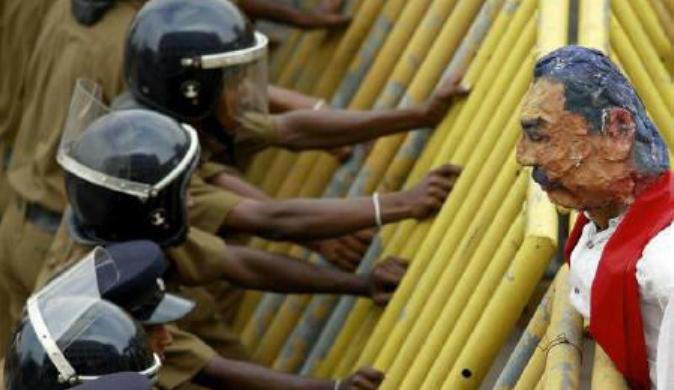 [Duty of the police to protect peoples’ rights; pHoto: internet]
Democratic Governance, Voluntary Associations and People’s Rights by Friday Forum—
Some months ago the Friday Forum issued a public statement that reflected on certain emerging trends in our country, and posed the question whether Sri Lanka is moving towards authoritarianism. Though circulated widely, this statement did not receive extensive publicity in the national newspapers. A recent letter issued “To all NGOs” by the Director/Registrar of an Institution known as the “National Secretariat for NGOs” located in the Ministry of Defence confirms our concerns that the government is on a dangerous path that will soon erode every basic norm of democratic governance.

This letter of the National Secretariat is titled “NGOs acting beyond their mandate.” It states that “it has been revealed that certain NGOs conduct press conferences, workshops, training of journalists, and dissemination of press releases.” These are activities which are described as “beyond their (NGOs) mandate.” The letter demands that “all NGOs should prevent from such unauthorised activism with immediate effect.”

This circular clearly violates the rights of the people under our Constitution, as well as legally binding international treaties ratified by the Sri Lankan State before this government assumed office. The rights of the Sri Lankan people to freedom of association, access to information, and freedom of speech and expression, are guaranteed in specific provisions of our Constitution. They have been interpreted by our Supreme Court and accepted as critically important areas for realising the fundamental rights of our people.

In Channa Pieris v. The Attorney General (1994) Justice A R B Amerasinghe expressed the views of the Supreme Court and stated that the citizen’s right to freedom of association (under Article 14 (1) (c) of our Constitution) is linked to other freedoms, including freedom of thought and conscience (Article 10), and the right to free speech and expression (Article 14 (1) (a). Group associations, he said, advances these rights. In the Janaghosha case (1994) Justice Mark Fernando said that these articles of the Constitution “recognise the right of every Sri Lankan to be different; to think differently; and to have and to express different opinions – not merely a right to dissent privately in silence but to communicate disagreement openly by word, conduct or action by peaceful and lawful means”. “Dissent or disagreement,” said Justice Fernando “is a corner stone of the Constitution….” His Lordship stated that democracy requires not merely that dissent be tolerated, but that it be encouraged. In Wanigasuriya v. S I Pieris (1985) GPS de Silva (subsequently Chief Justice) said that “a democratic polity … implies that consent (of the governed to be governed) shall be grounded in adequate information and discussion aided by the widest possible dissemination of information from diverse and antagonistic sources.”

Popular terms such as “accountability” and “transparency” are at times used with reference to NGOs by unscrupulous persons both within and outside the Government, to promote their own agendas. We must remember that NGOs are voluntary associations of people for purposes that they define for themselves. They are established in Sri Lanka according to diverse frameworks including under the Companies Act 2007. Some NGOs have registered under the controversial Social Services Act, and agreed to provide information on their budgets and work programs. NGOs are accountable like private persons only if they break the law of the land. The existing laws and procedures should not restrict NGOs and the people’s fundamental rights under the Constitution, including the freedoms referred to in the above decisions of the Supreme Court. If there exist laws and practices that contravene these basic principles of democracy and our right to freedom of association and expression, then such laws should be repealed or amended, and such practices abandoned. Our laws and practices should always be within the principles of the fundamental rights assured by our constitution and the international standards to which our country has subscribed to better secure the rights of our people.

The duty of the Police
Police officers, at the same time, have a duty as officers of the state to ensure that people can exercise their right to assemble together peacefully and enjoy their right of free exchange of information and views. Such assemblies must be protected from invasion by miscreants or other uninvited persons, as liberty of the individual needs as much protection from other individuals as from governments.

The Government and the current Foreign Minister consistently refer to the rights of a sovereign Sri Lankan State to resist national and international review of the government’s performance on human rights. They do not seem to know, or are deliberately concealing from the public, the fact that the concept of the sovereignty of a State has been modified significantly by many decades of development in Constitutional and International Human Rights law.

State is bound by international law
A state which has a national constitution guaranteeing the enforceability of citizen’s fundamental rights, and a state which is bound by international law under treaties that it has voluntarily signed, must fulfill legal obligations to citizens under these instruments. The Sri Lankan state has surrendered sovereignty to the extent that it has voluntarily agreed to have its performance reviewed both by its citizens and the community of member states of the United Nations. The government, acting through the Defence establishment, cannot violate the rights of the people that elected it to public office, and justify these violations by referring to state sovereignty. Our Constitution says very clearly that “In the Republic of Sri Lanka sovereignty is in the people, and includes the powers of government (legislative power exercised by Parliament, executive power exercised by the President) fundamental rights and the franchise” – Article 3 and 4 (a) and (b). The perception that any critical review of government performance by the people including by NGOs and civil society is an act of treachery, which undermines the independence and sovereignty of our country, has been rejected time and again in interpretations of our national Constitution by respected judges of the apex court, the Supreme Court of Sri Lanka.

NGOs are important actors that have recognised legal status under national and international law, to raise awareness on issues concerning governments’ performance relating to human rights protection and fulfillment. Sri Lanka as a member state of the United Nations must conform to these current norms on NGO and civil society participation, and their role and responsibilities in evaluating the human rights situation in our country. All the activities mentioned in this letter of the NGO Secretariat fall within and not outside the mandate of NGOs, supporting critically important citizens’ rights.

The criticism of the circular after it was sent to NGOs has led to contradictory statements by officials. The External Affairs Ministry issued a strong statement justifying the circular as a legal order because NGO’s were failing to follow guidelines set for registration under the Social Services Act. However, Prime Minister D. M. Jayaratna stated in Parliament that the circular from the Ministry of Defence was not an order but a circular of “instruction” with a “request” to act within the guidelines that NGOs had accepted at the time of registration.

The public should note that the circular quoted above states that “NGOs should prevent from such unauthorised activism with immediate effect”. Is this the Prime Minister’s idea of language of gentle persuasion or is this a military order from the Defence Establishment?

The policy-making establishment of NGO Secretariat and the Ministry of Defence seem unaware of the laws of our country, or are deliberately adopting policies that violate them. It is shocking that the Prime Minister and Ministry of External Affairs are seeking to justify these violations and the Defence Ministry circular on NGOs, supporting an erosion of our Constitution and the law of the land on the peoples’ right to freedom of association, freedom of speech and information.

The recently issued and obnoxious circular to NGOs must be challenged by the people of this country. We must not legitimise this public rejection of the norms of democratic governance by a government that has been elected to hold office on behalf of the people. We cannot allow an erosion of the Constitutional guarantees on peoples’ rights by a defence establishment that is steadily and dangerously acquiring a status and role in government that is both illegal and dictatorial.

On behalf of The Friday Forum;