The Emerging Political Vacuum in Sri Lanka: Is JVP the Answer? – Sunanda Deshapriya 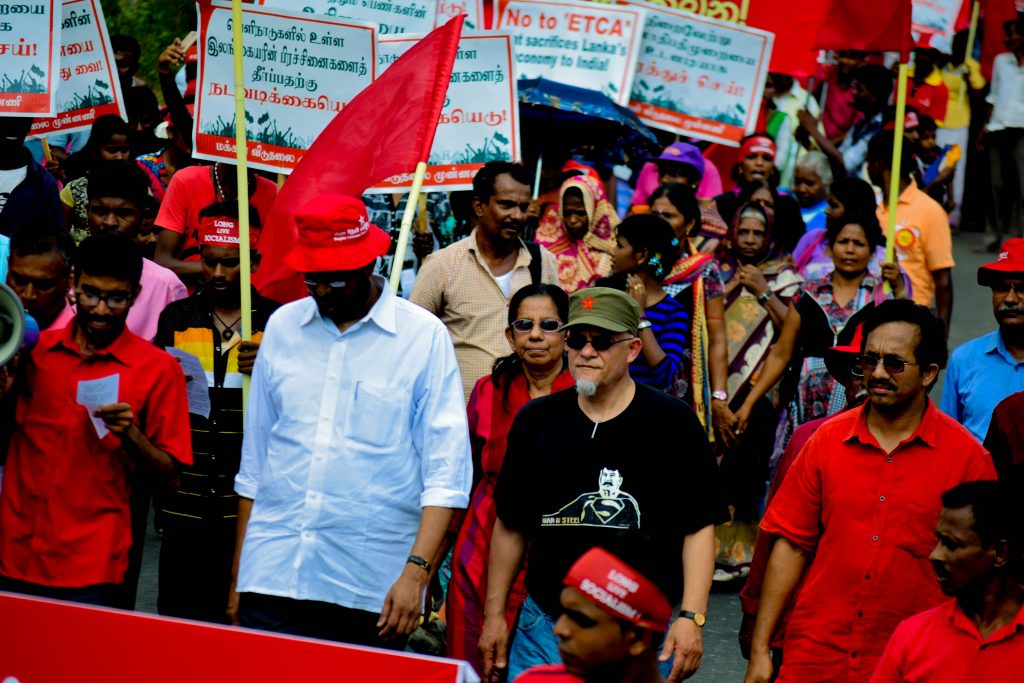 If there is one question that troubles many rights activists in Sri Lanka today, it is the current political instability within the coalition Government led by Ranil Wickremesinghe and Maithripala Sirisena government and their seeming inability to stop the Joint Opposition, unofficially spearheaded by the Rajapaksa family, from capturing power again.

Both President Sirisena and Prime Minister Wickremesinghe have lost the political credibility they had in January 2015. Sirisena’s somersault in fortune was undoubtedly escalated by the irregularities with the Central Bank bond issue. In my opinion, Prime Minster Wickremesinghe should be held accountable. Yet this still does not justify Sirisena’s inexplicable political circuses since, which have weakened the governing coalition.

Sirisena has given away the opportunity to transform the Sri Lanka Freedom Party back to a centre-left social democratic party. His political reactions are knee-jerk and lack any political vision. Often he contradicts himself with off-the-cuff utterances. He has become a kind of political clown, who performs to appease the crowd.

Wickremesinghe, on the other hand, has not been able to be a change agent in any meaningful way. He has strengthened the grip of the Royal College connection on the United National Party and rules like a dictator. His economic policies has not worked to the betterment of the people. UNP does not have a second-level leadership that can make a difference. Both politicians in line for succession of the UNP, namely Sajith Premadasa and Navin Dissanayake are conservative, Sinhala nationalists. Both have not shown any incisive knowledge of present day political realities, locally and internationally.

The “yahapaalana” government has now more or less abandoned the constitutional reform process, as well as the accountability process. The recent proposal by the government to appoint the Rajapaksa era Ambassador to UN Human Rights Council, Dr. Dayan Jayatilleka as ambassador to Russia alone symbolises the turnabout the government has taken on the accountability issue. It was only few weeks ago that Jayatilleka opined any future Rajapaksa rule should be able to rollback the 2015 UNHRC resolution on Sri Lanka which called for a comprehensive transitional justice process.

On the other hand both coalition parties are mired in corruption and nepotism. As part and parcel of the corrupt Sri Lankan political class, the majority of politicians within both parties consider being elected as a member of any level of governing institution as a way to amass wealth and power.

In 2015 the people of Sri Lanka voted in Sirisena, the common candidate, as President in the hope of unveiling a new political culture. This dream is shattered more than ever today. Today Sirisena’s politics are gravitating towards the Rajapaksas. Sooner or later both factions will merge, leaving few behind. In whatever form, the return of the Rajapaksa family rule, now seems inevitable. Only a political miracle can stop them from taking over the country and the SLFP.

It is in this context that we need to look for a people’s alternative to both these parties. The Janatha Vimukthi Peramuna, (JVP) has been involved in politics of Sri Lanka for more than a half a century. It has tried armed struggle as well as Parliamentary politics to become a viable alternative to both ruling parties and so far has not succeeded.

JVP is the only party outside the establishment which has a countrywide presence, a network of activists and supporters except in the North of the country. It has a set of tireless and experienced male leaders. And in its leader Anura Kumara, they have a mesmerising public orator and a charismatic public figure. The JVP leadership is not corrupt and has shown genuine dedication to their course. But as shown by its marginal representation in Parliament these qualities are not sufficient to become a political “remote control” in their own parlance.

Unfortunately the JVP leadership has not shown any incisive intellect, neither has it been able to attract personalities of intellect.

For almost the quarter of a century the party has been in Parliamentary politics it has not been able to pass the 10 percent margin of votes cast. The JVP is engaged in an isolationist politics, probably coming from its umbilical cord. Sectarianism was one of the major traits of the JVP of 1971 and onwards. JVP, its leaders as well as members consider themselves as the only correct, puritan movement in the country thereby ‘caging’ themselves away from all other social movements and activism. It has never been able to create a genuine broad front. For JVP coalition politics or networking is to make use of the other and not to work as equal partners. This is one of the major reasons that the JVP has not been able becomes a peoples’ movement.

Probably this behaviour comes from its dogmatic Marxist – Leninist ideology. The JVP marches under the banners of Marx, Engels, Lenin and its former leader Wijeweera. But it has not made any critical examination of the failures of their ideology in practice, nor has it examined the degeneration of Communist countries into one party dictatorships.

The JVP hasn’t had a theoretician who can change the course of the party after its founding leader Wijeweera. The present leadership of the JVP consists of only followers, not independent thinkers. This is one of the reasons for its inability to adopt to political realities of the present day world. It has remained male dominated, dogmatic and pipe- dreaming. It has not been able to embrace evolving environmental and non-discriminatory politics.

Its stoic silence when Sirisena banned females from buying alcohol and working in bars that sell alcohol is just one recent example of this. Another example is the ignorance of the university student movement it leads. The JVP politics have almost erased any intellectual debate on contemporary issues within our universities. Our universities have become places of protests and ragging instead of centres of learning. Although movements with radical ideologies such as green-left–non discriminatory politics have found their support among upward moving city and urban communities around the world, in Sri Lanka JVP remains a rural movement. Its main slogan for the last local authorities election was ”Gama hadanna apata denna”. (Give us the village we will develop it).

If JVP wants to become the third force it needs to make a paradigm shift in its politics and organisation. The JVP needs to aim at 10-20 percent of votes who are not interested in obtaining any personal advantage by voting for a particular party. It needs to learn the politics of networking and broad fronts. It needs to attract smaller left-leaning sections among the minorities, who shun identity politics of nationalist parties. Overall it needs to be a modern social democratic party with a green left and non discriminatory outlook. Needless to say that acceptance of rights of the numerical ethnic minorities and social minorities is a must to become a third political force in Sri Lanka. Equal importance should be given to a self critical look at JVP’s violent past. Neither the banner of popular Sinhalese nationalism nor their dogmatic Marxism will help them to break free from their 5 percent vote-bank.

As things stand now, it is very difficult to foresee such a change coming from the JVP leadership. It has become a prisoner of its past. Until such a change has begun or a new socio-political movement gathers shape, Sri Lanka may not see an alternative third political formation which we can be a part of and be proud of.