Tamil people are not satisfied over govt’s slow progress – TNA 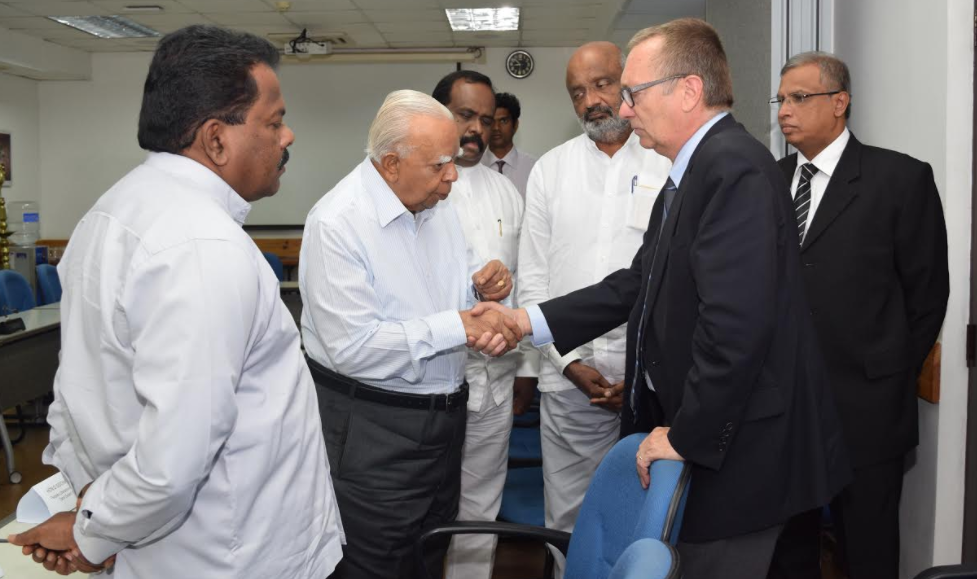 A meeting was held between the Tamil National Alliance led by R. Sampanthan and visiting
United Nations Under Secretary General for Political Affairs Jeffery Feltman today at the UN
office in Colombo.

Mr. Sampanthan raised concerns related to matters that affect the day to day life of the Tamil
people living in the North and the East. He highlighted that lands belonging to people must be
returned to people. “there is no justification for the Government not to release these lands even
after 8 years since the war came to an end” he noted. Speaking further on the land issues Mr.
Sampanthan pointed out that the armed forces are engaged in cultivation activities in these
lands that severely affects the livelihood of our people.

Speaking of the Missing persons Mr. Sampanthan noted that there had been over 20,000
people who went missing as per the submissions given to several commissions. And he further
clarified not all of them belong to the armed group. People want to know the truth as to what
happened to their loved ones, people are living in trauma, and this must come to an end he
added. “The Office of the Missing Persons should be established soon to give some relief to
these people” Mr. Sampanthan noted.

Speaking on the Prevention of Terrorism Act Mr. Sampanthan noted that it was an undertaking
given by the government to the International Community to repeal this law. Yet very little
progress has been made in this regard he added. Mr. Sumanthiran pointed out that Government
has made an explicit promise on this to the UN. Yet Ministers in Government make statements
that are contradicting the very same promise. The TNA leader pointed out that the government
cannot afford to go backward and that it is the responsibility of the International Community to
ensure that these promises are met without delay.

Speaking on the framing of a new Constitution Mr. Sampanthan said, over a period of 30 years
so much of work has been done regarding this matter and every successive Government
wanted to change the constitution including former President Mahinda Rajapaksha. After the
change in the Government in 2015 moves were made to make this a reality, and our people had
many expectations on this matter. But there seems to be a certain degree of uncertainty
especially among the SLFP members who are in the Government he added. They seem to be
thinking of their own political agendas and not the overall interest of the country. They must
come together and give their cooperation to this matter.

“We cannot indefinitely wait on these matters, we are prepared to work on these matters he said.
TNA Leader stressed that TNA’s demand is not to divide the country but to find a solution based
on consent and the consensus of political parties and people.” We cannot allow these people to
play petty political games and victimize our people once again” Mr. Sampanthan said.
Speaking on the UN resolution Mr. Sampanthan said that the progress shown in the
implementation of the resolution is not satisfactory and Government must expedite its actions in
regard to this. We did not oppose the time extension asked by the government on this because
we felt that this time frame will be utilized to make progress to the maximum by the government.
But looking at the progress made in the past few months the Tamil people are not satisfied he
added.

Commenting on the concerns raised by the TNA delegation the United Nations Under Secretary
General assured that the UN is watchful over the current developments in the country. He
further added that the substance and the processes of the Constitution are vital not only for long
term political solution but also for the economic development and prosperity of the nation.
He further noted that the Government’s good intentions must be translated into actions where
the people on the ground could experience the difference. He assured that the Secretary
General and the UN community is very much concerned about the progress in some of these
important matters, and assured the UN’s continuous constructive engagement with Sri Lanka in
the future.

TNA delegation led by Hon. Sampanthan was comprised of Parliamentarians M.A.
Sumanthiran, Selvam Adaikkalanathan, S. Sitharththan and Sivashakthi Ananthan while Under-
Secretary General for Political Affairs Jeffery Feltman along with the UN Resident Coordinator
Ms. Una McCauley and other UN officials participated in the meeting which lasted for one hour.