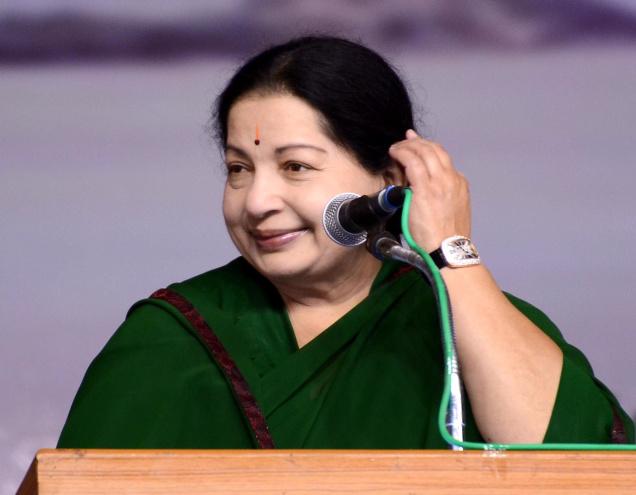 India must take a historic stance on Tamils issue: Jayalalithaa

a on Monday joined other political leaders of the State to demand that India take a strong stand in support of the US-sponsored resolution on Sri Lanka’s human rights record in the 22nd Session of the UN Human Rights Council and “more importantly,” move necessary independent amendments to further strengthen the resolution.

In her letter to Prime Minister Manmohan Singh, the Chief Minister gave a host of specific suggestions in making the text of the resolution stronger.
She wanted the operative paragraph 1 of the draft text of the resolution to mention that there should be an unequivocal call for a credible, independent, international mechanism to prosecute “genocide, war crimes and war criminals” and the accused should stand trial before an international court. “This process should be completed within a period of six months and the outcome reported for a special discussion in the 25th session of UNHRC in 2014.,” she stated.
In operative paragraph 2, there should be an insistence that the OHCHR [Office of the UN High Commissioner for Human Rights] report be implemented in its totality. The next paragraph should include that there should be a strong call to the Sri Lankan government to accept the establishment of an impartial, international institution to initiate credible and independent actions to ensure justice, equity, accountability, including investigation of violations of international law and reconciliation of all Sri Lankans, including Tamils. “This should include Sri Lanka providing a pragmatic political package to the Sri Lankan Tamils and restoring their equal rights of citizenship on par with the Sinhalese community,” she pointed out.
Among her other suggestions were a mention in the preambular para 5 (PP 5) of the UN Secretary General’s Panel of Experts report in addition to the Lessons Learnt and Reconciliation Commission (LLRC) report. In PP 9, while talking of reports of the continuing violations of human rights, the words, “serious concern and dismay” should be inserted instead of “concern.” In PP 10, the term, “condemnation” should be included with reference to the failure of the Sri Lankan government to fulfill its public commitments including on devolution of political authority.
She expressed dismay over the recent statements made by the Prime Minister and External Affairs Minister Salman Khurshid. “They do not give a clear indication of India’s stance, particularly with reference to the genocide which has taken place in Sri Lanka resulting in enormous loss of innocent, civilian lives and gross violation of human rights. It was disappointing that India had maintained a deafening silence when the US sponsored draft was taken up for discussion in the on-going UNHRC session.”
Recalling her memorandum presented to Dr. Singh in June 2011 and a resolution adopted by the Tamil Nadu Assembly in the same month on the issue of war crimes and the imposition of an economic embargo on Sri Lanka, she referred to India’s support to Resolution 19/2 adopted in the 19th HRC last year, calling upon the Sri Lankan government to implement the constructive recommendations of the LLRC report. The resolution, according to her, was relatively mild since the LLRC report itself had been viewed as “a flawed report.” not covering many of the points contained in the UN Secretary General’s Panel of Experts Report.
“The events and developments of the past year in Sri Lanka, as evidenced by the report of the Office of the UN High Commissioner for Human Rights, are a continued and sorry saga of human rights violations against the Tamils in that country,” she added.
The Hindu
Share
Facebook
Twitter
WhatsApp
Pinterest
Email