Tamil mood simmers yet again thanks to Lanka 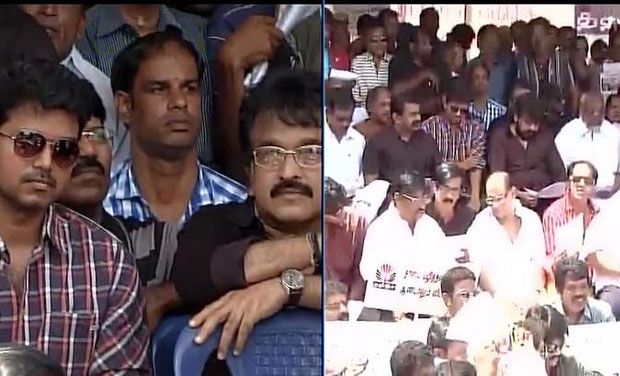 In what could be seen as inexplicable and disproportionate over-reaction to a Sri Lankan faux pas, a section of the Tamil film industry over the weekend called for shutting down the nation’s deputy high commission for southern India at Chennai.

Like the rest of the state, including the otherwise critical political Opposition, the film industry was protesting an inappropriate depiction of Prime Minister Narendra Modi and Chief Minister Jayalalithaa in a cartoon on the Sri Lankan defence ministry’s official website.

The cartoon had accompanied controversial Sri Lankan commentator Shenali Waduge’s analysis, ‘How meaningful are Jayalalithaa’s love letters to Narendra Modi?’ shared with some private websites. But their use in the defence ministry website made the difference to Sri Lanka’s critics in Tamil Nadu.

What was sought to be made out into a diplomatic episode ended without much bruise after the Sri Lankan ministry withdrew the objectionable article and cartoon — and also extended “an unqualified apology” to the prime minister and Tamil Nadu chief minister.

Independent of the immediate issues, the current faux pas has sort of revived the slackening pan-Tamil mood in Tamil Nadu. Earlier, it had got immersed in the parliamentary poll campaign, which was fought on domestic issues, as ever.

Now, the affront on Jayalalithaa in particular has been followed by pre-poll kind of protests against Sri Lanka and President Rajapaksa, including effigy-burning.

In western Tamil Nadu, in Salem city, a ruling AIADMK functionary, Vijayalakshmi, took an over-dose of sleeping-pills to try and end her life, unable to bear the humiliation to ‘Amma’.

Jayalalithaa has since advised party cadres against wanting to lose their lives, which were precious.

Not to take chances, or left behind, the state police reportedly persuaded the visiting Under-15 Sri Lankan cricket team.

To the credit of the police, they, at the same time, ensured secured passage for 150 Buddhist monks from Sri Lanka, when they landed in Chennai to take a train to north Indian destinations.

Even without the current faux pas, award-winning film-maker A R Murugadoss (of bilingual Ghajini fame) is in trouble with his next film, Vijay-starrer Kaththi (‘Knife’), after one of the two Sri Lankan Tamil producers was alleged to have had business links with President Rajapaksa’s family members.

Given the purported SLT financial clout over Kollywood, starting with the likes of Ayngaran’s Karunamurthy – who was the original producer of Rajnikanth-grosser Enthiran or ‘Robot’ — and over the Tamil film-market overseas, Murugadoss and Vijay were prominent among the protestors when the Tamil Film Directors Association called for one on August 4.

At the height of ‘Eelam War IV’, SLT overseas distributors reportedly pulled out Vijay and Ajith-starrers from overseas cinemas, citing poor patronage, until the actors had made good their earlier indifference by participating in film industry protests against the Sri Lankan government at the time.

It is unclear what linkage exists between protests against the Sri Lankan government and the revived demand for the closure of Sri Lankan mission, after similar demands used to be made by other groups too in the pre-poll era.

Reportedly the second largest Sri Lankan mission in the world after the one in London, the one in Chennai serves not only Indian tourists and traders from Tamil Nadu in particular, but also the 100,000 Sri Lankan Tamil refugees, both residing in TN/GoI-sponsored camps and outside.

The refugees, many of whom have been staying, studying and working in India, for nearly three decades, have had their marriages, births and deaths certified and recorded, and Sri Lankan travel documents issued at and by the Chennai mission.

According to periodic media reports, the mission also conducts ‘registration camps’ of the kind in district-towns, to help those who are unable to travel to Chennai for the purpose — at times cancelled at the last-minute, either after pan-Tamil protests at the venue or the reported reluctance of the State authorities, possibly owing the security considerations.

Incidentally, the Chennai DHC of Sri Lanka may also possibly be the single largest registration centre for weddings for Diaspora groups from any country anywhere in the world — and certainly of Sri Lankan Tamils.

Whatever the reason and/or sentiments, brides and grooms of SLT Diaspora families travel to Chennai from different parts of the world to have wedding solemnised before travelling to Sri Lanka, to offer prayers at places of worship of their choice and seek the blessings of family elders residing in the country, before returning to their homes and jobs in the West, hand-in-hand.

For now, however, it remains to be seen how the pan-Tamil sections of the politicos in particular would reverse or reinforce their positions viz the Sri Lankan government on this and larger aspects of the ‘ethnic issue’, after President Rajapaksa had told his nation’s editors that he ‘regretted’ the episode!

The author is a veteran journalist and director of Observer Research Foundation (Chennai Chapter).