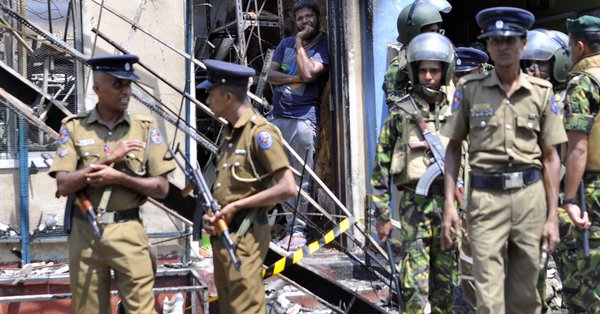 International outcry against the  violence against Muslim community in Sri Lanka is continuing, latest statement coming from  EU ambassadors. The  a statement  calls for perpetrators of hate crimes to be swiftly brought to justice:

“The recent attacks on communities are very worrying. It is important that the Government and the security forces take urgent action against hate crimes and ensure that the perpetrators of such actions are swiftly brought to justice. It is vital that all political leaders, religious and other community leaders condemn violence and make every effort to promote understanding and harmony between communities. The EU trusts that any actions taken under the State of Emergency will be proportionate and respect constitutional rights and freedoms.”

The United Nations in Sri Lanka  is  concerned about the recent incidents of communal violence and condemns these acts in the strongest possible terms, UN office in Colombo said today in a statement. “The United Nations urges authorities to take immediate action against perpetrators and to ensure that appropriate measures are swiftly taken to restore normalcy in affected areas,”
The United Nations also urges authorities, and all citizens to ensure that the rule of law is upheld, human rights are protected, and security and safety is ensured for all.

On 07th March High Commissioner Zeid told the on going 37 session of the Human Rights Council that  “I am very alarmed by recurring and continuing episodes of mob violence targeting ethnic and religious minorities, particularly Muslims”
US Embassy in Colombo issued a statement on  March 6, 2018 :  Rule of law, human rights, and equality are essential for peaceful coexistence.  It is important that the Government of Sri Lanka act quickly against perpetrators of sectarian violence, protect religious minorities and their places of worship, and conclude the State of Emergency swiftly, while protecting human rights and basic freedoms for all.

The Turkish foreign ministry said in a statement that “the Sri Lankan government will take the necessary steps to ensure that different religious and ethnic communities continue to live together in peace across the country.” The ministry also offered condolences to the families of the victims killed during the riots.