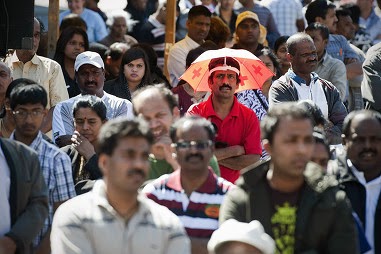 The Federal Migration Office has come under fire for wrongly rejecting asylum applications from two Sri Lankans who were arrested on their return to their home country and are still in prison. Following reevaluation, deportations are to resume. A report released on Monday referred to a series of blunders resulting from “systemic conditions”, which led to the wrong decision being made in 2011.  An external investigation into the matter was ordered after the Federal Administrative Court found the asylum applications to be valid, but only after the two men had been deported.
The Swiss Centre of Expertise in Human Rights and the United Nations Refugee Agency, which conducted the investigation, found that the asylum application assessments had not been thorough enough. The errors were exacerbated by too many people being involved in the cases, the investigation found.
In addition, matters were confused by a reorganisation of migration office staff and the situation in Sri Lanka shifting frequently after the cessation of hostilities in Sri Lanka in 2009.
The migration office stopped all deportations of Sri Lankans after the two men were imprisoned in 2013. Some 250 Sri Lankans were sent back to their homeland by Switzerland between 2001 and September 2013.
e)
According to the migration office, the investigation has led to the tightening of the guidelines for repatriation of failed asylum seekers. The temporary ban on deportations of Sri Lankans will be lifted, and the pending cases will be reevaluated.
The migration office has vowed to prevent a repeat of the incident with better training and education of staff and a range of other measures.
The decision to resume deportations was sharply criticised by Amnesty International, which considers human rights conditions to have deteriorated in Sri Lanka.