Surveillance, Harassment and Intimidation of Disappearances’ Activists in the North-East 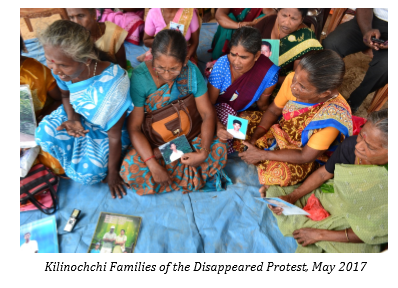 Over the last two years, the issue of enforced disappearances has become an increasingly central topic in the conversation around human rights and transitional justice in Sri Lanka, largely due to the efforts of families of the disappeared from the North-East who have taken to actively protesting the issue. On February 19, 2017, Tamil families of the disappeared in Kilinochchi, frustrated with the lack of action on the issue of disappearances, began a continuous roadside protest calling on the Sri Lankan government to meet certain demands including releasing a list of surrendees, a list of past and present secret detention centres and a list of all detainees under the draconian Prevention of Terrorism Act (PTA).2 The protest began a few weeks after families of the disappeared had staged a hunger strike in Vavuniya, which ended when government officials promised to meet their demands, only to subsequently renege on them.

Read the full  report as a PDF : ACPR Situation Brief No. 2- Surveillance, Harassment and Intimidation of Families of the Disappeared in the North-East