Suger in Food Drinks: Labels That Hide The Poison 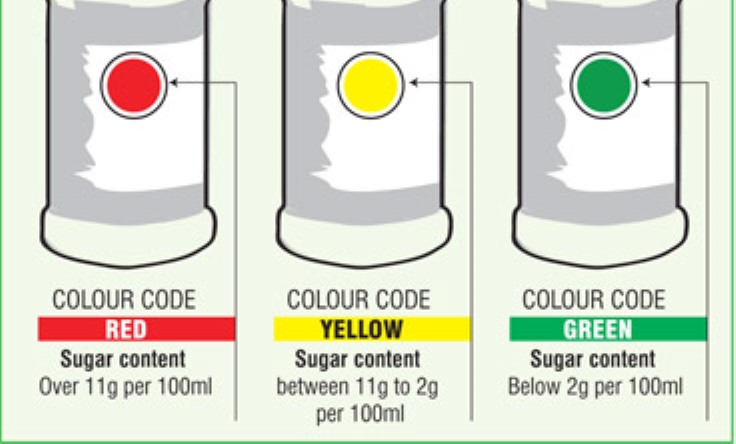 Their colours are as dazzling as their claims. Make a bee line to your nearest supermarket or favourite kade down your lane and you will find them prominently displayed on the shelves or front counters. Packed in different forms, colours and sizes, sold at different prices, there is no question that the market for fruit drinks whether artificial or natural is growing by the minute.

“Since the proposed regulations would require tea boutiques (small cafes), food outlets and restaurants to provide sugar and salt separately instead of adding these to the meal or drink, it took five years for the gazette notification to be implemented”

All thirsty adults and children nowadays never fail to pluck them off their shelves ignoring the less appealing bottled water, once the most ‘in-demand’ drink in the market, until their prices soared recently.

Bottled, packeted, in plastic cups sealed with covers and the newcomers – mini tetra packs with matching straws stuck with cellotape on the outside, have become a source of worry for most health experts since 99% of them contain sugar, one of the main causes for the unprecedented surge in type 2 diabetes , hypertension, cardiac arrest and other non communicable diseases ( NCDs.) in Sri Lanka and world over.

In a recent statement by Director General Health Services Dr P.G. Mahipala it was revealed that over 40 percent of the Lankan population were pre-diabetics or already had diabetes which had not been diagnosed. Worse still, more than 13 % of children, some below 12 years were now being diagnosed as pre-diabetics leading to special clinics being set up for them, to bring down their sugar levels, the result of high sugar and high carb diets.
Diabetic epidemic

As a first step to ending this diabetic epidemic, the Health Ministry, last week, announced a ‘Traffic Lights’ Colour Coding system. Beginning from this month ( August) the Health Ministry said, it would be mandatory for all sugary products to display colour codes according to the sugar content percentage they used. If the sugar content was over 11g per 100ml the colour of the label should be red, if it was between 2g to 11g it should be amber or yellow/amber and if below 2g the label should be in green to indicate it was safe to drink.

So, how does this new labelling scheme which uses traffic light colours that every road user is familiar with, benefit the consumer?

“Colour coding tells you at a glance if food items have high, medium or low amounts of fat, saturated fat, sugars and salt. Red means the food or drink is high in a particular nutrient and warns the public to consume such foods with due precautions. Amber indicates that one may consume such foods in medium amounts. Green signifies the healthiest choice. Following this Code will help control the spread of non- communicable diseases,” a Health Ministry official said.

He said, a meeting with soft drink manufacturers registered under the Sri Lanka Chamber of Commerce had been held recently to discuss the implementation of colour coding from August 1 as all soft drinks should display their sugar levels according to the contents.

Health Minister Dr Rajitha Senarathne has also been quoted as saying , ” The Ministry had made it mandatory for all to abide by the gazette notification, as the Health Ministry has been working towards the implementation of the rule for the last five years.”

Why five years? What does the Food Act say about wayside cafes serving excessive quantities of sugar in tea ? Is there a provision regarding this in the new traffic lights code for sugary drinks? Who is responsible for monitoring it? Who has the authority to deal with offenders violating it?

Since answers to these questions were not forthcoming from the Environment and Occupational Health unit, as its Director, Dr Gamlath refused to enlighten us, saying, “clearance was needed from higher authorities”, we quote a news report which cites Health Minister Dr Rajitha Senarathne as saying, “Since the proposed regulations would require tea boutiques (small cafes), food outlets and restaurants to provide sugar and salt separately instead of adding these to the meal or drink, it took five years for the gazette notification to be implemented.”.

How much sugar should we take? Is there a maximum limit?

The Director NCD Unit said: “The World Health Organisation has said the maximum amount of sugar a person should take is 30 grams per day ( 5 teaspoons). If the public follows these guidelines, we can control diabetes and all other NCDs in the country,” he said.

Nutritionists we talked to, agreed. They said, the average Sri Lankan consumes about 60 grams of sugar a day. About 70 percent of the nation’s deaths occur due to non-communicable diseases linked to the increased intake of salt and sugar over a long period,” they said.
Gaps

While it looks good on paper, the Traffic Lights Colour Code does have some inherent gaps which seem to have been overlooked .

The Head of the National Poisons Information Unit Dr Waruna Gunathileka is quick to mention them as he welcomed the system as a “step forward and timely initiative in controlling NCD spread.”

“Why is it targeting only sugary drinks?. Why not cereals, milk substitutes, biscuits and other foods that are also high in sugar content”? he asked. He said NCDs were the result of a combination of components and factors.

“When people think about Non Communicable Diseases ( NCDs) they think sugar is the only killer component that causes these chronic long term diseases. I believe one must also take into consideration foods that cause high Lipid Profile and High Blood Pressure as well,” he said. “We need to look at the bigger picture as NCDs are the result of a combination of components and factors,” he pointed out.

He also noted, most containers of fruit juices simply state that the product contains so many calories per serving. “But how does the average consumer count those calories in a small mini pack of juice when all he wants is to drink it and go? The display of nutritional information is another weak area.
Display

“All packs whether fruit juices or food products with sugar must have these codes. If the product has a high degree of sugar it should carry a red label , and green if it is safe to drink.

“That will help consumers to make an informed choice”, he said. ´There must be more awareness on this for the consumer and more education for manufacturers,” he stressed.

What about Energy bars said to enhance physical activity?

“Avoid them, if you are a pre-diabetic. They contain sugar and glucose which could send your blood sugar levels soaring,” he warned.

He also drew attention to the manner in which vendors of fruit juices and other food items display their products. “All distribution outlets must display these colour code charts along with their nutritional facts at prominent places. If that clause is not in the new Code, it must be included immediately,” he said.
Health impacts

Asked about chemicals and preservatives which could be found in these drinks he cites the 2011 circular under the Food Act which refers to chemicals such as Ethereal, Ethephon , Chlroethyl and Phosophonic Acid, used to artificially ripen fruits.

” Calcium carbide once sprayed on fruits could react and produce cyanide”, he warned.

So is there an alternative ?

” Eat fresh fruits rather than in juice form. Made into juice form it will result in a very high sugar content.” –GMOA

Government Medical Officers’ Association ( GMOA) spokesman Dr Nalinda Herath commenting on the colour coding for fruit juices, also welcomed it as a ‘ good move by the Health Ministry’, adding, it should be implemented immediately. He also drew attention to the unethical advertising of beverages by leading manufacturers during sports events e.g. cricket and rugby matches and inter school matches. “We have seen several huge bill boards and cut outs in school matches and some certificates even carried their logos,” he charged.

What do our readers think?