Struggle for Human Rights in Sri Lanka: Progress Despite a Difficult Legacy 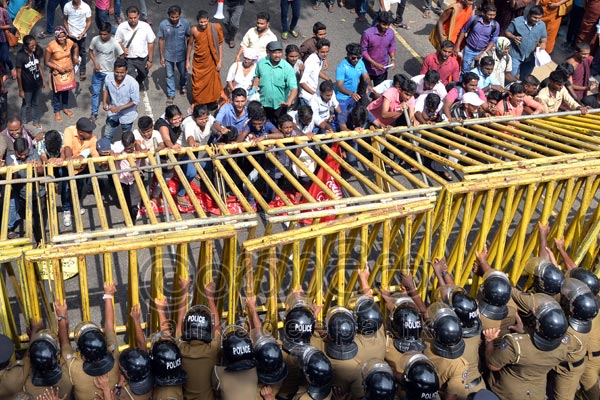 At a time when the world seems to be struggling mightily to put human rights at the forefront of a global discourse burdened by conflict, fear of terrorism and radicalisation, and real or perceived security threats of various kinds, mechanisms like the Universal Periodic Review (UPR) at the United Nations Human Right Council gain an added importance. The UPR was enacted in 2006 by the General Assembly of the UN as a process in which the human rights record of every member state is scrutinized by fellow member states and its adherence to obligations in the UN Charter, the Universal Declaration of Human Rights and other human rights instruments is tested.
Sri Lanka is reporting under the UPR mechanism for the third time this week in Geneva, with previous reports occurring in 2008 and 2012. Following more than three decades of conflict and a subsequent government which had a dubious record on human rights, I am happy to represent a government which has made vindication of human rights central to its policies. Considering the difficult legacy, it was always to be expected that the process was never going to be easy. However, there are many signs of progress on the front of human rights we were proud to present in Geneva.

On 1 November, the government launched Sri Lanka’s National Human Rights Action Plan 2017-2021, which outlines our vision for human rights during the next five years. The plan, informed by wide consultations, contains feasible, actionable and relevant action points pertaining to ten thematic areas – Civil and Political Rights, Prevention of Torture, Rights of Women, Rights of Internally Displaced Persons and Returning Refugees, Rights of Migrant Workers, Rights of Persons With Disabilities, Economic, Social and Cultural Rights, Rights of Children, Labour Rights and Environmental Rights. The goals set out in the plan are clear, and they will strengthen the existing national mechanisms for the protection and promotion of human rights through substantial constitutional, legislative, policy and administrative frameworks. The recently enacted budget clearly shows we are serious about seeing this plan through, and have created effective ways of monitoring and evaluating its implementation.

The National Human Rights Commission (HRCSL) has been further strengthened with the appointment of independent commissioners by the Constitutional Council. The HRCSL has the authority to entertain complaints and conduct investigations regarding infringements or imminent infringements of fundamental rights, and to provide for resolution by conciliation and mediation. It also monitors the welfare of persons in detention. The government has progressively increased resources allocated to the commission as one of the key human rights institutions and will continue to support and safeguard its independence.

We have consulted and listened to the people on how to go about addressing the needs resulting from the decades of conflict and suffering.

These extensive consultations carried out by the Consultation Task Force comprising an 11-member all-civil society group inform our approaches to reconciliation and dealing with the past. We have also adopted the National Policy on Reconciliation based on the feedback we received from communities and multiple other stakeholders.

As one of the key measures aimed at addressing the suffering of the families of the missing persons, the government enacted legislation for establishing the independent and permanent Office on Missing Persons (OMP), and it came into operation on the 15th September 2017. On 20th October 2017, the Constitutional Council advertised, in all three languages, calling for applications to fill the seven posts of Commissioners. This Office is mandated to take all necessary measures to provide for a mechanism to address the issues and concerns related to missing persons. We cannot claim to be a society where the rights of all citizens are equally respected if we are blind to the suffering of mothers still searching for their children. In the budget for 2018, we have proposed setting aside 1.4 billion Rupees for the operation of the OMP for next year.

An office is to be established to address reparations to the victims of the conflict, and the draft legislation prepared by experts in this regard is currently under discussion. Meanwhile, the Government has already paid Rs. 574 million and Rs. 605 million in 2017 and 2016 respectively, as compensation for victims, through the Rehabilitation of Persons, Property and Industries Authority (Sri Lanka) – REPPIA. A draft law for a TRC is also under consideration. The government remains firmly committed to developing a domestic mechanism to address justice and accountability on alleged human rights and humanitarian law violations. The architecture of the mechanism will be devised taking cognizance of our commitment to fight impunity, as well as of all relevant factors that shape Sri Lanka’s constitutional and political context.

In 2016, a total of 11,253 houses (Rs. 8,963 million) were handed over to Internally Displaced Persons (IDPs) and an additional allocation of Rs. 4,785 million has been made in the 2017 budget for the construction of 5,732 houses. In the next year’s budget, we have proposed an allocation to support the construction of 50,000 brick and mortar houses in the North and East. It is clear for all to see that our commitment to redressing those affected by the conflict in all areas of our country is rooted in action, not only words.

Amongst many other positive developments, the government endorsed the ‘Declaration of the Commitment to End Sexual Violence in Conflict’ on 12th January 2016, including by ending impunity for such crimes. To address the specific issues faced by Women Headed Households (WHH) who have been identified as a vulnerable social group, the Cabinet of Ministers approved a National Action Plan on WHHs in October 2016 which focuses on health and psycho-social support, livelihood development, protection, social security, support services systems, as well as national level policy formulation and awareness building.

Regulations and measures have been put in place to eradicate child labour to ensure the full enjoyment of the rights of the child. Various initiatives are underway on this front, including the concept of Child Labour Free Zone initially piloted in the district of Ratnapura, successfully eradicating child labour in that district. The success of this project has now been replicated in all the 25 districts in the country.