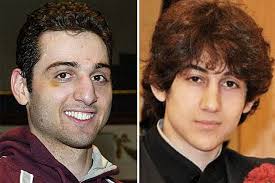 The UNP team that is touring the north had proved that the Rajapakse regime’s heavy security zone melodrama in the north which is a prohibited zone for those who are in the political opposition respecting Democracy , is in fact a Rajapakse regime national zone that welcomes the Boston bombing terrorists with garlands.

The Forces on the instructions of Mahinda Haturusinghe the Commander in chief of the north , has refused to grant permission to the touring UNP team and the UNP leader to visit the heavy security zone on the ground that without the defense Ministry permission , entry into the zone cannot be allowed.

The UNP team had then spoken on the phone to the ‘Thal Sevana’Hotel within the zone that is being run by the defense Ministry, to book a room. When the Hotel authorities had inquired from them ‘on whose behalf is this room being reserved?’ , the UNP team had given the name of terrorist Tamerlan  Tsarnaev, the Boston bomber about whom the whole world is currently talking , and added that the room is for Tamerlan Tsarnaev and his elder brother. Manori ,the Hotel officer who answered the call had gladly said ‘ yes, you can’ , and to pay the charges of Rs. 5000/- by depositing the amount to the People’s Bank account in the name of ‘Thal Sevana’. She has also given the account No. and told , the room that has been reserved for them is ‘Lilly’.

When she inquired about the vehicle by which they will be arriving at the Hotel , they had given a three wheeler No. GY 8766 going along the road.

In other words , this Hotel which is situated in the high security zone under the SL defense Ministry which is so cautious , even not to allow the opposition party politicians to enter this security zone had without any issue or hesitation reserved the room to welcome the Boston terrorist bomber and his elder brother !!

So this is Sri Lanka under a Rajapaksha regime where a defense secretary gladly welcomes notorious foreign terrorist bombers into his high security zone , but strictly declines permission to the sons of the soil just because they are in the opposition political camp . Mind you these opposition politicians are elected representatives of the people unlike this buffoon of a secretary who is just a government servant (not a ‘ government master’) though he parades as the high and mighty of the land after fleeing for life to the US to become a ‘yankee doodle do’ during the SL war for traitorous reasons , but now after returning when the war is won by others for him and his regime, is conducting himself as ‘ anything I can do’ , riding the high horse – only to have a heavy fall sooner or later.

In a nutshell , with this defense secretary , even a world notorious terrorist foreigner can reserve a room in the hotel run by his Ministry in the so called high security zone.

It is a pity that this defense Secretary’s buffoonery , and the Medamulana moronic regime’s tomfoolery stand exposed clearly by the unlawful and high handed conduct of Gota- baya , the puny government servant.

The Nation must thank the opposition MPs including Ravi Karunanayake for being able to demonstrate to the SL nation and the world via this episode what treason and treacheries this Medamulana regime and its omnipotent defense Secretary are indulging in directed against the motherland.
LeN