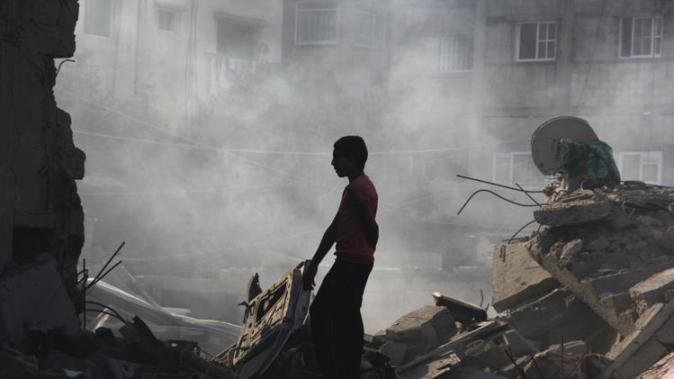 In the past few weeks most interesting things happened in the midst of tragedy and sorrow. Whole world was disturbed by what was happening in the Middle East. There were campaigns inside Lanka too, against the brutal shelling done by Israel. Even cabinet ministers were involved in organizing such demonstrations.

However in the middle of this turmoil it was revealed that Mahindra regime supports the state of Israel! In fact Lankan state is reconstructed recently to behave in the same manner as the Israel state. Also we were told that President Mahinda believes, the way to deal with national liberation terror is to crush them in the manner Israel is doing.

On that basis world support should be mobilized for Israel. All those conclusions can be made from what Sri Lanka’s Ambassador to Israel and former Chief of Staff Donald Perera said. He says, “No one wants bloodshed. The other side (Palestinians) should be offered direct negotiations, without preconditions, to determine its level of seriousness. These talks should focus on trying to reach a compromise that would allow both sides to sign an agreement. In case the other side shows it is not interested in a compromise, (Israel) must move on to the military phase with full force.

The government will have to explain to the citizens that (Israel) is headed for a long and difficult struggle that will exact a heavy price, but at the end of this struggle the country’s situation will be much better.” He added, “Once you have the public’s support, you should fight relentlessly until all of the terror hubs are destroyed. There is no going back. For years Israel has aided our war on terror through the exchange of information and the sale of military technology and equipment.” We should be thankful to Mr. Donald Fernando for coming out with the truth, which is not revealed by the leftist cries made time to time, by various ministers including president Mahinda himself. In such moments they imitate the behavior of Castro or Hugo Chaves and condemn the imperialist conspiracies of Americans!

It is in the light of ambassador’s revelation that we could understand the Presidential proclamation, came after five years of stringent denials and rejections, and zero casualty claims. President Mahindra Rajapaksa issued a proclamation recently, announcing the launch of a domestic investigation into alleged war crimes and the conduct of all those involved in the war. What is more he has enrolled the expertise of three of the world’s top war crimes prosecutors.

The suddenness of the move surprised even the cabinet ministers; in particular Wimal Weerawansa, who has displayed his rage against this betrayal by the president. He almost said that the president has taken steps to satisfy Americans at the expense of those who were patriotically dragged in to the war. However I do not believe that the president has betrayed any of his political team members. Yankee global masters do not condemn the political leaders who carry out their policy of defeating terrorism. Even nationalist fighters are not spared by their theory of terrorism.

After all it is Francis Fukuyama who emphasized that the threat to the liberal democracy of global capitalism is not the proletariat as it is, but the nationalists who will not agree to the system and the end of history, explained by post modernist philosophy. So, there is no way out except the total defeat of such none compromising, more nationalist- religious political movements. It is not a hidden political agenda; no it is not, but a well emphasized historic mission in the flow of history. In that sense, within global capitalist frame work Mahindra as a political leader, has done his historic duty. But liberal democracy cannot ignore war crimes, hence the masters of inquiry will find out the flaws of the military beurocratic establishment and point out who should be punished for exceeding the mandate given. Of course the political leaders will be cleared of any responsibility to the alleged war crimes.

It must be clear that the purported launch of a domestic inquiry at this juncture is in fact the execution of a slightly different strategy to combat the Government’s international challenges.  The Government has been cautious in its public statements about enlisting the support of international experts, weaving the appointments into the Disappearances Commission and the broadening of its mandate. In the guise of setting up a domestic inquiry, the Rajapaksa Administration has managed to retain the world’s foremost international war crimes prosecutors to study the same evidence that will go before the UN probe.

They are, by all accounts, eminently capable, credible, legal minds. But upon closer examination, the reasons for the Sri Lankan Government to choose these three experts become slightly clearer. They will certainly do their duty of finding any thing wrong in the war operations, any violation of human rights in such operations without however tarnishing the image of the political decision makers who were after all, fighting for liberal democracy!. So, the Commission will undertake an independent, rigorous process to ascertain the facts of what happened in the last months of the war then it will help to present a legal case for the Sri Lankan Government.

In this manner president Mahindra has developed a professional defense against mounting allegations of major violations of international humanitarian law during the execution of the war. It is clear, this is the settlement forced on president Mahinda by global masters. In other words, it will be a strong step towards the implementation of the recommendations of LLRC report. Then it is true that the ultimate goal of the gazette and the three appointments is to carry out a positive war crime investigation while building a fully developed defense for the government. Apparently the down south thinking fits dearly with that of neo liberal imperialism!