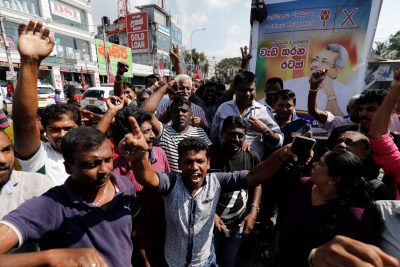 The voyage from Serendib to Sri Lanka through Ceylon continues to be an uninterrupted tale of opportunities lost, scorned and spurned. The brutal end to the quarter-century war with the Tamil Tiger separatists in 2009 brought an unprecedented opportunity for the government to heal the Sinhala–Tamil ethnic divide. But now a new front is opening, one against Sri Lanka’s Muslim minority. Events since the Easter attacks of 2019 are reinforcing the belief that tolerance and inclusive governance are a chimeric dream.

The return to power of former defence secretary Gotabaya Rajapaksa as President of Sri Lanka in November 2019 was marked by his declaration that the 24,000 people who disappeared during the country’s civil war should now be deemed dead. The appointment of the President’s brother Mahinda Rajapaksa as prime minister — under whose watch as former president the war was won —firmly signals a return to the past.

The government’s actions since then suggest that it is running low on patience with apathetic assurances of accountability as a path to resolving past conflict. In bringing national security to the forefront of electoral politics, the devastating attacks in 2019 provided the victors of the ethnic war a decisive grip in steering the outcome of promises made to the defeated Tamil minority.

In Gotabaya Rajapaksa’s message to the international community at last month’s 11th military victory celebration, the President vowed to withdraw from international organisations if they persisted in their attempts to bring the military to account for its war crimes and human rights violations. This includes the killing of about 40,000 Tamil civilians in the final months of the war — a charge that successive governments have denied. As the former defence secretary who led the charge against the Tamil separatist movement under his brother from 2005–2015, the President himself stands accused of human rights abuses which are supported by UN inquiries.

The President’s inauguration ceremony was conducted at a Buddhist temple, heavily symbolic of Sinhalese supremacy. The President has challenged the US administration’s sanctions against the Sri Lankan Army Chief — a general accused of war abuses — by appointing several other similarly tainted officials to higher offices, including another retired general as defence secretary, in doing so ceding more power to the armed forces. This was followed by a presidential pardon of a soldier who was on death row for killing eight Tamil civilians during the civil war. The President’s exercise of his right to pardon nullified the Supreme Court of Sri Lanka’s verdict, vindicating those charged with war-time atrocities.

The previous government took steps towards reconciliation by agreeing to the United Nations investigation into alleged war crimes and also to establish a special court to return land occupied by the military in the north. But progress has been tardy with negligible attempts to establish an accountability mechanism involving international judges, prosecutors and investigators. Earlier in 2020 President Rajapaksa informed the UN Human Rights Council that Sri Lanka was withdrawing from the UN resolution on post-war accountability and reconciliation.

Sri Lanka faces renewed ethnic polarisation, especially for the minority Tamils let down by the government’s persistent disregard for its post-war obligations to ensure justice and reconciliation, accountability and inclusive governance. The legacy of the war has barely altered their prospects for an equitable stake in the country. The continued militarisation of Tamil areas in the northeast and complete lack of transparency in returning occupied lands to displaced Tamils have provided a barrage of disquieting messages that substantive justice for war crimes will always elude them.

Before Sri Lanka’s economy can be rebuilt or democratic institutions revitalised, the country will need to come to terms with its legacies of violence. Despite sustained efforts by Tamil groups and human rights organisations over the last decade, the international community has done very little to secure justice for victims of war.

The increasing militarisation of a deeply divided society bodes ill for the stability of a globally strategic region and the international rules-based order. Given Colombo’s priorities, only international oversight could deliver some semblance of reconciliation to Sri Lanka’s embattled Tamil and Muslim communities. But with the international community scrambling for regional allies with an eye on combatting China’s assertive regional influence, its feeble response will continue to empower the relentless cruelty and inhumanity shown to Tamils and Muslims alike, leaving a future generation to pay the price.

The views expressed in this article are the author’s own and do not necessarily represent the views of APCSS, the US Department of Defense or the US government.