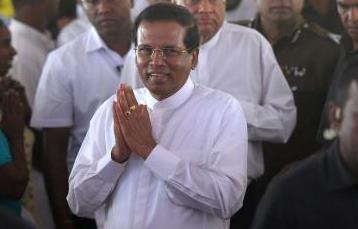 It appears that Maithripala Sirisena, Sri Lanka’s president, has reached out to America’s president-elect Donald Trump. It’s not clear precisely what language was used, though it looks like Sirisena wants Trump to help him sweep allegations of abuses that occurred during the nation’s civil war under the carpet. Alleged violations of international humanitarian and human rights law, which could include war crimes, have plagued the Sri Lankan armed forces since the war ended in May 2009.

There has been no accountability and Colombo had promised to address these allegations. After all, that was an important component of the October 2015 UN Human Rights Council resolution on Sri Lanka which the coalition government co-sponsored.

We frankly don’t know what Trump’s Sri Lanka policy is going to look like, although the next several months — including the Council’s 34th session in March — will be telling. What we do know is that Sri Lanka’s president had committed to a credible accountability process with meaningful international participation last year. It subsequently looked like international involvement would be, at best, minimal. Now it looks like Sirisena isn’t even keen on a purely domestic accountability process and that he’d like Washington’s support on that front. According to the Associated Press, Sirisena will convey a similar message to newly elected UN Secretary-General Antonio Guterres.

Sirisena’s latest move, while not that surprising, is clearly unfortunate and deserves to be met with a strong response — especially from members of the international community who have taken such comfort in, and felt so encouraged by the soaring, wildly optimistic speeches delivered by Foreign Minister Mangala Samaraweera since early 2015.
www.huffingtonpost.com