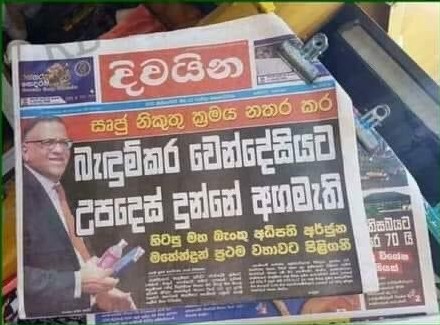 Image: Divaina lead story says that it was Ranil Wickremasinghe who advised to Bond scam!
COLOMBO (News 1st); Sri Lanka today is face to face with an economic precipice, and there are a plethora of reasons that led to this crisis.

The callous disregard to maintaining fiscal responsibility on the part of the legislature or the parliament of the country is one key cause for the crisis.

It is no secret that the parliament of Sri Lanka has miserably failed to fulfil both of these very basic functions of the legislature for many decades.

This has resulted in the country going bankrupt and it has brought shame to all Sri Lankans and our nation.

One very simple example that clearly displays these irresponsible, unsound and inept decisions is the decision that lead to the food crisis that the country is facing.

Despite how much political leaders in our country deny the facts, many international organizations have confirmed that 5 million people in Sri Lanka are food inscure and are skipping meals on a daily basis.

According to UNICEF, Sri Lanka is now ranked 7th in the world and 2nd in the region among countries with the most severe cases of malnourished children.

How did this happen?

The main reasons for this situation is corruption, fraud and malpractices.

Despite the warning of experts in the firel of agriculture, farmers and the media, an overnight decision was made to ban chemical fertilizer imports, and switch to organic fertilizer.

Parliament could have revered this unsound and ill-advices decision of the president, and ensured that food security in Sri Lanka is protected.

The Minister of Agriculture and the state minister of agriculture are responsible to parliament over the food security of the country.

But neither the ministers nor parliament had the back bone to stand up against this inept decision of the president. On the contrary they supported and promoted it.

There were many allegations leveled and evidence presented to show that this organic fertilizer project was simply another means to loot the people of this country, at a time when the entire was on the verge of bankruptcy.

Over 6 million USD was paid to a vessel carrying Chinese contaminated fertilizer, even though it never docked in Colombo.

Now the Chinese Company is demanding for compensation, and threatening to sue the country at an international court.

The Minister who promised to compensate farmers for any and every damage suffered by their crops during the organic fertilizer debacle is nowhere to be found.

Farmers are now left with no harvest and no compensation.

None of the former ministers, deputy ministers and state ministers who supported and promoted these senseless policies are willing to take responsibility for their actions now.

A Nano Liquid fertilizer dubbed by some to deliver explosive results was flown in to Sri Lanka from India by air.

Farmers repeatedly pointed out that this nano fertilizer is of no use. Just as they foretold this project too was a complete failure.

Now no one is responsible for the money that was spent on these unsound ventures fuled by empty rhetoric.

Politicians of the North Central Provincial Council were accused of misusing 700 million rupees from the Land Reclamation Commission in the guise of producing organic fertilizer.

Farmers continued to question the political elite that took these monumentally unsound decisions as to if this was the result that they desired?

Looking at the fields of the farmers, one wonders was it the Fields that flourished? Or was it the pockets of politicians that prospered?

What is even more amusing is the fact that no one, meaning not one single person has been held accountable to the wastage of millions if not billions of taxpayers rupees, and for compromising the food security of the country.

No action has been taken against those who were responsible for destroying the livelihood of farmers and crippling the agriculture sector of the country. But for us Sri Lankans this is not something new.

Do you remember the largest financial scam in the country?

Who stole from the savings of the hard working people of our country?

The scam caused a loss of 8 billion rupees to the Employees Provident fund alone.

The real loss suffered by the country has not been calculated to date.

Where is the main suspect in the case, former governor of the Central Bank Arjun Mahendran?

He is no longer is hiding.

He is speaking to foreign media on the economy of our country, while living overseas.

This is preposterous and absurd.

The former governor of the central bank Arjun Mahendran who was was complicit in looting billions of rupees from hard working Sri Lankans, had traveled overseas, is absconding  court, living in a foreign country as a fugitive, and then speaking to foreign media about the economy of Sri Lanka.

Is this not adding insult to injury of the hard working Sri Lankans whose money he stole?

Despite various assurances that Arjun Mahendran will be brought back to Sri lanka and prosecuted to the full extent of the law, the parliament of Sri Lanka has once again magnificently failed again.

Why was the tax on a kilo of imported sugar reduced from Rs.50 to a mere 25 cents?

The then chairman of the Committee on Public Finance Anura Priyadarshana Yapa, said that the general public did not get any benefit from the reduction in these taxes.

Who lined the pockets of wealthy businessmen, and friends at the expense of costing the people of Sri Lanka Billions in tax money due to the state?

Under whose direction did the Finance Minister at the time take this decision?

According to the audit report the government lost a total of 16,763 million rupees due to this tax cut. That’s over 16 BILLION RUPEES.

The money that the government gave as tax concessions to their friendly businessmen, were not available when the people of Sri Lankan desperately needed vaccines.

These are only but a few among an unimaginable amount of cases of corruption and fraud committed by none other than the people that we as Sri Lankans elect to represent us.

Instead of taking any sort of legal action against these massive acts of fraud and corruption the leaders of our country always played the people of Sri Lanka for fools.

We are not interested in party politics or individual politicians, as we have always stood with the people.

This was so in the past, it is the reality of the present and will also continue to be so in the future.