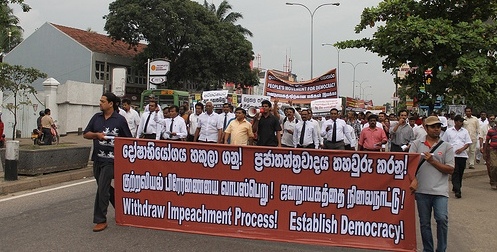 Members of Sri Lanka’s Parliament should reject the impeachment motion to remove Chief Justice Shirani Bandaranayake, that will be put before Parliament on 10-11 January 2013, the ICJ said today.
The ICJ call comes after a three-member panel of the Supreme Court, in a decision issued on 1 January 2013, ruled that the impeachment procedure in Parliament was not constitutionally valid, finding that such procedures could only be established ‘by law’ enacted by Parliament. The Standing Orders governing the current impeachment investigative process are not considered ‘law’ under the Constitution of Sri Lanka.

“The assault on the independence of the Sri Lankan judiciary in recent months has brought Sri Lanka to the brink of a constitutional crisis,” said Sam Zarifi, ICJ’s Asia Director.  “If the impeachment motion is passed in Parliament in defiance of decisions of the country’s judiciary, it will signal a massive breakdown in the rule of law and checks and balances.”

The ICJ stresses that in a democratic society operating under the rule of law, the principle of judicial review is paramount and judges have the ultimate authority to determine what the law provides.
Following the Supreme Court decision, the Court of Appeal quashed the findings of the Parliamentary Select Committee on 7 January 2013, claiming the PSC lacked authority to make such a finding.

In response to the Supreme Court decision, President Mahinda Rajapakse announced his intention to create a four-member panel on 7 January 2013 to review the Parliamentary Select Committee Report and comment on its constitutional validity. The identities of the panel members have not been revealed.

“Creating another ad hoc committee on an arbitrary basis to pronounce on the validity of the impeachment process in Parliament – a process already held to be improper by the apex Court – aggravates the insult to the judiciary and deepens the constitutional crisis,” Zarifi said. “Judges are not above the law, and should be subject to impeachment if they have engaged in serious misdeeds, but the faulty process used by the Parliamentary committee violated basic notions of due process and truth-seeking.”
Last month, the Bar Association of Sri Lanka unanimously passed a resolution calling on the President to reconsider the impeachment, warning that if principles of rule of law were disregarded in the removal process, the Bar would not formally welcome the new Chief Justice.

“This current crisis threatens to leave Sri Lanka with little or no means to hold State officials accountable for serious human rights violations,” Zarifi added. “This government has shown itself committed to imposing a climate of impunity in Sri Lanka. The Parliament should stop the country’s sad slide away from the rule of law.”
The ICJ released a 150-page report in early November 2012 focusing on impunity in Sri Lanka and highlighting the recent attacks on the judiciary as a key factor that has led to the erosion of State accountability mechanisms.
The impeachment process against Chief Justice Shirani Bandaranayake has been widely criticized for ignoring international standards and practice.

The ICJ in an earlier statement called on the Government of Sri Lanka to adhere to international standards and practice in the impeachment hearings.

The ICJ reiterates its call on the Government of Sri Lanka to take active measures to promote the independence of the judiciary and rule of law by adhering to international standards and practice in impeachment hearings.

BACKGROUND:
The impeachment motion was initiated just days after the Chief Justice ruled against the Government on a controversial bill – the Divi Neguma Bill, under which the Minister of Economic Development (who is also the President’s brother, Basil Rajapakse) would have had control over a fund of 80 billion Sri Lankan rupees (611 million USD) with minimal accountability.

Attacks on the judiciary have been escalating since July 2012. A Government Minister Rishad Bathiudeen threatened a Magistrate in Mannar and then allegedly orchestrated a mob to pelt stones at the Mannar courthouse. In early October 2012, the ICJ condemned the physical assault on the secretary of the Judicial Service Commission, Manjula Tillekaratne.

On 6 November 2012, a motion to initiate impeachment proceedings was brought against Chief Justice Shirani Bandaranayake.  The motion contained fourteen charges relating to the non-disclosure of financial assets and improper conduct of a Chief Justice.  On 8 November 2012, the Chief Justice’s lawyers responded to four of the fourteen charges, claiming that all operative bank accounts had been disclosed and only those accounts which were closed or held no funds were not declared.

On 6 December 2012, the Chief Justice and her team of lawyers walked out of the impeachment hearing in protest over the denial of a fair hearing.

On 8 December 2012, a majority of the Parliamentary Select Committee comprising government representatives found the Chief Justice guilty of four charges out of the fourteen allegations. The Committee’s released its findings despite the Supreme Court’s request in late November 2012 that hearings be delayed until it could determine the constitutionality of the proceeding.
Photo by vikalapa