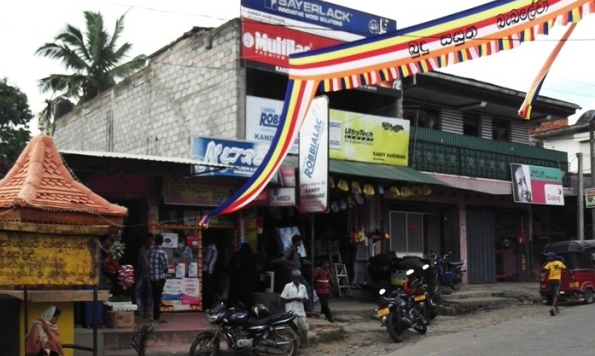 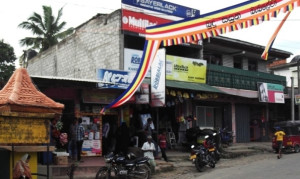 By Gamini Karunasena and Wasantha Rupasinghe

President Mahinda Rajapakse’s government is again giving tacit support to communal provocations against Sri Lanka’s minorities in a bid to divide working people amid the country’s deepening economic and social crisis. This time, Muslims have become the main target of chauvinist groups.

An organisation called Bodu Bala Sena, or the Buddhist Power Force, is in the forefront of organising violence against Muslims in various parts of the country. Like Jathika Hela Urumaya (JHU), a partner in the ruling coalition, Bodu Bala Sena claims that Muslims are a threat to Buddhism. Its declared purpose is to “strengthen and defend the Buddhist religion” and its heritage.

This organisation recently launched a provocation against Muslims at Buwelikada, a small town 15 kilometres from Kandy in the Central Province. The town’s predominantly Muslim population includes small shop owners and vendors.

A group of Sinhala youth travelling in a bus began a quarrel with Muslims, claiming that a van had obstructed the road. Several Muslims injured in the clash were hospitalised. The government immediately deployed units of the notorious police special task force (STF), whose members did not arrest the culprits, but instead were sympathetic toward the thugs.

When WSWS reporters visited the area, the police had allowed Buddhist flags to be forcibly placed atop Muslim houses and businesses. Residents said loudspeakers had also been installed on a Muslim business building, with Buddhist religious preaching continuously disturbing people.

One resident commented: “We have lived in harmony with the Sinhalese. But I can’t understand what is going to happen now.” A disgusted Muslim youth said: “These people have never acted this way. Yesterday we were inconvenienced in our religious activities because of the noise of loudspeakers.”

In an attempt to defuse the situation, Muslim organisations had helped erect a Buddha statue in Buwelikada. But extremist monks continued their communal agitation, accusing Muslims of “plundering” lands belonging to Sinhalese. Anti-Muslim posters had been pasted in the town, before people removed them. Tensions were so high that another attack and clash could take place at any time.

In November, after an unidentified group destroyed a Buddhist place of worship in eastern Ampara, a Bodu Bala Sena leader, Galaboda Aththe Gnanasara, declared that Muslim extremists were seeking to create a separate state in the east. He provided no evidence for his claims, which were calculated to provoke reprisals against Muslims. He claimed that Bodu Bala Sena was an “unofficial police force,” demonstrating the organisation’s readiness to resort to violence, taking the law into its own hands.

On January 2, Gnanasara urged people to boycott goods with a Halal label. His group demanded that the government investigate whether Islamic religious funds amounting to 80 billion rupees were being used to finance “Islamic terrorist groups” in other countries. This charge was also made without any evidence. On January 4, the Islamic Ulema organisation rejected the allegation and asked the national intelligence unit and defence ministry to probe its accounts.

Muslim religious leaders had met Defence Secretary Gotabhaya Rajapakse on December 25 seeking a solution. He “assured” them that the government did not support “incidents of extremism” and promised to look into the situation. Muslim Council chairman M. N. Ameen said it had identified 19 web sites instigating anti-Muslim sentiment.

Despite the efforts of the Muslim leaders to accommodate to the government, Rajapakse’s assurances are worthless. It is clear that the Buddhist group is planning more provocations. It has started demonstrations, led by monks, in various towns across the country to whip up anti-Muslim sentiment.

According Bodu Bala Sena’s web site, one of its aims is to “build Buddhist businesses and investors and defend them.” It is catering to business, big and small, while pitting poor people against each other along ethnic and religious lines.

Gnasara was a leader of the ruling coalition partner, the JHU. Along with another monk, Kirama Vimalajothi, he broke from it to form Bodu Bala Sena, declaring that the JHU was not militant enough to protect Buddhism. His organisation’s provocations seek to recruit disoriented poor and young people as shock troops, as part of a systematic campaign against Muslims.

It is no accident that President Rajapakse and his government are giving a free hand to this organisation and other Buddhist and Sinhala extremist groups. Successive Sri Lankan governments have repeatedly used communal discrimination and provocations to divide the working class along ethnic lines.

Decades of official anti-Tamil discrimination led to the bloody protracted war against the separatist Liberation Tigers of Tamil Eelam (LTTE). Now, nearly four years after the LTTE’s defeat, the government and the military have launched a propaganda campaign aimed at stirring up anti-Tamil sentiment by alleging that the LTTE is reviving.

With the economic situation worsening, the government has again turned to the International Monetary Fund, seeking a loan of $US1 billion. Any such loan will require even more draconian austerity measures than those already being imposed by the government under the terms of the last IMF bailout.

The government is conscious that rising working class unrest, long suppressed with the help of the trade unions, could erupt. Fomenting communalism is part of the government’s preparations for police state repression against the working people.

Workers must reject all forms of nationalism and racism. Only on the basis of a unified political fight for a workers’ and peasants’ government to reorganise society on a socialist basis can the working class defend basic democratic rights and living standards.