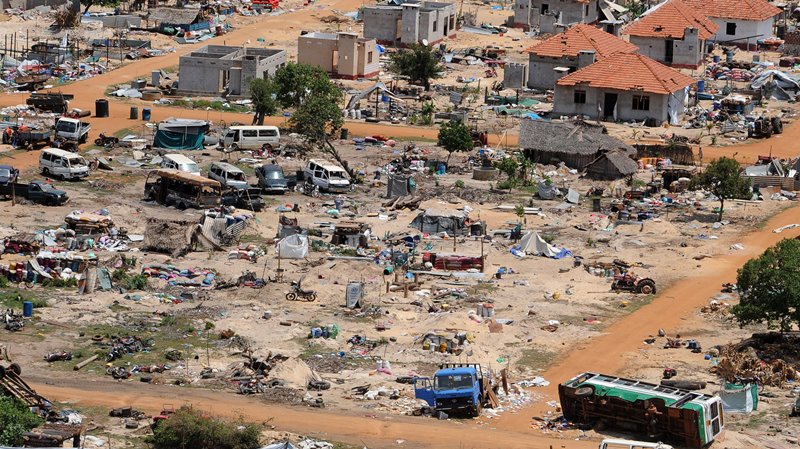 (A general view of the final conflict zone in Sri Lanka’s civil war in 2009 -Image sbs.com.au)

The United National Front Government’s final position on the UN mandated probe on allegations of war crimes in Sri Lanka was spelt out on Thursday by Prime Minister Ranil Wickremesinghe.

He told senior Army officers that the judicial mechanism would be made up entirely of Sri Lankan judges, putting to rest months of speculation if foreign judges were to be part of the tribunal. He met some hundred officers including senior Colonels, Brigadiers and Majors General at ‘Temple Trees,’ the Premier’s official residence. These officers serve in different parts of the country, most in military installations in the North and East.

The Premier’s speech came ahead of the 32nd sessions of the United Nations Human Rights Council (UNHRC) from June 13 to July 1. On June 14 Human Rights High Commissioner Zeid Ra’ad al Hussein is expected to refer to Sri Lanka in his opening remarks. Foreign Minister Mangala Samaraweera is to make a statement on the high level segment on Sri Lanka’s own performance record on the same day. On June 29, Zeid, in accordance with the mandate given to him by the Council, will present an oral update on the implementation of the US-backed resolution which was co-sponsored by Sri Lanka on “promoting reconciliation, accountability and human rights.”

Premier Wickremesinghe said in a brief speech that more details of what was ahead would be told to them at another meeting. This was when Foreign Minister Mangala Samaraweera, who is now accompanying President Maithripala Sirisena to Japan, returns to the country. He said that particularly in the North, there was a continuing need to return more private lands which the military had taken over. Army officers were in fact drawing out plans for the return of these lands. According to statistics available with them, some 58.73 acres of private land in the Jaffna area (outside the High Security Zone) are still being occupied. This is besides an extent of 86.22 acres of state land that is over and above the extent where military installations existed. Whilst some of the land area has served as a buffer, new cantonments have been established in others.

Army Commander Lieut. Gen. Chrisanthe de Silva asked the Prime Minister whether members of the security forces would be tried individually or collectively. The modalities of such a course of action are still not clear. Hence, the Premier did not respond direct to that question. Wickremesinghe also briefed them on the proposed Truth and Reconciliation Commission (TRC) that is being established on the lines of the one in South Africa. Here again, he said, they would be briefed in detail by Foreign Minister Samaraweera.

The first to declare that there would be no foreign judges in the probe on alleged war crimes was President Maithripala Sirisena. He told BBC’s Sinhala service Sandeshaya in January last year, “This investigation should be internal and indigenous, without violating the laws of the country, and I believe in the judicial system and other relevant authorities in this regard. The international community need not worry about matters of state interest.”

The very next month UN Human Rights Commissioner Zaid Ra’ad al Hussein visited Sri Lanka. In a prepared statement dated February 9 last year issued in Colombo, he said he was “reassured this morning to hear both the President and the Prime Minister state their firm conviction in this regard.” (Meaning an ‘international probe.’) He said in that statement that “Sri Lanka has many excellent judges, lawyers, and law enforcement officials. But over the years the system they depended on, and which depends on them, became highly politicised, unbalanced, unreliable. The country’s history over the past few decades is littered with judicial failures. Virtually all Sri Lankans recognise this……”

Was United States briefed?
It is immediately not clear whether the Government informally sounded out the United States or other key players in the Human Rights Council and obtained their nod in any form before choosing to go ahead with a domestic inquiry. A source familiar with matters related to the UNHRC said, “They know and appreciate our (the Government’s) position. They are mindful that we are genuinely focusing on all the issues raised in the resolution including those related to accountability. They are also conscious about our constraints too.”

The move for a domestic inquiry appears to have displeased the Tamil National Alliance (TNA) and diaspora groups. TNA leader Rajavarothayam Sampanthan told the Sunday Times, “The resolution was considerably watered down because the Government showed a positive attitude. We would request that the UNHRC resolution be implemented. There is no room for misunderstanding.” A spokesperson for GTF (Global Tamil Forum) that claims to speak on behalf of Sri Lankan Tamils overseas, said the Government should stick to the contents of the resolution and not mislead the international community.

Prime Minister Ranil Wickremesinghe meeting senior Army officers to assure them that the alleged war crimes probe will be a domestic process.

In more than one sense, it appears that a proverbial time bomb is ticking away for Foreign Minister Samaraweera when the UNHRC sessions get under way. The debate now is not only over whether a probe into alleged war crimes should be international or domestic in character. It is compounded by a more serious factor. That is Sri Lanka’s unhesitant, voluntary offer to jointly sponsor the United States initiated resolution. Thus, Sri Lanka has forfeited the right to any credible reasoning for insisting on an entirely domestic inquiry. The reality is that the Government cannot in the present local political environment carry through an ‘international’ probe. Strong opposition has built up within the armed forces and outside it to such a move. Since the adoption of the resolution, little or nothing has been done to constructively educate the armed services personnel about the ramifications or to hear their views. In that vacuum, there is strong apprehension in the minds of troops. Contrary to belief in certain sections, their dissatisfaction is by no means anti-Government in character though some senior military leaders are unable to discipline less than a handful amongst them. The best example was how troops were at the forefront in rescue efforts after the recent rains led to floods and landslides. The troops deserve all the kudos for they prevented a big loss of face for the UNF Government if they had dragged their boots. It took days for the UNF leaders to react to the floods causing much public discontent. Once more what begs an immediate answer to the all-important question – Who was responsible for jointly sponsoring the US resolution? Through the joint sponsorship, the Government has bound itself diplomatically and legally to every clause in the resolution. The move may have been to ‘soften’ the blows, but as a result every line in it has been accepted.

Here is what the resolution said with regard to probing alleged war crimes: ”Welcomes the recognition by the Government of Sri Lanka that accountability is essential to uphold the rule of law and to build confidence in the people of all communities of Sri Lanka in the justice system, notes with appreciation the proposal of the Government of Sri Lanka to establish a judicial mechanism with a special counsel to investigate allegations of violations and abuses of human rights and violations of international humanitarian law, as applicable; affirms that a credible justice process should include independent judicial and prosecutorial institutions led by individuals known for their integrity and impartiality; and also affirms in this regard the importance of participation in a Sri Lankan judicial mechanism, including the special counsel’s office, of commonwealth and other foreign judges, defence lawyers and authorised prosecutors and investigators;“

In the light of the joint sponsorship, criticism against Sri Lanka over the shift to a domestic inquiry raises questions of international credibility for the UNF Government. The metamorphosis to the current position is just within a one year period. During this time, the Government, overtaken by other issues, showed less concern. Criticism would naturally be on grounds of making a commitment before a community of nations and reneging on it thereafter. Obviously there has been a lack of foresight on the part of the Government in assuming earlier that the idea of an ‘international probe’ could be marketed locally. It has dawned on the Government only now that it is a gigantic if not an impossible task.
-Sunday Times political column