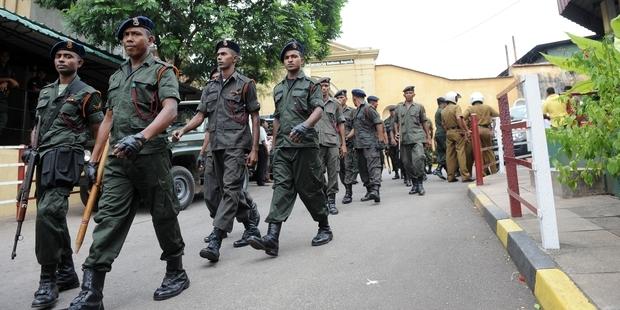 Sri Lanka’s promises on human rights should no longer be accepted by the international community, Amnesty International said as the UN Universal Periodic Review (UPR) on 1 November highlighted Colombo’s continued denial of the human rights crisis in the country and the need for independent investigations into new alleged human rights violations and past war crimes.

The UN examines the human rights situation in each member state every four and a half years, and Sri Lanka has yet to follow up on important commitments made during its first UPR in 2008, when the government was engaged in armed conflict with the Tamil Tigers (LTTE).

“Sri Lanka has been making empty promises about human rights for decades. This was made clear by a number of countries which questioned Sri Lanka’s lack of progress in ending human rights violations during the review,” said Yolanda Foster, Amnesty International’s expert on Sri Lanka.

“Three years after the end of the civil war, the government continues to stifle dissent through threats and harassment, and has failed to take steps to end enforced disappearances and extrajudicial executions.”

Human rights defenders have told Amnesty International about a climate a fear in Sri Lanka in which the state does nothing to protect them from threats.

Following a UN Human Rights Council (UNHRC) resolution in March 2012 calling on Sri Lanka to address violations of international law during the civil war, government officials and state-run media lashed out at human rights activists. They were called “traitors” and threatened with physical harm by the Public Relations Minister, prompting the UN to denounce the threats and call for an investigation.

The crackdown on dissent has extended to lawyers and members of the judiciary who speak out against abuses of power. A senior high court judge, Manjula Tilakaratne, was on 7 October 2012 attacked and injured by armed assailants after he had complained of attempts to interfere with the independence of the judiciary, a concern raised by some states today.

The authorities have continued to arrest and detain suspects for lengthy periods without charge or trial under the repressive Prevention of Terrorism Act (PTA), despite promises during its first UPR to bring this and similar legislation in line with international human rights law. No amendment has yet been made, and today Sri Lanka stressed its need to retain the PTA. Meanwhile, hundreds of people suspected of links to the LTTE continue to languish in administrative detention.

“Four years after the UN’s first review of human rights in Sri Lanka, there has been virtually no progress – as shown today – on any of the commitments the government made to end arbitrary detentions,” said Foster.

Several states today pressed Sri Lanka on its continued use of torture and other ill-treatment, despite government pledges made during the first review to address the problem. Amnesty International continues to receive reports of torture and resultant deaths in custody, enforced disappearances and extrajudicial executions.

On 26 July 2012, Sri Lanka published a National Plan of Action as a gesture to the international community that it is moving forward with addressing human rights concerns called for in the UNHRC March resolution. However, this plan is not comprehensive, particularly on issues relating to deaths of civilians, arbitrary detention and enforced disappearance. Where investigations are envisioned at all, responsibility has been given to the army and police – the very institutions implicated in these serious human rights violations in the first place.

A culture of impunity persists in Sri Lanka, as the government has not investigated, prosecuted and punished most of the perpetrators of human rights violations.

Two glaring examples of serious human rights violations where the perpetrators remain free from prosecution are the alleged extrajudicial execution of five students by the Sri Lankan Special Task Force in January 2012, and the killing of 17 Action Contre la Faim (ACF) workers in the east in 2006, one of the worst massacres of humanitarian workers in history.

The findings of a 2007 Presidential Commission of Inquiry into both cases have yet to be released.

“The persistent lack of justice in these cases is shocking and flies in the face of repeated promises by the government for the past six years that it would investigate them properly. Victims’ families won’t believe the government until some practical action is taken. As a very basic first step the 2007 commission’s findings should be made public,” said Foster.

In the lead up to this UPR, Sri Lanka’s Attorney General claimed to have directed the police to investigate the two cases.

“Why did it toke so long for the Sri Lankan authorities to order an investigation into cases this grave, and what will happen to the police inquiry when international interest sparked by the UPR dies down?,” said Foster.

After Sri Lanka’s UPR session in Geneva today, the UPR panel is set to release its full report on Monday 5 November 2012. The Human Rights Council is set to formally adopt the outcome of today’s review at its March session next year. The international community must use that to hold the Sri Lankan government to its repeated promises.
AI