Sri Lanka’s Conflict-Affected Women: Dealing with the Legacy of War 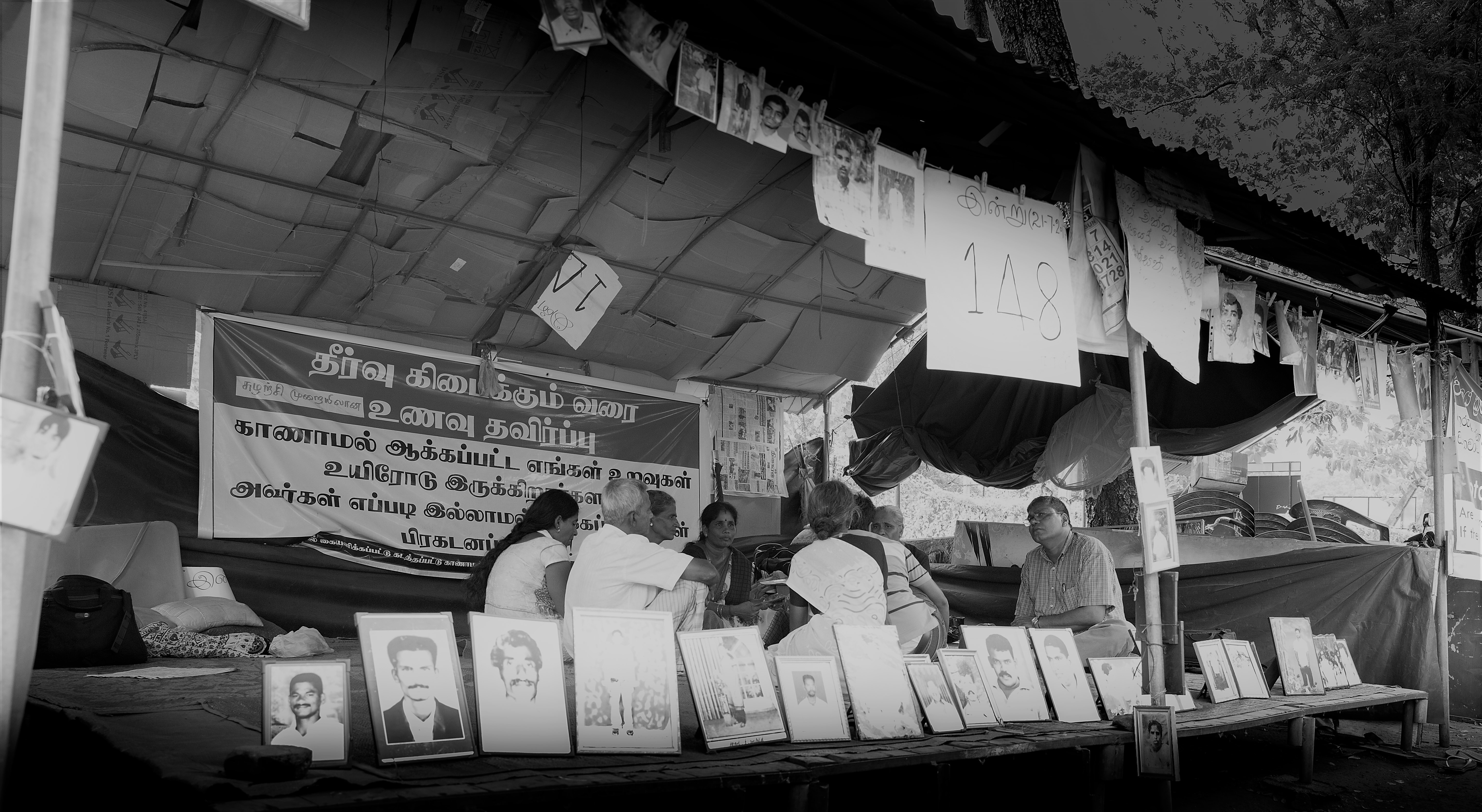 Image: Mothers of the disappeared on campaign for justice in Mullaitivu, NP. Sri Lanka. (c)s.deshapriya.

Eight years after the end of Sri Lanka’s armed conflict, Tamil speaking women in the island’s north and east are still seeking justice and truth for wartime violations. Bold promises by the government to the United Nations Human Rights Council in 2015 – including a truth commission, a special court and offices to investigate missing persons and provide reparations – have failed to materialise even as the urgent economic and psychosocial needs of all conflict-affected groups remain unmet. Anger and a sense of betrayal have generated a new wave of women-led protests and threaten to become sources of renewed grievance that damage already slim hopes of reconciliation among communities, and between the state and its Tamil citizens. If Sri Lanka is to address the past in a way that reconciles its communities and builds lasting peace, the government must prioritise the needs and rights of conflict-affected women – beginning by promptly establishing the offices on missing persons and reparations.

Despite their agenda-setting activism, women have been given little role in shaping transitional justice policies. The government largely has ignored the report of its Consultations Task Force (CTF) on national reconciliation processes, which conferred widely with women and which many hoped would re-energise government’s commitments. Occasional gestures – the release of small amounts of land or meetings by the president with families of the disappeared – are drowned out by the government’s political caution and pro-military tilt. A new constitution, which could address the causes of war and help prevent its recurrence, continues to hang in the balance.

Extensive interviews with women in the north and east make clear they want justice for crimes committed by the state and – albeit with less unanimity – for those perpetrated by the LTTE. Their most urgent demand is to know the fate of missing relatives. These women also insist that the truth and justice they seek must be part of a broader approach to meet their economic, social, psychological and security needs.

Tamil speaking women in the north and east have arguably been more affected by the conflict and its aftermath than any other group in Sri Lanka. Tens of thousands of war widows and wives of the missing have been forced to become heads of household and primary income earners, leaving behind traditional domestic roles and entering the public realm to engage politically, economically and socially. They do this in a highly patriarchal context regulated by rigid cultural and social practices, and made insecure by the continued presence of the Sinhalese military. They suffered gender-based violence and abuse throughout the conflict and continue to do so amid a breakdown in social and family structures. Most have urgent unmet socio-economic needs and many suffer crippling trauma. Muslim and Sinhala women in the north and east and other parts of the country face their own challenges arising from the war and must be better included in transitional justice processes.

The Office of Missing Persons (OMP) should be made operational immediately and given sufficient resources to set up branches in the north and east. It should be staffed with credible, independent voices, including conflict-affected women themselves. An accountability process, with international involvement, may not come soon, but it will be critical to assure that Sri Lanka can put its many ghosts to rest and mitigate the chances of future conflict.

Transitional justice in Sri Lanka has grown moribund largely because the government never tried to build public support for the process or show how it could benefit all communities. A major public outreach campaign to explain how the reparations and missing persons offices will address the legacies of war could help neutralise resistance from political rivals and the military.

Addressing the specific needs of conflict-affected women and involving them more fully in the design and implementation of transitional justice programs are essential steps, both for reducing the rising tension in the north and east and for restoring hope that the political transition promised in 2015 can still be realised.

To begin fulfilling commitments made at the UN Human Rights Council to a comprehensive transitional justice process:

Launch a major public outreach campaign to explain the benefits to all communities from the offices for reparations and missing persons and to help reduce resistance from political rivals and the military.

Immediately make the Office of Missing Persons operational, with independent staff, offices in the north and east and a role for victims’ families.

Establish the Office of Reparations, beginning by inviting public input on the draft reparations law. To design a mandate and office with Sinhala, Muslim and Tamil support, policymakers should consider public opinion along with relevant findings in the Consultation Task Force report.
Design and empower the reparations office to coordinate programs that benefit war victims and their family members from all communities.

In cooperation with the UN, donors and provincial councils, formally assess the economic needs of conflict-affected women, especially female heads of household, and devise programs that include an equitable and easy-to-understand pension scheme for victims’ families, medical support for war-disabled women, funding for the education of conflict-affected children, affordable housing and reforms that will enable widows to establish ownership or tenancy of land.

Improve psychosocial support for all in conflict-affected areas, including for those who engage with the missing persons office and any other mechanisms established, and provide comprehensive medical treatment for the victims of gender-based violence, in particular sexual violence.

Publish a list with the names of all who surrendered to military in 2009 and conduct credible and independent police investigations into disappearances, abductions and other emblematic wartime and post-war political crimes as a step toward ending impunity and building political support for a special accountability court.

Acknowledge and facilitate the right of all Sri Lankans – including family of former LTTE members – to commemorate their dead.

Ensure the continued engagement of women, survivors and members of the zonal task forces in planning and implementing the missing persons and reparations offices.

Prevent and punish sexual exploitation and violence against women in the north and east by measures that include: access to sexual and reproductive health information and services, enforcing codes of conduct for military and government personnel, deploying more female and Tamil-speaking police officers trained to respond to gender-based violence, strengthening women’s and children’s desks in police and government offices and establishing a special high court division to hear cases involving sexual and gender-based violence.

Reduce the impact of the military on civilian life in the north and east by ending the military’s surveillance of women’s homes, including ad-hoc visits, expediting the return of occupied private land and beginning to close or transfer to civilian control military-run farms, shops and hotels.
To the UN and international donors:

Develop protocols and collective monitoring processes to improve the effectiveness of economic support and reduce high debt levels in the north and east.

Strengthen political and financial support to community- and district-level women’s groups, including women members of the zonal task forces.

Review the UN Peacebuilding Priority Plan to respond better to the changing and increasingly difficult political context and any new initiatives the government may launch.