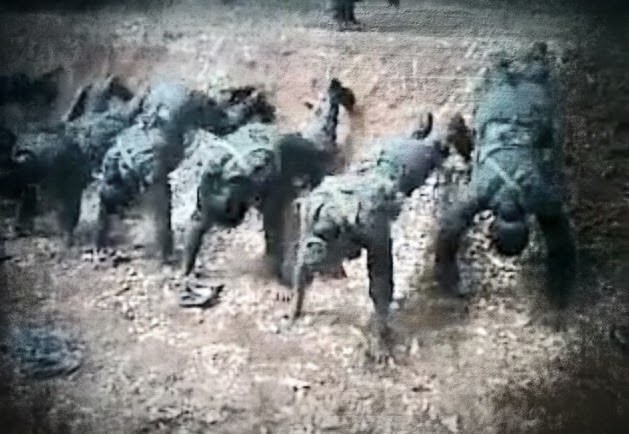 Tisaranee Gunasekara
“Evil is unspectacular and always human, And shares our bed and eats at our own table Auden (Herman Melville) For once, the military has done something sensible. It has admitted the authenticity of the footage depicting several army personnel inflicting cruel and degrading punishments on a group of female recruits .
Crimes of every sort, from rape downwards, happen in any army. But these crimes are often conducted in secret, behind at least a semi-closed door. The scenes depicted in the latest Lankan footage happen out in the open. The perpetrators seem totally at ease, almost nonchalant, with no discernible concerns about exposure, leading to censure or condemnation.

In that sense, and also because they indicate some extremely disturbing truths about a popular ‘national’ institution, these Lankan scenes are reminiscent of the footage which came from Abu Ghraib.

At Abu Ghraib, prisoner-abuse was the norm. In the footages, the uniformed torturers seem supremely at ease; they do not look as if they are concerned about being surprised in an illegal act by either peers or superiors. That very ease of manner indicated a culture of impunity which was subsequently confirmed by a high level investigation into the US army’s prison system (led by Major General Antonio Tabuga). As the legendary Seymour Hersh revealed, the resulting report’s “conclusions about the institutional failures of the Army prison system were devastating. Tabuga found that between October and December of 2003 there were numerous instances of ‘sadistic, blatant and wanton criminal abuses’ at Abu Ghraib.” The report determined that the abuses were ‘systematic’ rather than incidental.

The scenes depicted in the Lankan footage too are sadistic; only a sadist can inflict such abuse (especially on a group of weeping women) – and laugh. They are also ‘blatant and wanton’; there is no indication that the perpetrators think they are doing something ‘wrong’, a crime/misdeed which can get them into trouble. Their almost insouciant manner hints that such abusive conduct is neither unusual nor unpopular; that, as at Abu Ghraib, it is ‘systematic’.

The Lankan army’s admission of guilt, despite its tepidity, is welcome. But many unanswered questions remain. Is this how female recruits are generally treated? Or are these recruits Tamil? How widespread is this problem of perpetrating sadistic abuses under cover of discipline? Have there been any complaints about such incidents? Have any such complaints been investigated? Have any of the abusers being punished? Will the army treat this incident as an exception? Or will it carry out a thorough and impartial investigation, as the US military did and take some sort of disciplinary action?
At Abu Ghraib, the American servicemen (and women?) were dealing with the ‘enemy’. The Lankan footage depicts the way some members of the Lankan army treat their own. Imagine what such men could have done to the real of perceived enemy, especially during and in the immediate aftermath of the war. These servicemen, who seem to enjoy their grisly deeds enormously, do not look as if they would have gone into the battlefield, “carrying a gun in one hand, the Human Rights Charter in the other, food for the innocent displaced on their shoulders and love for the children in their hearts”, as President Rajapaksa claimed in his 2011 Victory Celebration Speech. On the contrary, they look quite capable of committing the sort of gruesome crimes depicted in the various Channel 4 videos.

What happens when a society is intertwined with a military, which has failed to draw an ‘insuperable line’ against abuse and sadism?

During a 2012 ceremony, the National Cadet Corps Director Major General Gamini Jayasundara praised (school) cadets who receive comprehensive training at the Rantambe army camp; he claimed that they can “face any challenge” and stated that the policy of Gotabhaya Rajapaksa was to produce “resource personnel who are confident in taking up any challenge through cadet training” .

That year the prestigious Herman Loos De Soyza trophy was won by the cadet corps of Gampaha Bandaranayake College. Less than two years later, members of the same cadet corps went on rampage, attacking the principal, teachers, fellow students and media personnel, over a minor disagreement.

This incident was a worrying reminder that in Sri Lanka excessive regimentation and burgeoning violence are harmonious bedfellows.