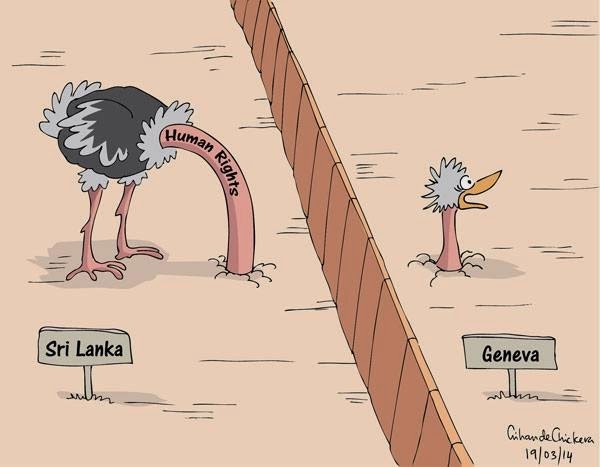 With almost exactly a week to go before a crucial vote in Geneva, Sri Lanka seems very much on the back foot. While William Hague, the Foreign Secretary of the UK makes a direct appeal to the readers of ‘The Hindu’, presenting four points in support of his country’s call for an ‘international mechanism’, his counterpart Prof GL Peiris busies himself addressing a series of meetings, not in the member states of the UNHRC but in the Southern province of Sri Lanka.
Prof Peiris should rebut each one of the four points and go on to ask his counterpart, in print, in the world’s quality press, whether the failure to conclude inquiries for 28 years into Bloody Sunday indicated a lack of political will on the part of the British state which required an international inquiry so as to further reconciliation in Northern Ireland and prevent the sporadic violence by the Real IRA and the Continuity IRA.

While in Geneva the West trots out seeming precedents for an inquiry led by the Office of the High Commissioner, Sri Lanka fails to point out that these inquiries were to do with emergencies i.e. with exceptional situations. They were to do with ongoing lethal violence of considerable magnitude and not the past conflicts, however bloody of a stable civilian democracy.

During this session Sri Lanka seems to have failed to hold a single ‘side event’, none that made the media anyway, while the West has held three, in support of the draft resolution against us. Instead the Sri Lankan Government side has contented itself with Mahinda Samarasinghe’s bluff and bluster, spiced up with the clumsy and strident statement presented by the SL Mission to justify the recent arrests (some of which have fortunately been reversed) with lurid claims of Tiger revivalism. It is a source of personal and professional pride that in 2007-2009, with many ghastly incidents happening during the civil war including the murder of Lasantha Wickrematunga, Sri Lanka never damaged its credibility in Geneva by spouting such rhetoric, which represents the complete submission of Sri Lanka’s diplomacy to the warped, discordant discourse of hyper-securitisation.

Sri Lanka’s friends at the HRC have been engaging in some sniping, doubtless in line with the requests of Sri Lanka itself. What should have been happening instead is that Sri Lanka should have mobilised its friends to engage in a broad gauge critique on the basis of principles, of the resolution’s intrusive aspect, and follow it up with a diplomatic counter-offensive. It seems as if Sri Lanka is incapable of engaging in manoeuvre in Geneva, and in the global arena in general. Sri Lanka seems incapable of initiative and mobility. It is frozen in fixed positions; maintaining a position of static and dogmatic defence along a diplomatic ‘Maginot Line’, which will collapse in a week. This is in sharp contrast to the point made to me by the US Charge d’Affaires in Geneva in 2009 and current ambassador to Kenya, Mark Storella, after the Special session of May 2009, when he observed that, as Sri Lanka’s Permanent Representative, I had been “on top of it from the start”.

Given that the UNHRC is constituted on the basis of proportional representation of the world’s demographic distribution by region, a defeat in Geneva by a significant margin would reveal Sri Lanka’s isolation in the international community, which would in turn make Sri Lanka more vulnerable, exposing as it does its weakness to its enemies, the pan-Tamil Eelamist global movement (‘the Tamil International’ or the ‘Tamil Zionists’).

In a classic example of the phenomena known in psychology as displacement and projection, the Sri Lankan state and the underlying ‘Sinhala psyche’ ( to use a phrase of my father, Mervyn de Silva) attribute this isolation to a Human Rights Council that has changed. Closer the truth is the recent remark by former Deputy Head of Mission of the US Embassy in Colombo, and later a senior official and South Asia hand of the US State Department, Donald Camp:

“…The United States and many other friends of Sri Lanka supported the government in its fight. In 2009, the military succeeded in crushing the Tigers. But the government, after winning the war, has not been able to manage the peace or rebuild Sri Lanka’s democratic traditions…President Mahinda Rajapakse and his government had the opportunity to be magnanimous in victory, and to offer the minority Tamil community clear signals that the government would respond to their legitimate grievances, and would offer a modicum of regional autonomy for the traditional Tamil heartland of the north and east. It has failed to do that…The world community supported Sri Lanka during its battle with the LTTE, and respected the country’s traditional commitment to democratic governance and to religious and ethnic tolerance…It is Sri Lanka that has changed, not the United Nations or the nations calling for action at the Human Rights Council.” (McClatchy-Tribune News Service http://www.mercedsunstar.com/2014/03/17/3552059/un-council-steps-in-where-sri.html#storylink=cpy)

The author is right when he says that the difference between 2009 and five years later, is that “it is Sri Lanka that has changed, not the United Nations or the nations calling for action at the Human Rights Council.”

What is this change? the Sri Lankan state is undergoing an unethical conversion into a quasi-theocratic ethnocracy; our government into a clan based oligarchy and our Ministry of External Affairs, its Missions overseas, and even its think tank, into front organizations of the Security apparatus (when they do not function as places of religious worship). Our diplomats have become fellow travellers and our Foreign Minister a puppet of the powerful Securocracy.

This dominance of the limited worldview of the security managers over Sri Lanka’s conversation with the world is most dangerous because it actually undermines Sri Lanka’s security and defence. With its ultra-nationalism, the security bureaucracy has imposed policies and parameters that undermine Sri Lanka’s national interests including its national security interests. It has done the Tamil Eelamists’ job for it: the isolation of Sri Lanka, making it an easier target. While claiming to be Sinhala, and indeed Sinhala–Buddhist nationalists, the blinkered super-bureaucrats have reduced the numbers of friends the Sinhalese have in the world.

If this weren’t nightmarish enough, the anti-SLMC rhetoric of the Government, and the violent threats against Rauff Hakeem by the BBS Boss are isolating the Sinhala Buddhists from the minorities even within the island. It seems to be forgotten that the numerically unimpressive ethno-lingual and religious minorities in Sri Lanka have vast demographic hinterlands of ethnic kin and co-religionists outside this small island, constituting alliances which will not permit them to be isolated.