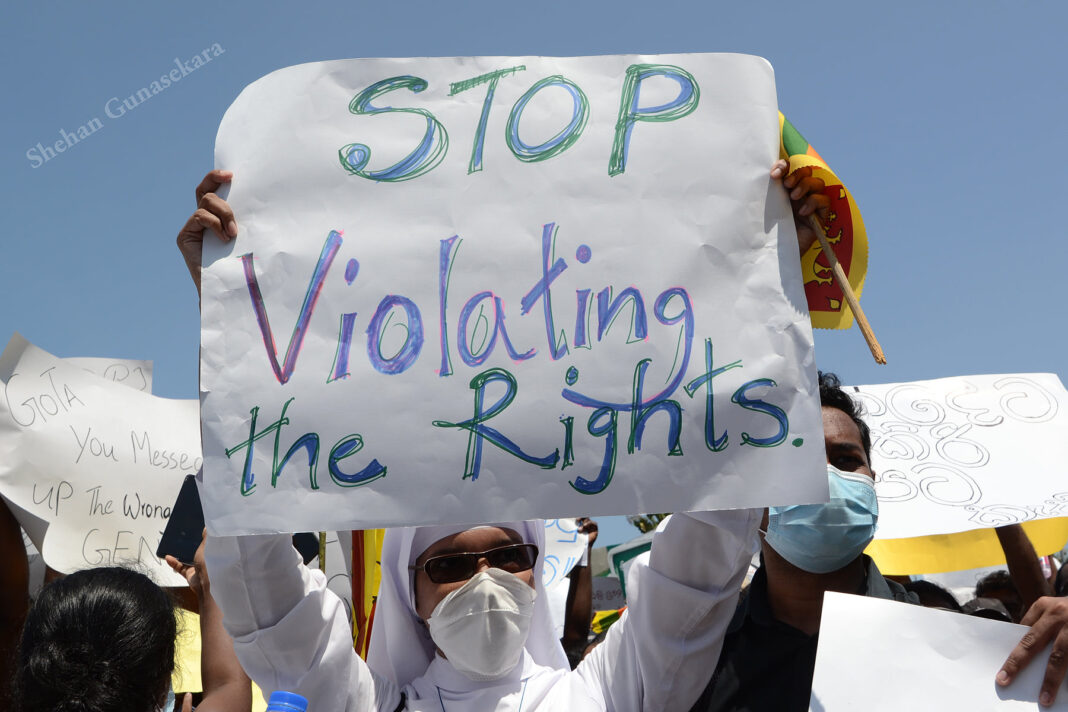 In a letter to Geneva based United Nations institutions Lawyers Forum for the People and Sri Lanka Young Journalists Association have appealed to closely monitor the situationon regular basis, including through official observation / solidarity visits to the Galle Face Green and other sites of protests 31. Exert immediate and maximum pressure on the government to;

Continuous and widespread protests in Sri Lanka and protection of Freedom of Expression, Opinion and Peaceful Assembly

A. Introduction
1. As you are aware, there have been widespread protests in Sri Lanka due to economic, social and political concerns since late last year. A month of protests in March triggered by
widespread shortages of gas, fuel, electricity, medicine, paper and massive price increases
in essential consumer goods, led to a peaceful protest at the President’s residence in
Mirihana (Colombo district) on the 31st of March.

2. After series of repressive measures (detailed in section B below), protests escalated and on 9th April, a continuous day and night protest has started at the Galle Face Green in
Colombo, including outside Presidential Secretariat. This has drawn hundreds of thousands
from across the country. The protesters have now renamed the area “Gota Go Gama (GGG
or Gota Go Village). “Gota” is a popular short name for President Gotabaya Rajapaksa.

3. Parallel protests to “Gota Go Village” have also started in other districts such as Badulla,
Galle, Matara and Kandy since last week. Protests in other parts of the country have also
continued.

B. Reprisals and violations from 31st March to 18th April

4. The Mirihana protest resulted in 54 persons including journalists being arrested and beaten.

The beatings continued even after the Young Journalists Association informed the Inspector
General of Police (IGP) and the Human Rights Commission of Sri Lanka (HRCSL). The
HRCSL had contacted the Mirihana police, but there has been no positive response. Some
were beaten till HRCSL officers visited the Mirihana police around 11am.

5. The IGP had not played a proper role and had instructed the Criminal Investigation
Department (CID) in writing that Sirasa TV station which broadcasted the protest and the
crackdown live, should be investigated.

6. Army, police and persons in civil had also entered houses in the area and attacked residents.

7. On the next day morning, when journalists visited Mirihana, Presidential Media Division had obstructed them. Although a complaint had been made to the Mirihana police and to the IGP about this, no arrests or actions have been taken.

8. This was followed by legal measures to restrict freedom of expression, opinion and assembly, such as the declaration of emergency, countrywide curfew and illegal instructions to the mobile service providers to restrict some social media applications.

9. Separately to these, a young social media activist who had supported the protests, was
abducted from his house in early hours of 1st April and police had initially denied
knowledge about his whereabouts. But after series of interventions by the Young Journalists association, lawyers and the Human Rights Commission, police acknowledged his arrest and detention and he was produced before a Magistrate just under the stipulated 24 hours and released on bail.

10. Another activist was summoned for questioning by the police on 4th April in relation to a slogan he had displayed in his car.

11. On 14th April, a Police Officer was arrested for joining protesters at Gall face and making a statement. Later he was released on bail. As there is no prima-facie criminal offence, the arrest appears to be a disproportionate response, designed to discourage government officials and police in particular, to be sympathetic and supportive towards the protests.

12. On 15th April, a dissident who had covered a public notice about a local development project which had a photo of a local politician, with a notice that this was done with public money, was summoned to the police station based on a complaint by a local politician.

13. On 16th April, when some protesters were shouting anti-government slogans, they were arrested and taken to the Wellawatte police station and subjected to cruel and degrading treatment before being released.

14. On 16th of April, number of police trucks were visible near the Gall Face protest site and later the trucks have been removed after it was highlighted in the social media. This led to widespread fear amongst protesters of an imminent violent crackdown. The Bar Association of Sri Lanka issued a statement regarding this development mentioning their concerns over attempts to disrupt the peaceful protest.

15. On the night of 16th April, a laptop was stolen from the “International Media Centre”
established at the “Gota Go Village” near the Galle Face Green.

16. On the night of 17th April, the banner at the above “International Media Centre” was stolen.

17. Journalists had noticed several intelligence personnel loitering around the “International
Media Centre” and are suspicious whether there is a hidden hand behind these two incidents.

18. On 17th April morning, police had removed the huts of protesters in Galle who had also
established parallel “Gota Go Village”. After several lawyers had intervened with the Senior
Superintendent of Police (SSP), the police had agreed to allow the protest to continue and the huts to be re-installed.

19. On night of 17th April, police had objected to the erection of a temporary tent by protesters in Kandy who had also established a parallel “Gota Go Village”. Despite some tensions, the tent was erected and the protest continued till 18th April as this was being written.

20. On 18th April, police had submitted a “fact report” to the Fort Magistrate (case no.
21838/2022) about the protests at the Galle Face Green, saying protesters had caused
inconvenience to public using the road and pavement at the Galle Face Green and also saying that disposal of non-biodegradable items used by the protesters and use of loudspeakers is causing environmental damage. Police appears to be misleading the court through this reporting, as there has been very organized collection of garbage by protesters themselves, the area had been kept clean despite the large numbers gathered and heavy rain on some days, only small sound systems have been used which were only reaching the protesters and immediate passersby and the overwhelming reaction of the public walking or driving through the Galle Face Green has been to express support to the protesters. Police have hinted at potential breach of law and order and aggressive behavior by the protesters, drawing fears that they may use this in the future to disrupt or disperse the protest.

21. On 4th April, Mr. Thilina Gamage was appointed as the Magistrate in Fort (Colombo 1). He had faced allegations of not being impartial during previous tenures as Magistrate and
investigations into some complaints against him are still pending. The Galle Face Green falls under jurisdiction of the Fort Magistrate and this appointment has raised concerns whether this is an attempt to seek judicial sanction for disruption or dispersing of protesters at Galle Face Green.

23. The newly appointed Minister in charge of Public Security and the police is one who had
alleged about “political extremists” involvement at the 31st March Mirihana protest at a press conference. He had alleged the involvement of members of a political party at the Mirihana protest in a manner implying that they too were involved in the violence, at the above press conference and again in parliament. This leads to serious concerns about hostile attitude and response of the police towards the protests and protesters.

24. We also receiving information that the government is now considering non legal means to suppress the protests. One such effort has been to try and use racism to disrupt protests.

During a small pro-government protest and in social media, derogatory remarks have been
made about ethnic and religious minorities, although protesters have continuously rejected
racism and insisted on unity amongst all races, religions etc.

25. On 15th April, a video clip showing army personnel at the Ganemulla (Gampaha district) army camp, being trained in protesting uttering anti-government slogans was circulating on social media. This came in context of messages circulating expressing fear about members of armed forces or others joining protests, chanting anti-government slogans and creating conflict with armed forces, which could then be used to disperse protesters.

26. There is fear that there will be organized groups deployed to disrupt protests by engaging in violent acts. Such plans also had been revealed in parliament by MP Vijitha Herath. This was seen during the 31st March peaceful protest near President’s residence in Mirihana, including the burning of a bus belonging to the Army.

27. If above happens, and / or there is serious repression of protests, there is possibility of
widespread protests on a much larger scale. There is also fear that persons within the police and armed forces will be used to suppress protesters and those who are supporting them. These may lead to bloodbath.

28. The present president has been implicated in many serious human rights violations and crimes against protesters, dissident journalists and civilians, when he was serving as the Secretary to the Ministry of Defense. One is the shooting to death of three civilians and injuring many others during protests demanding clean drinking water in Weliweriya. The editor of the Sunday Leader newspaper, Lasantha Wickramatunge was murdered after he accused the present President about defraud in the purchase of MIG aircrafts and investigations have also revealed that there were attempts to accuse the LTTE of this crime. Court records indicate that the present President is also implicated in the abduction of journalist and cartoonist Prageeth Ekneligoda. Investigations have also revealed that army personnel were involved in the abduction and torture of journalist Keith Noyar. Suspicions about the involvement of the present President in this incident has emerged when phone records were analysed. Senior Superintendent of Police (SSP) Shani Abeysekera who led investigations into above incidents and was removed from the Criminal Investigation Department (CID) soon after the election of the present President and later, the SSP was arrested on false charges.

29. There are also serious allegations against the present Senior Deputy Inspector General (SDIG) of police in charge of the western province. Based on extensive investigations, he was due to be arrested by the CID for hiding evidence in the abduction and torture of journalist Poddala Jayantha, but this was stopped when Gotabaya Rajapaksa became president. He has also faced charges in a disciplinary inquiry for not taking actions despite availability of prior information in relation to Easter attacks. He had then threatened a journalist who had questioned about this and a complaint to the IGP about this threat had not resulted in any actions. Persons from within the police force are alleging that he is trying to get the police to implement illegal orders of the government and it is deeply problematic that a officer like this is heading the police force in the western province at a moment like this.

30. Closely monitor the situation on regular basis, including through official observation /
solidarity visits to the Galle Face Green and other sites of protests 31. Exert immediate and maximum pressure on the government to;

32. Intervene to protect and support those whose freedom of expression, opinion and assembly and especially the right to protest have been violated or face imminent violation.

Thank you.
Sincerely yours,